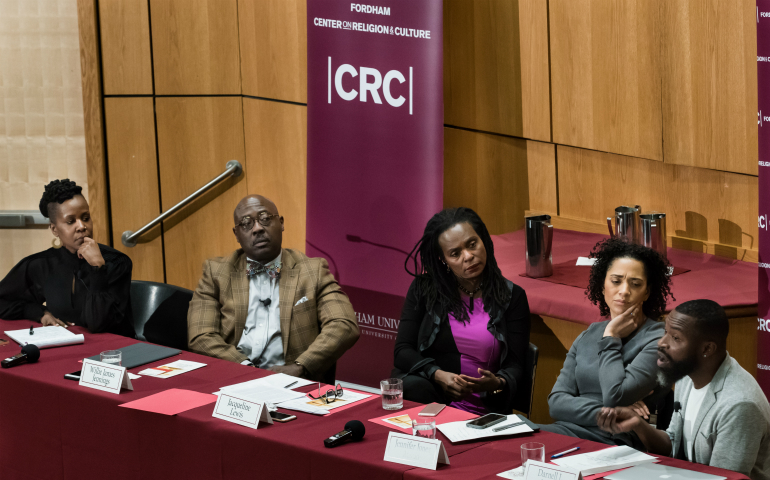 The specter of Donald Trump's one-month presidency hung over a Feb. 21 seminar on racism and religious faith here sponsored by Fordham University's Center on Religion and Culture.

"Over the past few months our country has been engaged in a vociferous call and response," said Aimee Meredith Cox, of Fordham's Department of African and African-American Studies.

"I sense the fierce urgency of the now," said keynote speaker Willie James Jennings, a professor at Yale Divinity School.

The activist speakers, with roots in the African-American Protestant tradition, said that faith in America is still tied into a norm of whiteness. The depiction of a pale Jesus was cited frequently. Speakers argued that the routine invoking of the Christian Savior extracted from his Middle Eastern origins has contributed to racism.

While citing the long supportive relationship between racist views and churches, the panelists argued that this past election season illustrated again how deeply race affects Christian Americans. They lamented how many white evangelical Christians and white Catholics lined up behind a candidate who regularly voiced racially inflammatory sentiments, describing the lives of black Americans as a cauldron of violence and despair, stating Mexicans were rapists and murderers, and that Muslims should be banned from the country.

"Where was the church?" asked Jennifer Jones Austin, an attorney and CEO of the Federation of Protestant Welfare Agencies. She offered an answer: "The church elected him."

Trump is often depicted as a capitalist secularist. But, said Jennings, he has learned to speak in theological terms attractive to white evangelicals, who voted for him by a margin of four to one.

"He is speaking in theological code," said Jennings. He later told NCR that examples include Trump's frequent references to Vice President Mike Pence, an evangelical Christian, as a moral and upright man. Another example is Trump's frequent references to a culture under assault, language that resonates with many evangelicals who see themselves as powerless against the elites of Hollywood and Manhattan.

Trump's sliver of humility during the campaign, his convention acceptance speech in which he acknowledged his own fallibility, was directed at white evangelicals, said Jennings. Evangelicals were told to view the thrice-married billionaire, who bragged about his libertine lifestyle in the New York tabloids and on the raunchy Howard Stern Radio Show, as a wounded vessel selected by God to avenge cultural transgressions such as legal abortion and gay marriage. It worked.

Evangelicals who voted for Trump tended to see him, "as the fallen king who God has chosen," akin to the biblical David, a sinner, said Jennings.

The religious appeal of Trump has its roots in racialized American religious history, particularly the invoking of the biblical promised land that morphed into Manifest Destiny, he said. Trump's appeal to nationalism is part of that tradition.

Darnell L. Moore, a correspondent at MicNews and a writer in residence at Columbia University, also analyzed Trump's religious appeal. Trump's designated minister, televangelist pastor Paula White, invokes a prosperity gospel, the belief that God's favor is shown on those who have money. White, who spoke at inauguration events, hijacked the style of the African-American church, but little of its Gospel substance, he said.

Jacqueline Lewis, senior minister at Middle Collegiate Church in Manhattan, said her racially-mixed congregation, which also includes gay and straight families, was devastated by the election results, seeing it as a reproach to the Gospel.

Her church, she said, preaches a Gospel focused not on glorifying wealth but on a view that God chose to incarnate himself as "a Jewish outsider baby" who grows up to be "a mixed-race outsider, a scary outsider, scary enough to be murdered."

When the church became a legal part of the Roman Empire, that Jesus vision eroded, she said, and was brought to this country with racial baggage removed from its original vision.

Moore said the God who is white, heterosexual and patriarchal, "is not the God the righteous are called to serve."

Lewis said that in the age of Trump, preachers should embrace the outsider Jesus, who is a prophetic witness for the dignity of the oppressed. It is time, she said, to overturn the high value Christians have traditionally placed on being nice. The age of Trump is not the time for nice. Preachers, she said, at times like this need to be unafraid to preach the social justice gospel, no matter who it may offend.

"Nice means pastors don't speak the truth," she said. "If the preachers aren't honest, we are going to hell."