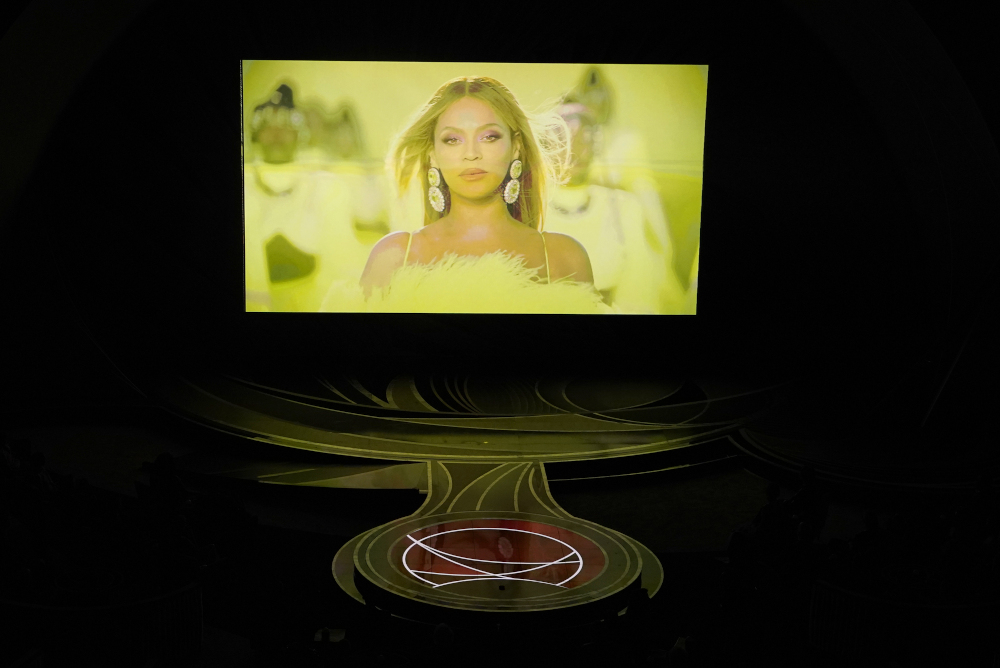 Beyonce appears on screen as she performs the song "Be Alive" from "King Richard" at the Oscars on March 27 at the Dolby Theatre in Los Angeles. (AP/Chris Pizzello)

"Lord, place me … I want to be centered in thy will." Mixed with the sounds of the iconic pioneer of New Orleans bounce music, DJ Jimi, these words, written by Elbernita "Twinkie" Clark of the famed gospel group The Clark Sisters, provide the foundation of "Church Girl," a stand-out track on Beyoncé's recently released seventh studio album, "Renaissance."

Blurring the lines between the sacred and profane, the Houston-bred icon — and church girl herself — offers a meditation and anthem celebrating healing, evolution and the power of authenticity.

It makes sense that Bey would enlist The Clark Sisters for such an undertaking.

Trailblazers in their own right, they pushed the limits of gospel music in ways that made many church folk clutch their pearls. No more was the fear of their impact more evident than when the leadership of their denomination, The Church of God in Christ, forbade their mother, Dr. Mattie Moss Clark, who served as the international minister of music, from performing with her daughters again following the 1983 Grammy Awards. To them, the Clark Sisters were becoming too secular, and, though she was their mother, she was first and foremost a leader within the denomination, and representing them in the highest order mattered more than anything.

And, as "Renaissance" is an ode to Black disco, house and ballroom culture, a Clark Sisters sample is the perfect choice. As Black queer Christians were continually being pushed out of church due to violent theologies and in search of sanctuary, parties and clubs became a refuge. Stories about how it felt to be in the middle of the dance floor when "You Brought the Sunshine" dropped made it clear that Spirit is everywhere. When those among us could not feel God in the church, we caught the Holy Ghost in the club — soundtracked by five sisters from Detroit who only wanted to do the will of God.

But perhaps it's hearing Twinkie's voice behind Beyoncé, singing, "I've been up and I've been done … felt like I've moved mountains," that makes this song otherworldly. While aspects of her life's story have become the stuff of Black Church folklore, the 2020 Lifetime biopic, "The Clark Sisters: First Ladies of Gospel," offered real insight into Twinkie Clark. From believing her dreams had to take a back seat to those of everyone in her family, to a shady business deal that cost her everything, to loving the wrong man, to a sometimes strained relationship with her mother, to a mental health hospitalization and everything in between — Twinkie embodied the struggle and resilience of every church girl who wants to love God and their mamas and find a way to love themselves. And her character, played by Christina Bell, echoed our sentiments in a scene where Clark, played by Aunjanue Ellis, scolds her daughter for saying she's doing all she can to please her and not God. Twinkie painfully confesses, "I don't know the difference."

And yet with "Church Girl," Beyoncé is encouraging us all to discover that difference and live into it. To embrace the truth that our lives belong to us and no one else. That the judgments of others — though real and often painful — are only illusions and should never restrict the freedom that has always been ours. "I'm warning everybody … soon as I get in this party … I'm gon let go of this body … I'm gonna love on me." Something supernatural happens when we tap into the power of loving ourselves and resisting the narratives that say we should look, think and live a certain way to be considered a Christian woman.

But embracing that reality isn't as easy as it seems. Could that be why Bey made certain that, on the album, "Church Girl" follows the lead single, "Break My Soul" — an anthem that reminds us that these powers ultimately don't win, no matter how brutal they are? That, after all the decolonizing of our faith and walking away from harmful theologies, we can take our "new salvation," build our own foundations and thrive. After all the work we've done to be well, we deserve to dance. We get to pop it, drop it and shake it — and every bit of that is holy.

Everywhere, Black women of faith are refusing to accept the lie that we cannot live into what we know to be true about who we are — and it be counted as sacred.

As much as I love this song — and to be very clear: I love it — what I love most is that Beyoncé doesn't just give church girls permission to dance, she also defends us. In a world where pastors go viral weekly condemning single Black women for breathing and accusing us of living in ways that diminish Black men, our sister comes to our defense. "She ain't trying to hurt nobody … she just trying to do the best she can … happy on her own … with her friends, without a man." Because, in the fullness of who we are — regardless of our socioeconomic or relationship statuses, we have been and always will be enough.

Something is happening. Everywhere, Black women of faith are refusing to accept the lie that we cannot live into what we know to be true about who we are — and it be counted as sacred. We are sexual, sensual and spiritual. We are religious, ratchet and righteous. We are human and we are holy. And as we continue to own these truths for ourselves, it will be the starting point for the generations of church girls coming behind us.

There will be those who will rail against this song. They will call it demonic, suggest it confirms Illuminati rumors and say that no self-respecting "woman of God" should want to be a "church girl."

When you, like Bey said, are "finally on the other side" of pain and heartache — smiling and "swimming through the oceans" of your own tears, you really couldn't care less what people think. Because you are alive and free. And being centered in a will that allows you to flourish in that kind of radical, life-changing, authentic truth is the only thing that matters.