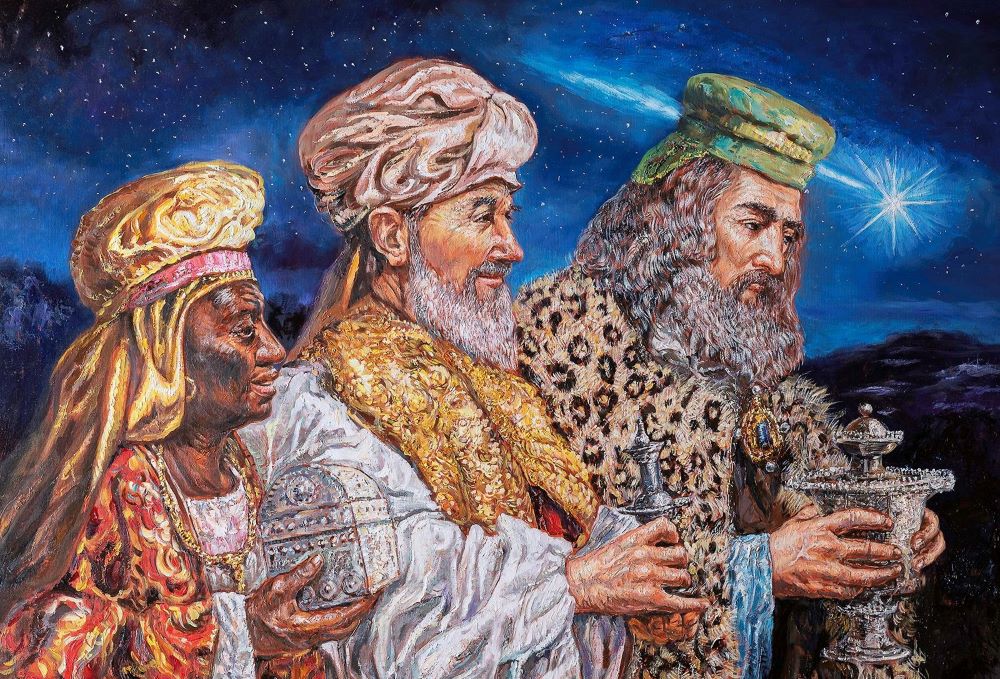 An image of the Magi is featured on one of the Vatican's 2021 Christmas stamps. The images on the stamps were painted by Adam Piekarski, a homeless man from Poland living in Rome. (CNS illustration/courtesy Vatican Philatelic and Numismatic Office)

When I was a child, the small nativity scene my family displayed at Christmas included only a single king rather than the traditional three. Perhaps two had gotten lost before my family inherited the set, or maybe it only came with one. In any case, my mother went from store to store in search of two more magi — but here she ran into another problem. Magi figures were only available in sets of three. 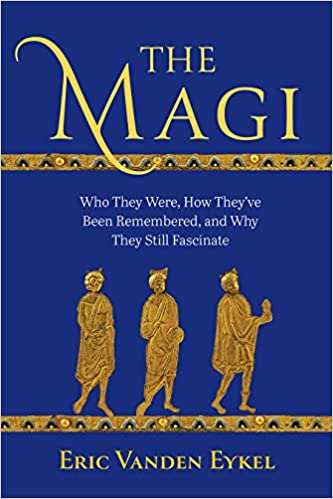 The Magi: Who They Were, How They’ve Been Remembered, and Why They Still Fascinate
Eric Vanden Eykel
218 pages; Fortress Press
$28.00

This is how my family came to have four Magi in our crèche. Although some family members voted to leave one in the box, setting up this nativity display became one of my Christmas responsibilities and I dimly remembered a story about a fourth magi. So as a youngster I decided all four should be displayed.

In the introduction to his erudite and highly entertaining The Magi, author Eric Vanden Eykel invites his readers to imagine the nativity scene. Who is included in our mental images? The Holy Family, of course, but who else? Shepherds? Sheep? A donkey? A drummer boy? Maybe an angel or two? Is there a star shimmering overhead? What about those Magi?

I teach seventh grade New Testament in the suburbs of Chicago, and either due to terrible pacing or sheer dumb luck, the last chapter of the textbook I was able to cover before Christmas break was on the infancy narratives. I started these Advent lessons with Vanden Eykel's visual thought experiment, asking my students to sketch their own particular mental image of the nativity scene.

My young teens' drawings supplied the usual cast of characters: After the Holy Family most frequently came a trio of well-dressed gentlemen carrying gifts. We discussed how only two of the four evangelists, Matthew and Luke, included stories of Jesus' birth, and how virtually all my students' images combined elements and characters from both Gospels. Only Matthew includes the Magi, and a close re-reading of Matthew's second chapter shows that what we think we know about these figures is much more than Matthew actually tells us.

One service that Vanden Eykel provides his readers is to clear away what we think we already know about the Magi, and to allow us to gaze on the scene with fresh eyes. For instance: How many magi were there? Nearly everyone would answer, "Three, of course!" Often the three are even named: Caspar, Melchior and Balthazar. But Matthew doesn't actually supply this information. 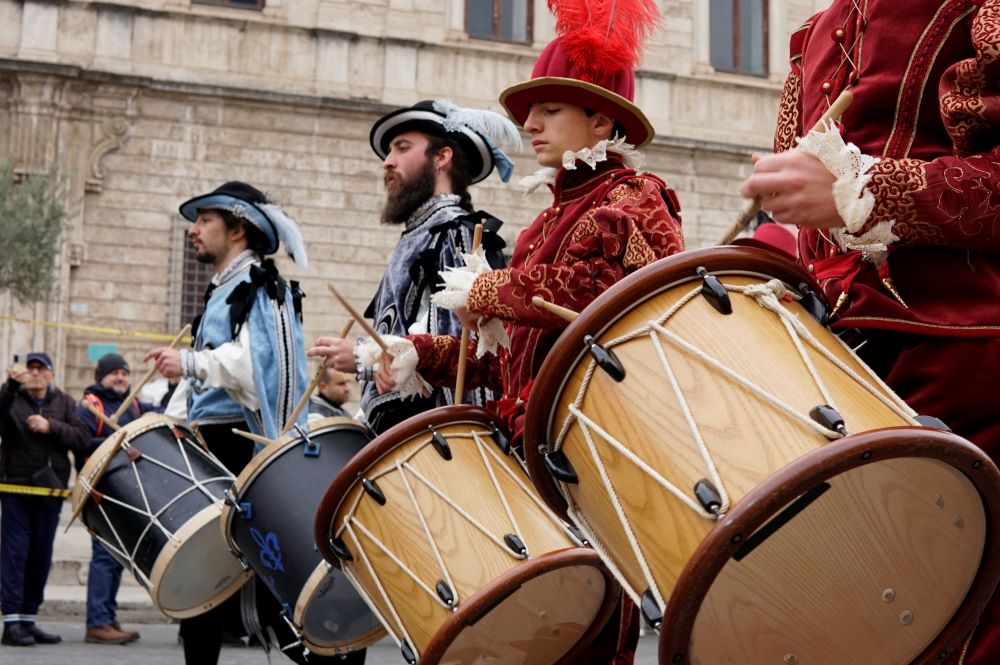 Drummers participate in a parade marking the feast of the Epiphany in Rome near the Vatican Jan. 6. (CNS/Justin McLellan)

In Matthew, the unnamed and unnumbered Magi arrive with three types of gifts: gold, frankincense and myrrh. Who are they coming to find? Jesus, of course, but how do they refer to him? The translation most Catholics are most familiar with is "the newborn King of the Jews," but Vanden Eykel suggests that a more precise translation would read, "the one born King of the Judeans."

Since the Magi refer to Jesus with this title in front of King Herod, the difference in translation matters a great deal: The second translation more directly calls into question the legitimacy of Herod's Rome-backed hegemony over Judea. We know from history that Herod was paranoid and power-hungry, but this reading might help us further understand the jealousy and rage that led to Matthew's story of the "massacre of the innocents." Whether the Star of Bethlehem that led the Magi on their journey was a star, a planetary conjunction or a comet, it too posed a challenge to Herod’s kingship, as astronomical phenomena were commonly believed to mark the arrival —or departure — of great rulers.

I grew up calling the Magi the "Three Kings," but a literal translation would be something like "magical people." The word has been translated as "wise men," and "astrologers," but we often just say "kings" instead. When the word "magi" occurs elsewhere in Scripture, it is not often in a positive light. The word connotes a foreign quality that can explain the multiethnic appearance of the trio, but has also provided fodder to Judeophobic readings for centuries. Vanden Eykel reminds us throughout his book that there are very real consequences to debates about interpretation and translation, and that this is true whether the Magi were historical individuals or, as he suggests, literary figures.

Vanden Eykel is an expert on Christian apocrypha; and it's a good thing, for if the author were working only from Matthew’s Gospel he’d have almost nothing but speculation. Vanden Eykel does use the text of Matthew to ask questions and challenge assumptions, but he also traces the story of the Magi’s visit to Bethlehem through more creative means as well: from apocryphal and patristic texts, down to modern popular interpretations such as O. Henry's 1905 short story "The Gift of the Magi" or Christopher Moore's 2002 novel Lamb: The Gospel According to Biff, Christ's Childhood Pal. I did not expect in a work of biblical scholarship for there to be so much attention paid to Monty Python's "Life of Brian"!

But while Vanden Eykel does keep his readers guessing and entertained, his traditional scholarship is still top-notch. In The Magi, even the footnotes are fascinating.

Despite the fact that the entire story of the Magi comprises 12 short verses in Matthew's Gospel, Vanden Eykel writes that, "aside from Jesus, Mary, and a handful of others, there are few characters in the history of Christianity who have exercised a more profound influence on our collective imaginations." The author deftly connects the foundation texts of this story and shows his readers where the seeds of our assumptions about the Magi were sown — and how they grew to lend light, color and fragrance to our lives at Christmas and Epiphany.

I will close with a final story Vanden Eykel mentions in his last chapter. According to a relatively recent (1896) "apocryphal" text, The Story of the Other Wise Man by Henry van Dyke, a fourth magi named Artaban accompanied the more familiar Caspar, Melchior and Balthazar from the East, but was delayed, helping unfortunate travelers he met along the way to Bethlehem. By the time Artaban finally got to Judea, 33 years had passed and his arrival now coincided with Jesus' crucifixion. The old pilgrim was rewarded for his labors of charity with a vision of Christ before his own death.

As a child I always left the figure of the fourth Magi a bit off to one side of the crèche, hiding behind an evergreen tree that would have been somewhat out of place in the Holy Land of the first century. Eric Vanden Eykel and his book showed me why, even as a child, I already had a space reserved for Artaban — both in my nativity scene and in my imagination.