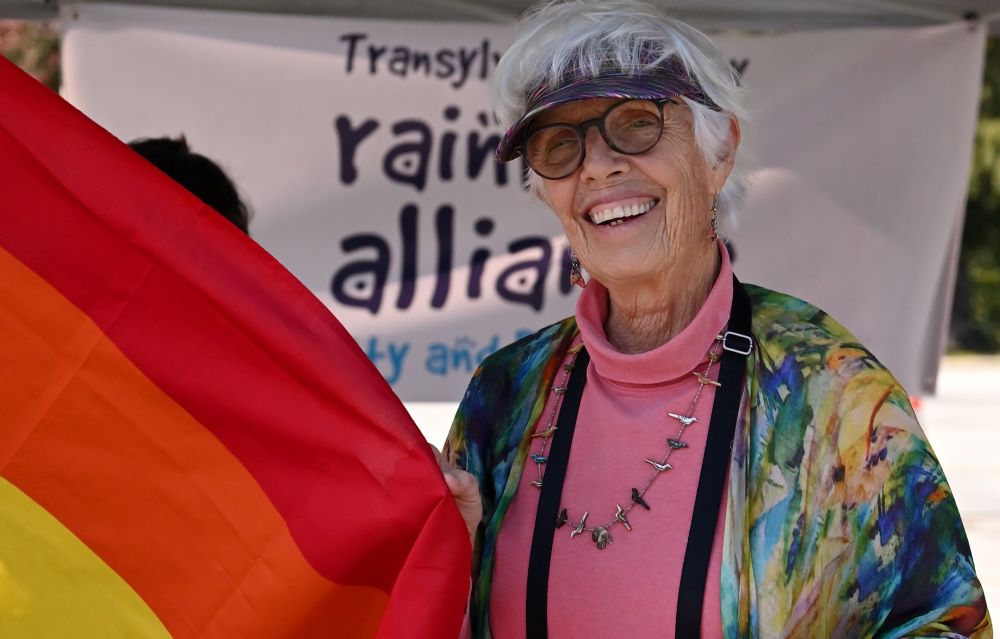 Carter Heyward, an Episcopal priest ordained in 1974, appears at the Freedom Festival in Brevard, North Carolina. (Courtesy of Darlene O'Dell)

I first became aware of feminist liberation theologian Carter Heyward on July 30, 1974, when I was 11 years old.

I was reading the local newspaper at my family's home in South Carolina and, among stories reporting the death of Cass Elliot and the chaos surrounding the final days of the Nixon administration, ran one about Carter and 10 other women. These women had defied the hierarchy of the Episcopal Church and, at the Church of the Advocate in Philadelphia, been ordained as priests. They would quickly become known as the Philadelphia Eleven.

For the next few years, I followed the media storm around their ordinations — the coverage on The Evening News, the appearance on Phil Donahue TV show, the articles in The Washington Post, The New York Times and other major newspapers (and local ones like my own). I saw the Ms. cover featuring Carter under the headline "Who's Afraid of Women Priests?"

These were years when conversations concerning civil rights, women's rights, the American Indian Movement, Earth Day and Roe v. Wade were part of everyday conversation. As I was about to enter adulthood, I could see that new possibilities were being opened by the generations before my own. 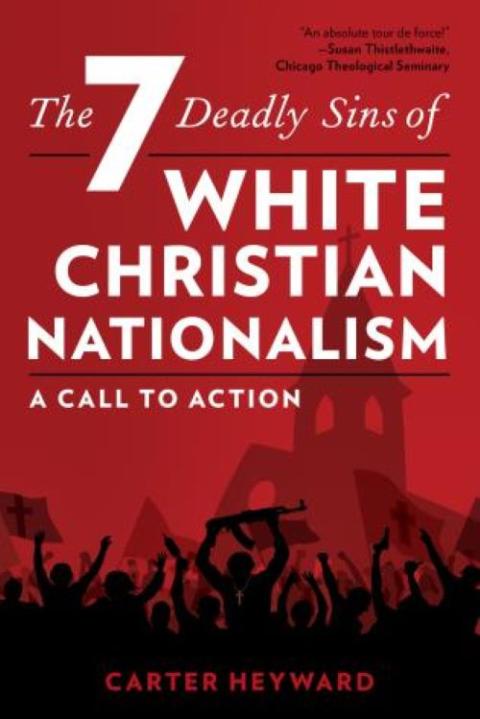 Book cover for "The Seven Deadly Sins of White Christian Nationalism: A Call to Action' by Carter Heyward

In 2005, I moved to the Appalachian Mountains in North Carolina, and, as it happened, to the town where Carter and others had established a small mission church on a horse farm. They named the mission St. Clare's and met in a room connected to the stables.

I began attending the mission and learned something else about Carter. I witnessed her attending privately to the needs of people who could not repay her, including a woman experiencing homelessness. I watched Carter secure a home for her and find her a job working with animals, the woman's passion. In the meantime, Carter took her to dialysis appointments and assisted her with maneuvering the complicated world of disability and Social Security. No magazine covers, no stages, no microphones.

In the end, Carter presided over the woman's small memorial service that was held in the soft sand of the horse ring, next to the stables and St. Clare's. I came to understand Carter's actions as the continuing "love story" from her earlier theology — that commitment to relationality and interconnectedness — now resonating in a new century and a new millennium.

How, then, does her voice speak to the crisis that the faith is currently experiencing, in a culture where fascism, insurrection and Christian Nationalism have become words we find ourselves repeating with frightening regularity? 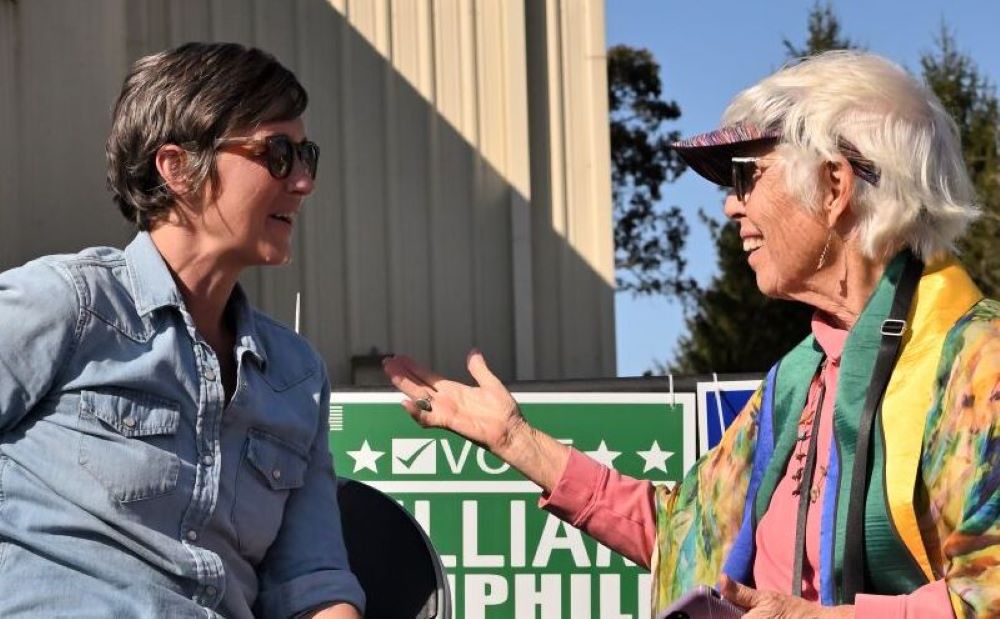 Carter's newest book, The 7 Deadly Sins of White Christian Nationalism: A Call to Action, was published this fall. She tells her readers that she has written "to encourage study and action among Christians and other Americans who know something is wrong and has been for a very long time." While her message continues to be one of mutuality and connection, these concepts sit side by side with an analysis of evil and cruelty. She writes of "spiritual renewal" and "reformation," within both the nation and the faith, and calls into doubt the message behind "make America great again," a slogan she describes as a "white, patriarchal, Christian, militaristic bastion of unregulated capitalism."

Carter names the sins of white supremacy, entitlement, misogyny and violence (among others), then devotes the final third of the book to identifying directions for action. Chapters include "Approaching the Blackness of God," "Empowering Women" and "Belonging with Earth and Animals."

Recently, we sat down in Brevard, North Carolina, to discuss her new book.

NCR: What have been the influences on your theology, which seems very different from that of Christian nationalists?

Carter: I have always been very, very compelled by the prophetic literature of the Hebrew Scripture and by what has always seemed to me the power of Jesus' connectedness with the people around whom he lived and worked and taught and healed. He says early on that he has come to fulfill the vision of Isaiah to help the oppressed go free — and to feed the hungry and to welcome the stranger. It's the basis of his ministry. He's basically saying, "It's what I'm here to do." And that's what the prophets said we're all here to do.

I just don't see how anybody can take seriously the Christian Bible and not understand the extent to which love of God and neighbor (and the making of a more justice-loving world) is key to what the whole book is about and what the life of Jesus was about.

How do you think your theology affects your political views?

When we are most Christian in our bones and walking in the footsteps of Jesus, we really do put matters of faith first — and by that I include justice and equality and human well-being and creature well-being and kindness and mercy and humility — all of that comes first. That's what shapes our politics. I want politics that reflect my spiritual values.

How do you separate yourself from Christian nationalists who also draw a connection between faith and politics?

I believe that Christian nationalists have it upside down. They want a faith that reflects their politics (instead of a politics that reflects their faith), and they will contort and do anything they need to with the Christian Gospel and Christian teachings to figure out how to support a figure like Donald Trump and still consider themselves good Christians. They believe they need him in place in order to be faithful to the God they have come to believe in, but the God they have come to believe in is subservient to Donald Trump.

Finding enemies, perceiving enemies, under every rock — that's what the far right does right now and that's what the Christian church is doing. I see absolutely no sign, no hint, of the life and teachings of Jesus in that church that is teaching hatred of your opponents and legitimizing violence against them.

At the end of the book, you pose a question to your readers. It's in your chapter about the environment, and you ask readers to consider whether we are already lost as a species. I'm wondering how you would answer that question for yourself.

I don't think all is lost, but I think all can be very, very bad for many of us, as it is for many people in the world, unless those of us who really do believe that humanity has a future figure out better how to love one another. I want very much for the younger generations to pick up these issues and take them and do with them what they will. To me, the most dismal thought is that younger people will think it's hopeless and that they are just going to live their lives as well as they can and then hang it up and not worry about the future.

I really do hope that we have coming along behind us hordes of idealists and younger people of all colors and cultures and religions and genders who are going to say, "You know, we can do it differently. It can be better because of us."