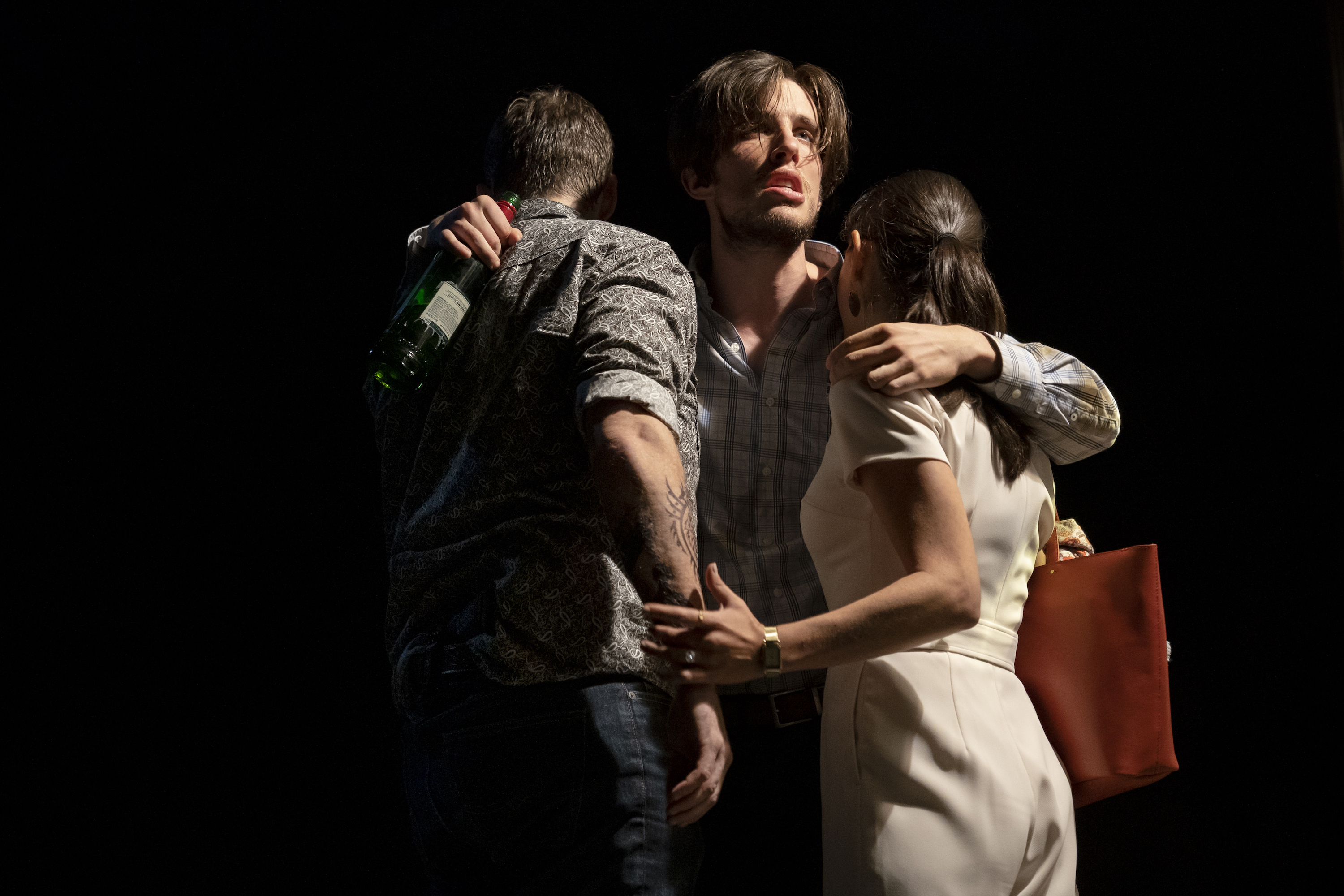 The play opens to a dark stage. So dark you almost squint. It gets just bright enough to take in the scene – the back porch of a home and the profile of man sitting with a gun in hand. A gunshot rings through the theater, startling almost everyone. It's dark once again. When you see the man next, he's carrying his prize – a deer. He proceeds to gut it, but not before trying to steady his trembling hands. Much like Macbeth, this man, Justin, is quite concerned about the blood he spilled on the porch.

Will Arbery's play, Heroes of the Fourth Turning, is an emotional rollercoaster – shocking, real and insightful. It revolves around four young Catholic conservative friends, who meet years after graduation, to celebrate their beloved professor's appointment as president of the university. They are alumni of the fictional Transfiguration College of Wyoming. The party is held at Justin's house a week after the Charlottesville riots in 2017. The four friends, Justin (Jeb Kreager), Emily (Julia McDermott), Kevin (John Zdrojeski) and Teresa (Zoë Winters) discuss conservative ideas in all earnestness – from Trump and Bannon, to pro-life and transgender issues.

Heroes is being hailed for bringing ultraconservative ideas to the stage with nuance. The dramatic debate between the characters has found favor among some Catholics and the progressive New York audience has showered it with love.

Justin was a sharpshooter in the Marines and likes The Benedict Option, the much-discussed 2017 book by conservative Orthodox Christian Rod Dreher**. He displays a fear of the liberal world, lamenting that "we lost the popular vote by a lot. … In many ways, they are in power. And they are trying to wipe us out." During the course of the night, he reveals his plans to join the Benedictine order.

Kevin works at a Catholic publishing house. He's confused and filled with self-loathing – drifting between wanting a girlfriend and joining the priesthood. Teresa lives in Brooklyn. She snorts cocaine and is an ardent follower of Steve Bannon. Teresa wants a war against abortionists and believes that "Trump is a Golem molded from the clay of mass media, and he's come to save us all."

Emily, the most empathetic of all, is the daughter of their professor, Gina. She lives in Wyoming and her body is broken by an unnamed disease that leaves her in crippling pain. A devout Catholic, Emily worked at a pro-life women's organization and is chided for feeling empathy for "baby killers."

Their arguments fall on different sides of the conservative realm, but are held well within its boundaries.

"I think the play is more important than anyone in theater understands. Because at a point where our culture literally cannot understand what the other side believes, you have one of the most homogenous groups in the U.S. opening this door where fairly extreme views are able to be heard. Shocking!" said Alex, an acting student in New York. 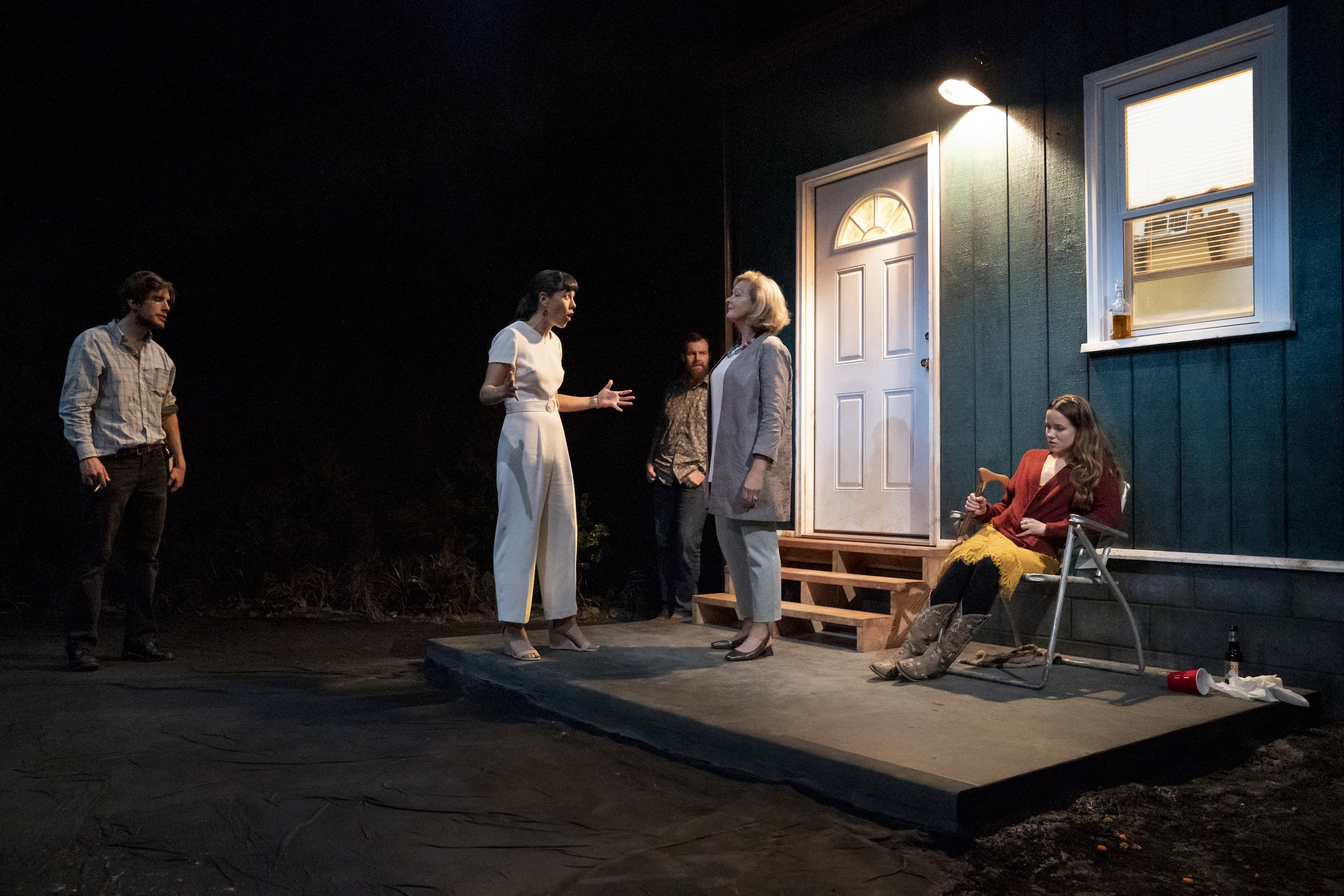 Laura Pittenger,* a playwright living in Queens, marveled at how the play managed to "shock" many in the audience. "People were gasping, you know, when somebody would say something that was sort of controversial or something that they just never expected that they would hear another human being say, especially not in New York," she said.

Watching the play has been an emotional experience for the audience. It has hit closer home for many Catholics, especially conservatives.

For Alex, the play was "emotionally devastating" and prompted a lot of "self-examination."

"I've never heard those ideas expressed by any actor, on stage or privately. Even doing this interview is scary because I know that as an actor there are repercussions, if you express anything which isn't in lockstep."

Arbery's play brings into focus the Trump voters who you've heard of but have never really gotten to know. They are conservatives who don't always agree with the president's divisive ideas. Like Kevin, who mentions he threw up next to his car after casting his vote for Trump, or Gina who admits she went to confession after casting her vote, "And I'm scared of confession." But vote they did, because "Liberty is being attacked, by both sides, and it's tragic to see."

"I think [the play] is a very apt representation of the current political atmosphere. I've heard these arguments play out in front of me so many times," says Ana Mendez, a high school teacher from Morristown, New Jersey.

"I have a brother entering the Benedictine monastery. And so, when that one character says he is entering the monastery, I just started crying because I have family members doing that. And he's not a repressed figure. He's not an ex-Marine. I think when your faith is lived from a place of hope and love, then it can be beautiful and life-giving and not the result of a fractured, damaged life" like those of the characters, said Alex.

For Pittenger and Mendez, it's the women who truly shine in the play. Fractured, broken, yet strong, they represent different sides of the traditionalist spectrum.

"Gina is refusing to recognize what the [GOP] party has become. She knows to an extent but she's still kind of stuck in the sort of the civility mindset — the John McCain era. Teresa is more like the people that are fighting each other right now, like they will not accept compromise. There is no getting along," explained Pittenger. 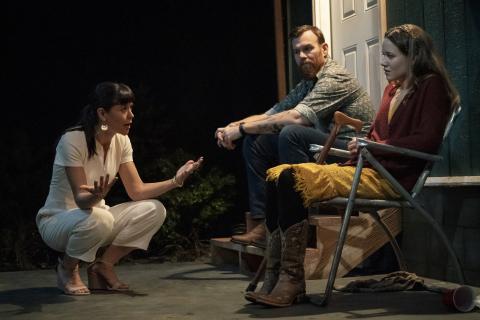 Gina and Teresa have a conversation on motherhood, where the older woman rebukes the younger for not wanting to have children. "Don’t invent a war just because you’re afraid to give your own body away to something higher," she tells Teresa. It brings to the fore the conversation around women's bodies

"It's almost as if for Gina, her eight children were sort of a trophy for her. Both women had this map set out for them, of what things should be, and there's a little bit of love lacking in themselves," said Mendez.

"I don't think [Teresa] wants to accept that culture. The conservative culture has a very specific idea of what women are supposed to be and do and think about. It brought home the unfortunate reality of the sacrifices women make to have families, but at the same time want to be intellectually engaged in the culture. We have to make sacrifices that men don't have to make," said Pittenger, who felt pity for Teresa because "for some people you're just a body."

The most relatable character for the women was Emily, who engaged most with the idea of suffering with others and not being judgmental. "She has a functional disability, but is an excellent listener. The others are good at hearing themselves talk. Overall, it was nice to sit in a theater where people were forced to listen to other views," said Pittenger.

For Alex, Kevin's sexless life hit closer home, as he found him "hilarious and tragic."

"I have at different times of my life been Kevin. Where I was living out the virtue of chastity in such a way where it's not based on fear. And it's not based on existential agony as a way of connecting with other people."

They all agree that Arbery's play is important. "There is a lot of truth to what Will [Arbery] is saying. I've seen a lot of those opinions. The conversation is needed," said Alex, who chose to go by a different name because he fears his pro-life beliefs would make him an outcast in the performing arts world.

"It's been extremely hard because I felt like the industry encourages everyone to be authentic, to hear your own voice. But I have never once felt like my voice was welcome in the room, because of my beliefs, because the fact that I'm pro-life. All those views are heresy. Will's play was overwhelming because it was the first time anything even remotely similar to my faith has been presented on stage. And while Will himself rejects those beliefs, it gives me hope that I might have a space here, or be able to create that space myself."

Pittenger feels that Heroes is part of a "larger ongoing conversation in theater," and between the left and right. It does not expect the audience to empathize with the characters, which becomes clear when Teresa declares, "Liberals are empathy addicts. … Empathy is empty."

"There are a lot of misinterpretations and simplifications of each other's positions," Pittenger added. "By refusing to simplify some of these conservative ideas that can so easily become a caricature, I think [Arbery] contributed something really valuable to the conversation."

*This story has been updated to correct the spelling of Pittenger's last name.

**This story has been updated to correct the church Rod Dreher attends.

A version of this story appeared in the Nov 29-Dec 12, 2019 print issue under the headline: Opening a conservative space on stage.