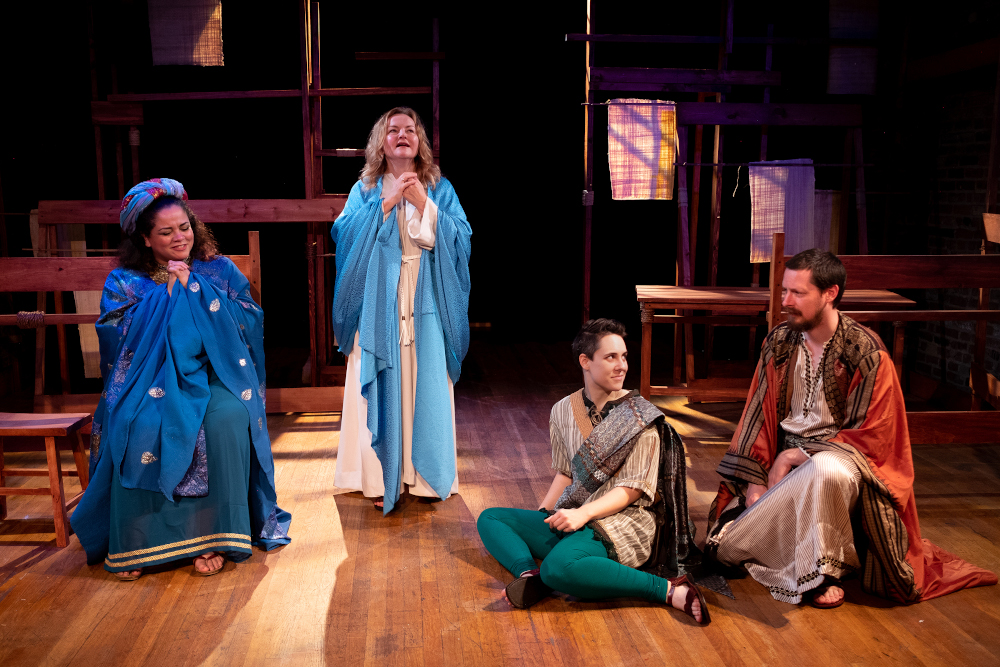 Charleigh E. Parker as Mary Magdalene, from left, Kristen Vaughan as Mary, Dani Martineck as Almelem and Nat Cassidy as Gestas in a 2018 production of "Almelem" at the Brick Theater in Brooklyn, New York. (Photo by Deborah Alexander)

A con man, a shrewd businesswoman, a would-be prophet and a true believer team up to save their country from the Roman Empire.

They gather thousands of believers and create a seamless campaign strategy.

Then Jesus shows up and ruins everything, leaving the main characters with no choice but to invent a new religion on the fly.

The resulting "biblical backstager" may sound like Monty Python's "Life of Brian," but in execution it more resembles New Testament fan fiction. Engaging, hopeful and occasionally profane, it gently reimagines the greatest story ever told.

Broken into five episodes, "Almelem" debuted in late November, with the final episode due out just before Christmas. It is based on a 2018 play of the same name by New York writer Sean Williams. Williams is also a co-founder of the company that produces the new podcast, Gideon Media, known mostly for its science fiction tales such as "Steal the Stars" and "Give Me Away."

Jordana Williams, Sean's wife, directs the show, which features their friend and playwright Mac Rogers as John the Baptist, referred to by a fictional childhood nickname, Ya-Ya.

Sean Williams got the idea for the play while attending an Easter service at Judson Memorial Church in New York, where his friend, the Rev. Micah Bucey, is an associate minister. At the service, Bucey told a story that had long circulated at the church about an old cross that had been taken down and repurposed into a Communion table.

Bucey told the congregation that the story, though a myth, was still true, making a parallel to the death of Jesus and the empty tomb inspiring early Christians to create a new community around the Communion table.

Inspired by the sermon, Williams, who grew up in a Latter-day Saints family, began to think about how Christianity began.

"Immediately, I got the idea of John the Baptist possibly being the messiah," he said. "Because it was a gig they were looking for someone to get."

Though he's not religious, Williams said he has always been intrigued by faith and by how the New Testament made its way from firsthand accounts to the stories we know today.

That led him to write the tale of a con man named Gestas and his apprentice Almelem, who teams up with power broker Mary Magdalene, on the search for a new messiah. At first, they are mostly driven by their hatred of the Romans or a desire for profits. Along the way, something changes. 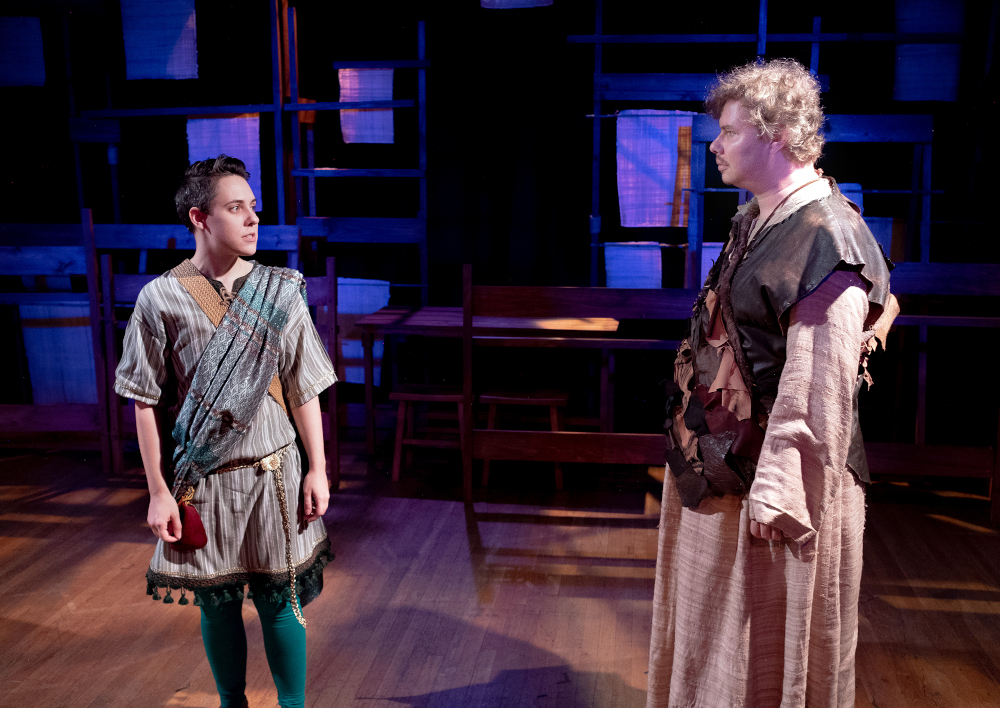 Dani Martineck as Almelem, left, and Mac Rogers as John the Baptist in a 2018 production of "Almelem" at the Brick Theater in Brooklyn, New York. (Photo by Deborah Alexander)

A turning point for John the Baptist comes when he encounters the main character, Almelem, a true believer who wants to be baptized.

Before that moment, John is a bit of a con man, said Jordana Williams. He's angry at the Romans and portrays himself as an angry prophet but doesn't really believe. In admitting he's making things up as he goes along, John has a bit of a revelation.

"You almost see him grow in that moment," the director said. "There's a greater holiness to that honesty and humility than there ever was to the slightly full-of-crap self-aggrandizement."

While the character of Jesus plays a central role in the plot, he never speaks and appears only once, when he meets John the Baptist. In that moment the Baptist turns from a stammering, would-be prophet to true believer.

A promotional piece of art for the stage version features the characters re-creating part of Michelangelo's Last Supper, with Jesus missing, along with the line, "You can't have a King without Kingmakers."

There's something universal about John the Baptist, said Rogers, a longtime friend and creative partner of the Williamses at Gideon. Rogers, who plays the Baptist, said he could relate to the character, a goofy but well-intentioned guy who dreamed of being somebody.

"John the Baptist wants so badly to be the man," he said. "And then the man shows up."

The character of Almelem, who is nonbinary, is played by Dani Martineck, who identifies as nonbinary in real life. Martineck's grandfather was an Episcopal minister, while their dad was raised Southern Baptist.

"I like to say sometimes that I was raised confused," Martineck said.

Playing Almelem helped Martineck, who now identifies as an atheist, to see faith as more focused on relationships among people than on doctrine. Their character Almelem witnesses the hope and the heartache inherent in the Gospel stories and decides not to give up.

"That feels like an emotional arc that a lot of people can connect with, in terms of something crashing and burning and being heartbroken," Martineck said. "And then what are you going to make of that?"

"When you are reaching for profundity, you are a little bit full of it. But when you treat people with like simple generosity, and love and kindness and honesty, that's magic."

Perhaps the loveliest — and one of the funniest — moments in the podcast comes when Mary, the mother of Jesus, recounts the story of the first Christmas. Gestas, the con man who is trying to figure out how to promote this new messiah, is not impressed: "You put the baby in the manger?" he asks, incredulous.

But Mary wins them over, in part because the retelling of the story is so human. She reflects the weariness of a pregnant woman trudging all the way to Bethlehem, wanting to lie down but unable to stop because her family has to finish their journey. She is then greeted with kindness after the birth of her son.

Jordana Williams said the audio drama balances "the profane parts of sacredness and the sacred parts of the mundane."

"When you are reaching for profundity, you are a little bit full of it," she said. "But when you treat people with like simple generosity, and love and kindness and honesty, that's magic."

The podcast, like the oldest ending of the New Testament Gospel of Mark, closes at the empty tomb.

That's fitting, said Bucey, because it reflects the situation of early Christians. Their leader had been executed by an empire and all their dreams were shattered.

So they told a story that changed the world, Bucey said. The story of the Christian faith, like the story of "Almelem," is queer, he added, in that it steps outside the status quo and imagines something better.

"They took this wooden cross — which was the symbol of execution — and said we are going to gather around this table and tell this story."