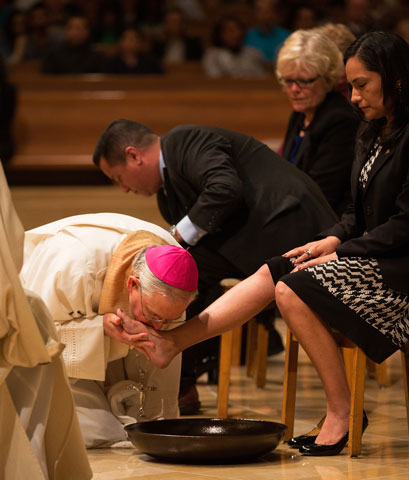 Los Angeles Archbishop José Gomez kisses the foot of a woman during Holy Thursday Mass in 2014 at the Cathedral of Our Lady of the Angels in Los Angeles. (CNS/Vida Nueva/Victor Aleman)

Following a request by Pope Francis, the Vatican has issued a decree specifying that the Holy Thursday foot-washing ritual be open to "all members of the people of God," including women and girls.

Although many dioceses around the world -- including Francis as pope and when he was archbishop of Buenos Aires, Argentina -- have long included women in the Holy Thursday ritual, the change in the official rules could introduce the practice into many other dioceses and parishes.

"After careful consideration, I have decided to make a change to the Roman Missal," Francis wrote in a December 2014 letter to Cardinal Robert Sarah, head of the Vatican liturgy office. "I therefore decree that the section according to which those persons chosen for the washing of the feet must be men or boys, so that from now on the Pastors of the Church may choose the participants in the rite from among all the members of the People of God."

Sarah's Congregation for Divine Worship and the Discipline of the Sacraments complied with the pope's request, issuing a decree Jan. 6, 2016. The decree and the pope's 2014 letter were made public Jan. 21. There was no explanation for the lag time.

In the United States, the announcement brought mixed reactions. Some say their parish has been washing women's feet for years. Brian Simmons, who coordinates the lector ministry at St. Jude Parish Community in Marina, Calif., in the Monterey diocese, said he doesn't remember a time when women were excluded from the ritual.

"It is simply a nonissue," he said. "We've been doing it so long. I just don't think anyone thinks the pope's decree was any big deal. If anything, it probably came as a surprise that not everyone else was also already doing it."

"Right now we have a prohibition [against including women in the Holy Thursday ritual] in the diocese. However, the Holy Father has changed the rubric, so that changes everything," he said. "The bishop hasn't said anything, but the rubric's been changed so we've basically been following the rubric, which is what we always do. I assume we are going to continue."

After the Vatican's announcement, Bishop Robert Morlino of Madison, Wis., who previously excluded women from Holy Thursday foot-washing, released a statement in which he gave priests in his diocese three options: include women in the washing of feet; follow the traditional practice of washing the feet of men; or omit the ritual altogether.

"It is my hope that in their outstanding care for the people entrusted to them, the priests will engage serious prayer and reflection in coming to their choice," Morlino said in the statement. "It is also my hope that our priests and people will avoid any pressure tactics so as to allow our priests to make good and prudential decisions.

"As I have always indicated, the central focus of the Holy Thursday liturgy should always be upon the Lord, His Priesthood, and the Eucharist. I hope, more and more, that this will be the case in each parish of the Diocese of Madison," Morlino said.

Basilian Fr. Douglas Mosey, president and rector of Holy Apostles College and Seminary in Cromwell, Conn., said he is telling seminarians, " 'You are entitled to your own view on this, but you are to humble yourself like Jesus did who is the High Priest.' So I hope they will all humble themselves in subordination to what is the policy of the diocese."

Mosey added, "It's taught to the seminarians by making sure they are in communion with your bishop and so if they have any questions they should ask the bishop. It's not a moral issue, it is just a practice, and some bishops obviously might agree and others don't agree."

Holy Apostles has 79 seminarians from dioceses in the U.S., France and Vietnam.

Mosey said foot-washing is a devotion that has flexibility and is not guided the same as a sacrament would be. "What Pope Francis is trying to express is that we need to wash the feet not only of men but of everybody because we're all foot washers," said Mosey.

Nicole LeBlanc, who has worshiped at Holy Trinity Parish in Dallas for 24 years, told NCR she doesn't remember a time when women were not included in the rite. She has "had the honor of being one of those," she said. "It was a really meaningful experience."

LeBlanc described her parish, founded 100 years ago by Vincentian priests and still staffed by the order, as being "on the leading edge of inclusive practices."

"The spirit of Vatican II is alive and well there," she said.

The Atlanta diocese opened the Holy Thursday ritual to women about 10 years ago, shortly after Wilton Gregory was installed as archbishop, according to Paula Gwynn Grant, archdiocesan director of communications.

Gregory, she said, has allowed each parish to handle the ritual as they like. The archbishop's practice is to wash the feet of six boys and six girls from the first Communion class at the Cathedral of Christ the King, Grant said.

"All the parishes continue to exercise the freedom to wash the feet of women. ... We'll continue our practice here and now it syncs up with what the Holy Father is saying."

When asked why the pope spoke about washing women's feet when it has been allowed in many places already, Grant said she believes "it lets us know that he needs to say something, because there are others struggling and needing instruction on that."

"If it doesn't apply to you, like in our case we already had the custom here of washing women's feet, it just lets me know that others needed the instruction and I'm always glad when we get instruction that we need," she told NCR.

Asked what he will be telling his seminarians about the changes, Msgr. Andrew Baker, president of Mount St. Mary's Seminary in Emmitsburg, Md., Baker said there were no specific plans but that "the Holy Father has changed a liturgical norm and we support him and the change."

What the pope wants, Baker said, is "to manifest the full meaning of the rite, which includes the meaning of charity and service," as is explained in the decree from the congregation.

He added that the change "fits in well with the Year of Mercy, insofar as the change helps us to remember that we are called to live merciful love to whomever is in need."

The change reflects Francis' own groundbreaking gesture when, just a month after his election in March 2013, he washed the feet of young people -- including women and Muslims -- at a youth detention center outside Rome. That act upset many traditionalists, who argued that the pope should follow church law.

They said that the rules required that only men should be chosen because the rite recreates Jesus' action at the Last Supper, when he washed the feet of his 12 male disciples.

A commentary reacting to the changes on the traditionalist blog Rorate Caeli predicted that "before long, like many other 'options' such as communion in the hand, female altar boys, 'extraordinary' ministers of holy communion and 'ad populum' celebrations, having women take part in the Maundy Thursday washing of the feet will become virtually obligatory, with the priests who refuse it being stigmatized as 'reactionaries' and punished in a variety of ways."

"One last point," the commentary continues, "the new rubrics for foot washing still limits it to the 'faithful,' members of the 'People of God.' ... Next Maundy Thursday, will the pope still wash the feet of an unbaptized woman or two?"

[This article includes reporting from Religion News Service. Elizabeth Elliott is an NCR Bertelsen intern. Her email address is eelliott@ncronline.org.]

A version of this story appeared in the Feb 12-25, 2016 print issue under the headline: Decree Oks washing women's feet in Holy Week ritual.