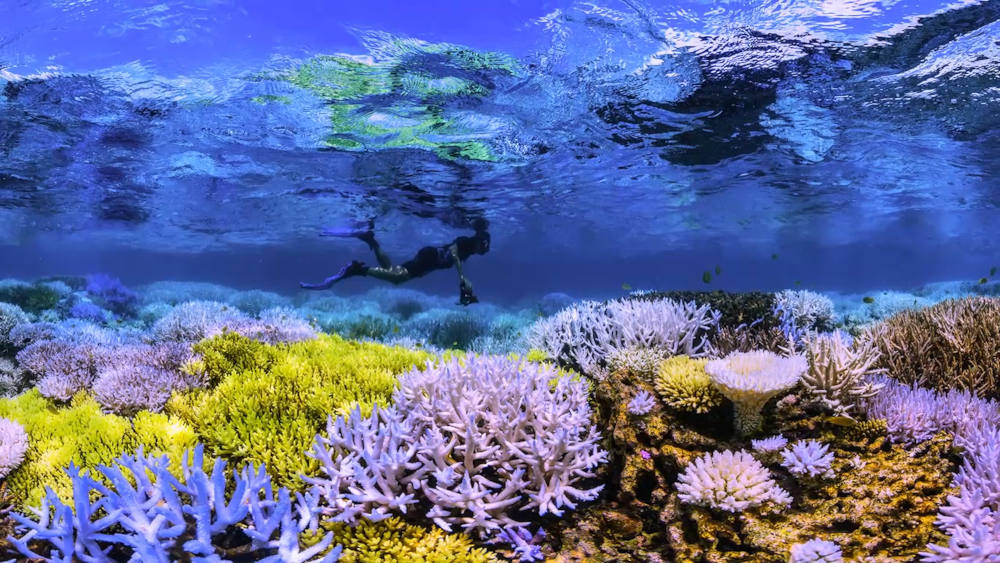 A scene from the 2017 documentary "Chasing Coral." (Netflix)

Let's face it: The coronavirus lockdowns across the country and around the globe leave a lot of free time.

According to AFP, the French wire service, upwards of one third of the world's population is under some type of movement restriction in an effort to contain the spread of COVID-19, the disease caused by the novel coronavirus.

Restaurants and museums are closed. Concerts are canceled. Baseball's opening day is delayed.

In between at-home workouts and virtual happy hours with friends, many of us have turned to our TVs to help fill the void. Even as a reporter, there's only so much news you can watch, and with sports limited to replays of classic games, streaming services are proving the much-needed leisure rabbit hole.

Luckily for EarthBeat readers, there's no shortage of environmental programming to check out and catch up on during this social interregnum. So if you've grown weary of binging "Love is Blind" and "Tiger King" or need a break from re-watching "The Office" for the fifth time, here's your eco-survey of the major streaming platforms.

[Before we begin, we're leaving out anything not included with subscriptions, so that includes popular documentaries like "Planet Earth," "An Inconvenient Truth", "Gasland," and "Chasing Ice" and films like "Promised Land," "Dark Water," "Avatar" and "Erin Brockavich."]

Let's start at Netflix, where the eight-part "Our Planet" series (2019) presents visually stunning looks at the earth's ecosystems and biodiversity, while addressing how climate change, water shortages and ocean dumping threaten habitats and their inhabitants. Plus, who can pass up narration by Sir David Attenborough?

Two specials from the PBS Nova series look at the science of climate change ("Decoding the Weather Machine," 2018) and the Flint water crisis ("Poisoned Water," 2017).

On the "Bill Nye Saves the World" series, the popular host has episodes exploring climate change and water shortages. (And for good measure, there's even one on how vaccines work.)

A few other Netflix docs:

On Amazon Prime, the prime environmental feature brings together two national treasures -- the national park system and documentarian Ken Burns -- with his 12-hour series "The National Parks – America's Best Idea" (2009). You can also check out Burns' 2012 series "The Dust Bowl" at a more digestible three episodes.

Amazon also hosts two major climate documentaries, the 2015 film "This Changes Everything" based on the Naomi Klein book of the same name, and the 2014 Emmy-winning, nine-episode series "Years of Living Dangerously." Along with that, it houses a number of PBS Frontline environmental investigations, including "Climate of Doubt" (2012), "War on the EPA" (2018), "Blackout in Puerto Rico" (2018), and "Inside Japan's Nuclear Meltdown" (2012).

Over at Disney Plus, you can find the full National Geographic catalog, including:

And for family movie night, what's better than a visit to a post-human Earth overrun with trash and one robot left to clean it all in Pixar's 2008 animated film "Wall-E."

At HBO, you can rewatch 2004's "The Day After Tomorrow" climate thriller. Its own collection of documentaries include the 2019 climate film "Ice of Fire" (narrated and produced by Leonardo Dicaprio); Spike Lee's 2006 "When the Levees Broke"  examination of post-Hurricane Katrina New Orleans; and "Mann v. Ford" (2011), a look back at a lawsuit brought by the Ramapo Mountain Indians against the Ford Motor Company over toxic waste dumping on their land. If you're looking for laughs, a running theme in the first season of "Veep" (fair warning: not for the kids, lots of language) is Vice President Selina Meyer's Clean Jobs Commission; the "Catherine" episode follows the fallout from an oil exec's appointment to the taskforce. Or why not revisit "Game of Thrones" but this time watch it as the allegory for climate change that it really is.

For some lighter options, Hulu has a number of eco-episodes from some favorite sitcoms. Among them, the "Greenzo" episode on "30 Rock" and the "Community" episode on "Environmental Science" where the Greendale gang celebrate "Green Week." Speaking of, Hulu has a documentary about Earth Day (appropriately titled "Earth Day"), and offers an animated version of the classic "Dr. Seuss' The Lorax" (tnot the 2012 feature-length film; to watch that, you'll likely have to rent or buy it).

So there you have it, a quick tour of the streaming world's environmental content. Missed one of your favorites? Drop us a message on Instagram or Facebook.

On April 3 Franciscan Sr. Ilia Delio will lead an online conversation on the moment presented by the coronavirus outbreak, one fraught with challenges but also filled with possibility for a new planetary faith. Know of other faith and climate events that have moved online in response to the coronavirus? Share them by posting to our Events Calendar..

On the theme of viewing options, we know that many of the national parks are closed up to prevent the temptation of group gatherings and limit the spread of the coronavirus. But that doesn't mean you still can't visit them.

A number of parks have set up virtual tours and webcams so their natural attractions can still be enjoyed from living rooms. That includes Old Faithful, proving that even amid a pandemic, the world's most famous geyser keeps on erupting.

A reminder of constancy in a time of uncertainty.