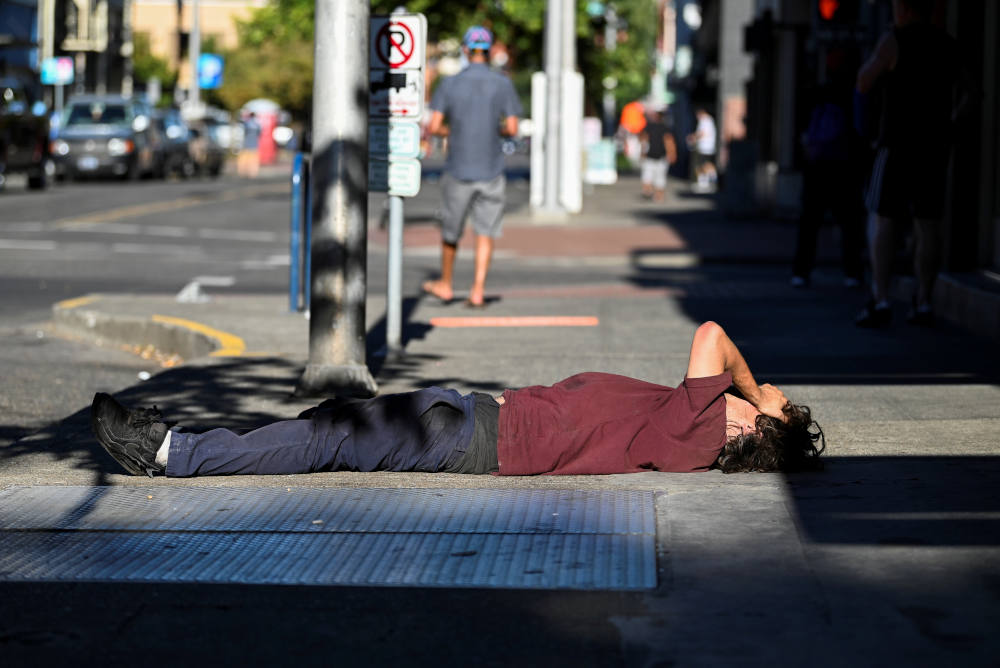 A man in Portland, Ore., lies on a sidewalk during a heatwave Aug. 11, 2021. (CNS photo/Mathieu Lewis-Rolland, Reuters)

It was by coincidence that I finally got around to watching "Don't Look Up," the apocalyptic Netflix blockbuster that has everyone talking, the night before NASA and NOAA released their latest annual data on the accelerating rise of global temperatures.

Each prestigious scientific agency issued reports Jan. 13 stating their findings that 2021 was the sixth warmest year on record, and the last eight years have been the hottest since record-keeping began in 1880. Data from European scientists determined 2021 as the fifth warmest year.

NOAA added that 2021 "marked the 45th consecutive year (since 1977) with global temperatures rising above the 20th-century average." NASA reported that the planet was roughly 1.1 degrees Celsius (1.9 degrees Fahrenheit) "warmer than the late 19th century average, the start of the industrial revolution."

Or as Washington Post climate reporter Sarah Kaplan put it: "The year 2021 was the seventh in a row in which global temperatures were more than 1 degrees Celsius above the preindustrial average. It's unlikely anyone alive will see the world's temperature drop below that 1-degree benchmark again."

For perspective, the world's nations have agreed to try to limit global warming to 1.5 C.

"The long-term trend is very, very clear. And it's because of us. And it's not going to go away until we stop increasing the amount of carbon dioxide in the atmosphere," Gavin Schmidt, director of NASA's climate modeling center, told the Associated Press.

The reports on global warming came the same day that Australia matched the highest temperature on record in the Southern Hemisphere.

When I watched the national evening news Thursday night, it was almost as if these reports were never released. I was pleasantly surprised to see Lester Holt with a brief story on "NBC Nightly News," but not so on "CBS Evening News" or "ABC World Report." (I avoid cable news, so can't speak to what aired there.)

Yes, there was certainly a lot of important news to cover yesterday:

Each of those stories received time on the three major news networks, and I certainly don't disagree with those editorial decisions. But each network also ran sizable segments (relatively speaking for a 22-minute broadcast) on Prince Andrew losing his royal titles amid his ongoing sexual assault scandal.

As I watched, I couldn't help but think back to the scene in "Don't Look Up" (no spoiler, I promise) where the media continually flocked reporters, resources and precious time and space to the various scandals involving a fictitious Supreme Court nominee, all at the expense of covering an Everest-sized comet barreling toward Earth that scientists universally confirmed would annihilate all life.

There's certainly a lot to unpack from "Don't Look Up," a parody film that billed itself as a not-so-subtle allegory of how the world, and especially government leaders and the media, has responded to repeated alarms raised by scientists about climate change — a threat to the planet that is no longer a forecast for the future, but one already present and worsening unless major advances are made to curtail the burning of fossil fuels, the primary driver of global warming.

The lack of coverage of the NASA/NOAA reports made me also wonder: Have we grown numb to the record-breaking heat our planet experiences on a now annual basis?

I don't have an answer to that. And as an environmental reporter, I know well the debates about how to report on climate change — more on solutions, for instance — in ways that will better engage and empower readers, listeners and viewers, rather than leave them curled up in a ball in the corner.

I don't have all those answers, either. But I do believe that amplifying coverage of climate change, period, is an important part of it, instead of cordoning it to Earth Day segments and international climate summits. While the media landscape has transformed dramatically the past two decades, core principles of when and where a news publication places a story, and how much space it gives it, still stand.

Back on the TV Thursday night, there were some positive signs. CBS Evening News ran a lengthy segment on rural Alabama communities that lacked septic systems, and connected it to funding earmarked in the infrastructure act to address such issues. It was an important environmental justice story that followed up on an investigation by "60 Minutes" in December.

But the coverage of the latest planetary warming report shows there's ample room for journalism to improve on climate change. In "Don't Look Up," as politicians and networks focused on scandals and short-term priorities, the comet continued toward Earth. And the NASA/NOAA reports show that in our real world, even as major news develops — be it critical legislative debates, tabloid scandals and even a pandemic — the planet continues to grow hotter and hotter.

It's up to us to decide if we'll look up to notice it, and then how we'll act.

What's new on EarthBeat this week:

What's happening in other climate news:

The Catholic Climate Covenant will debut its new "Ecospirituality Nights" virtual series on Jan. 31 with a presentation by Christina Leaño, associate director of Laudato Si' Movement. The live event will run from 7:30-8:30, Eastern, and will feature English-Spanish interpretation.

Near the end of 2021, Stefan Hostetter invited me to speak with Green Majority Radio, on CIUT 89.5 out of Toronto, about EarthBeat's "Estate Plan for the Earth" special reporting project. It was a good conversation about all things land preservation, conservation easements, Laudato Si' and even the pope's potential visit to Canada.

The interview was broadcast last Friday (Jan. 7), and you can give it a listen here. As an added incentive, the episode also features a discussion on "Don't Look Up."

As always, please forward this email, or pass along the link to EarthBeat Weekly on our website, to a friend who might appreciate EarthBeat.