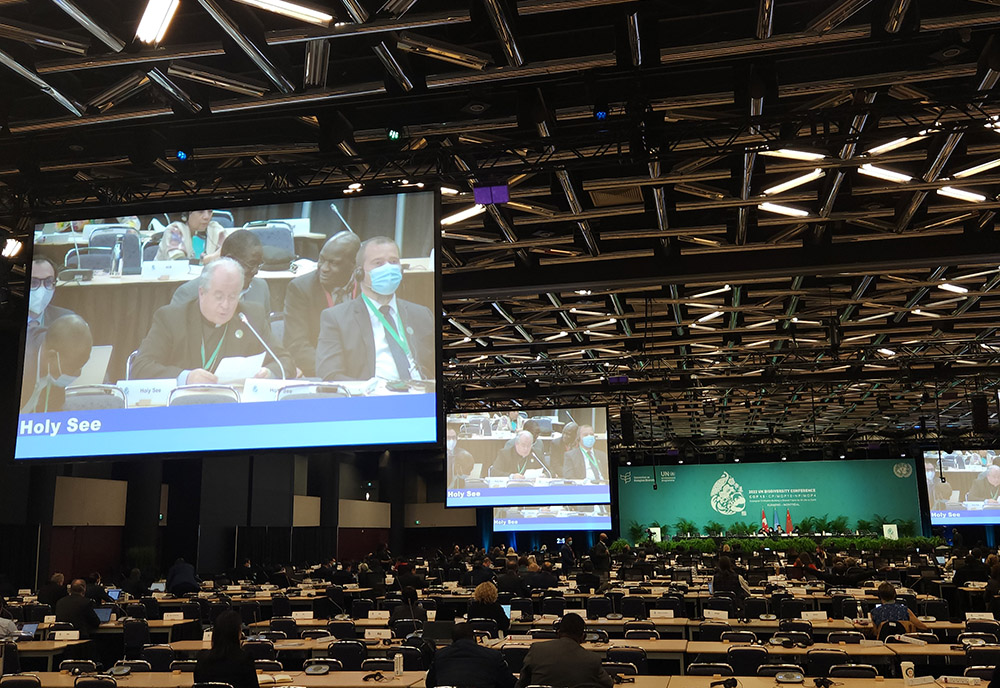 As the United Nations biodiversity summit enters its critical final days, a representative of the Holy See urged nations to seize the opportunity to adopt a meaningful, action-focused framework to halt and reverse the destruction of nature, warning that the world faces a "critical juncture" as species loss and ecosystem destruction accelerate at unprecedented rates.

Archbishop Ivan Jurkovic, apostolic nuncio to Canada, said in a Dec. 15 speech at COP15 that the global deal under negotiation here in Montreal must address the drivers of biodiversity loss, like deforestation, pollution and exploitation of land and waters, and put forward solutions based on global solidarity. He added that any conservation efforts will fall short if they do not uphold the rights of Indigenous peoples.

"While increasing to 30% protected areas is a step in the right direction, this is not enough if this is detrimental to Indigenous peoples," he said, referring to the "30x30" proposal that calls for setting aside 30% of land and oceans for conservation by 2030.

Indigenous communities have raised fears in the lead-up to and throughout the 13-day international nature conference that conservation initiatives that do not include them in decision-making risk forcing people from their traditional lands.

"Their relationship with land and resources is a fundamental expression of their identity. Indigenous peoples' rights, including free, prior and informed consent, must be appropriately protected," Jurkovic said.

The Vatican diplomat delivered his remarks on the opening day of the high-level segment of COP15, where environmental ministers from nearly 140 countries assembled to hammer out the final decisions for the post-2020 Global Biodiversity Framework that will chart conservation targets — more than 20 in its current draft — for the coming decades to put nature on a path to restoration.

COP15 has been called a potential "Paris moment" for nature that could galvanize nations to redouble focus on conservation, as the Paris Agreement has amplified attention to limiting climate change. Approximately 1 million species of plants and animals face extinction by the end of the century, and some critical ecosystems, like the Amazon rainforest and polar icecaps, are nearing dangerous and irreversible tipping points.

Jurkovic said the destruction of nature is not simply an environmental issue. "It also represents a developmental, economic, security, social and moral issue," he said.

"Care for the environment, our common home, is in fact a universal duty that must be carried out bearing in mind the principle of common but differentiated responsibilities" among countries, he said.

Jurkovic's speech was among four dozen delivered by ministers Dec. 15. Officials spoke about their countries' efforts to protect nature and advocated their priorities for the biodiversity framework. Speaking shortly after Russian President Vladimir Putin's representative on climate issues, the environmental minister of Ukraine, Ruslan Strilets, described how the war has not only cost human lives but has destroyed the environment, as well. Hours later, news outlets reported that Russia had launched at least 60 missiles on Kyiv and other Ukrainian cities in one of the largest rocket attacks of the war so far. 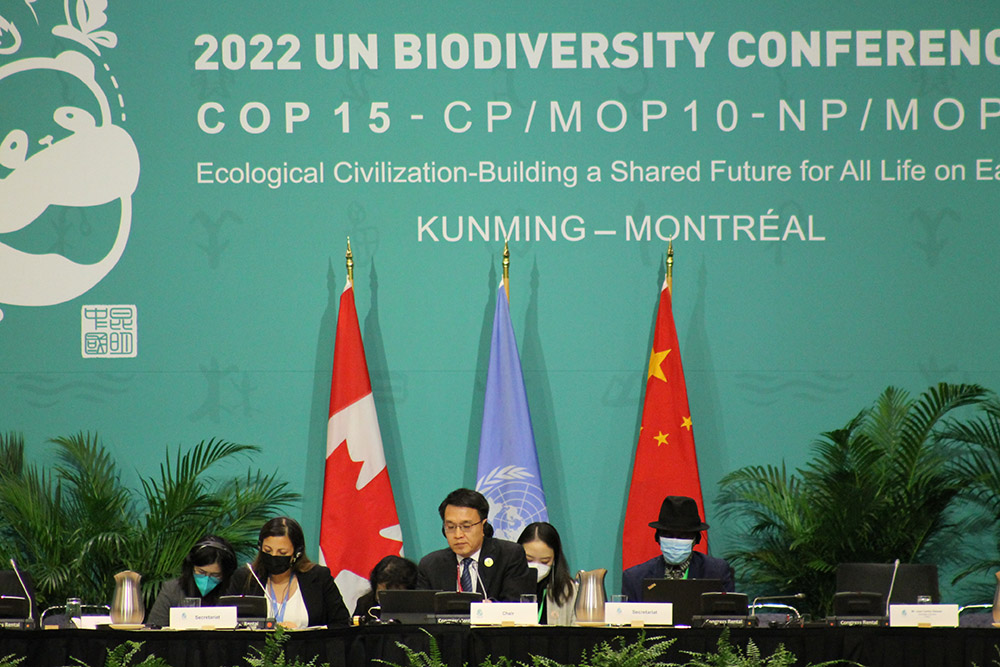 The ministers arrived as talks reached a crossroads.

A day earlier, on Dec. 14, delegates for developing countries representing the vast majority of the world's biodiversity walked out of negotiations on mobilizing resources, including financing for the targets at the center of discussions.

As with the climate COPs, funding has proven a major sticking point. Developing nations have argued that since the majority of the world's biodiversity is located in their boundaries, they bear a higher share of the costs of conservation. They have called for a biodiversity-specific fund, as much as $700 billion, while developed countries have pushed to use existing mechanisms. On Thursday, a dozen countries, including the European Union and United States, announced a 10-point financing plan for biodiversity from public and private sources.

"Negotiations are still very difficult because no agreement on finance has been reached yet nor on the 30x30 [proposal]," Alexandra Goossens-Ishii, policy lead for the Faiths at COP15 coalition, told EarthBeat. She said there have been strong calls from civil society groups for countries to demonstrate much more ambition and reach consensus. 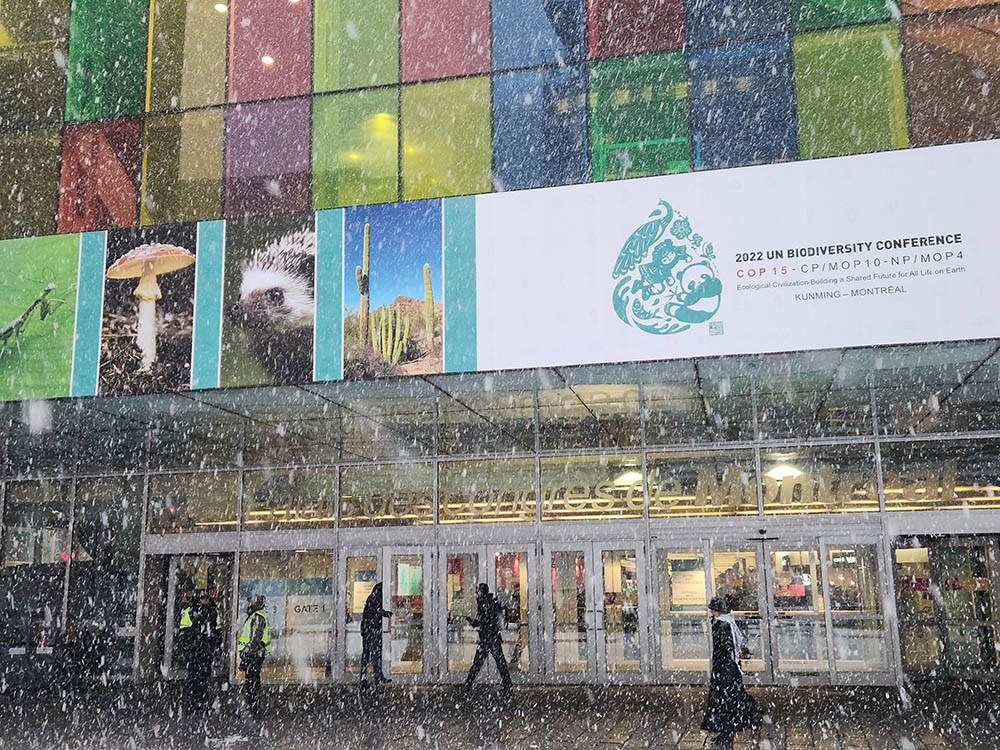 Snow falls in downtown Montreal on Dec. 16, day nine of the United Nations biodiversity conference. Up to 8 inches were expected to fall over the weekend as nations rush to wrap up negotiations on a global deal for nature. (NCR photo/Brian Roewe)

"On one hand, countries are failing to step up to provide the urgently needed finance to support the efforts for conservation of biodiversity globally," he said. "And on the other hand, we are also witnessing how some negotiators are continuing to dilute the ambition of the draft of the global biodiversity framework."

In his speech, Jurkovic urged nations to engage all parts of government and society to address drivers of biodiversity loss — listing deforestation, changes in land use, overexploitation, pollution, and plastic and electronic waste — and repeated frequent calls from Catholic leaders led by Pope Francis for an ecological conversion to bring about lasting change to preserve creation for current and future generations.

"Our common endeavor has to be grounded in the respect of inherent human dignity and directed at the promotion of integral human development. Such an effort cannot be accomplished without restoring a harmonious relation with the natural," he said.

Crunch time at COP15 comes as a winter blizzard has prepared to cover Montreal in a blanket of snow. Between 6 to 8 inches of snow are expected to fall through the weekend. The secretariat for the U.N. Convention on Biological Diversity, which is facilitating the conference, has offered its own forecast, pledging that negotiations will conclude on time by Dec. 19, COP15's final scheduled day.

This story appears in the COP15 Montreal feature series. View the full series. 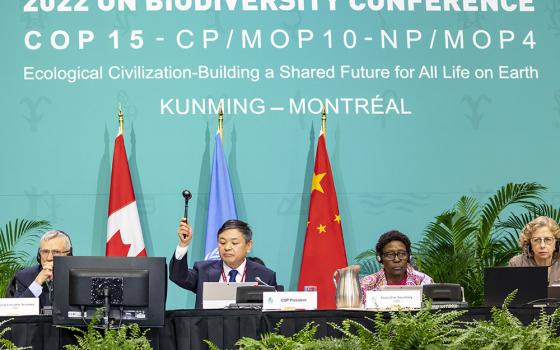 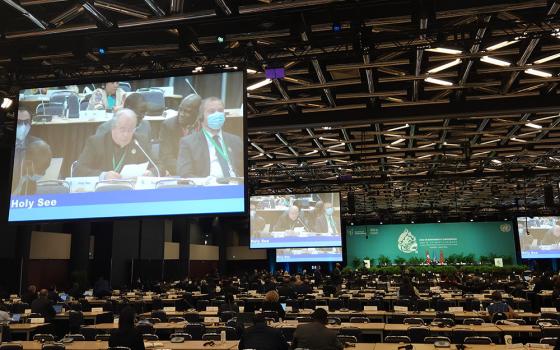 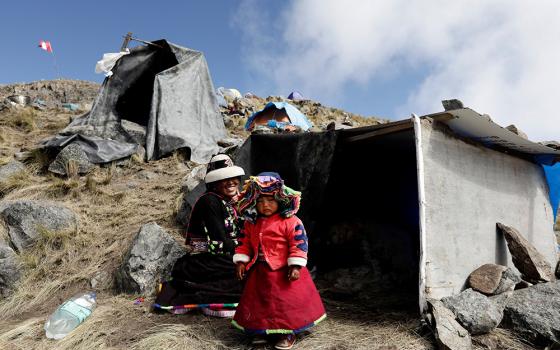