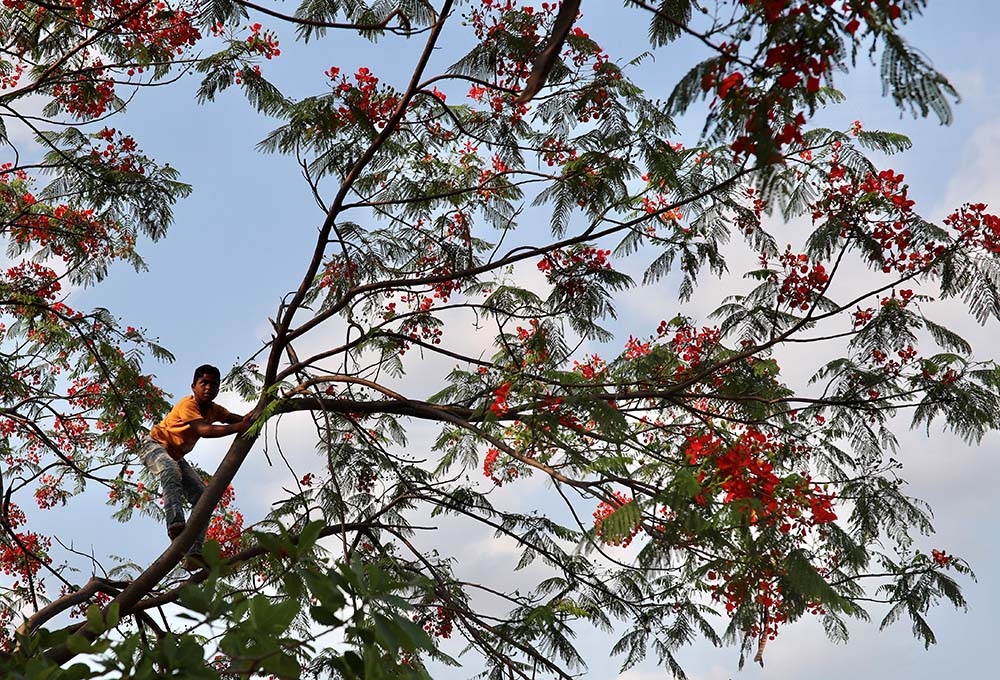 Titu Gain, who lives in Satkhira, in southern Bangladesh, knows firsthand how deadly and dangerous a cyclone can be.

"Almost every year, cyclones damage my house," said the 55-year-old Catholic father of three. "I lost my brother during a cyclone in 2007," a year when storms killed more than 3,000 people.

Like almost all of his neighbors, Gain is a farmer who also works as a day laborer to make ends meet. The region is known for producing prawns and mangoes, but its location on the coast makes it especially vulnerable to storms.

Families like Gain's live in tin-roofed houses made of wood, bamboo and straw, which are unable to withstand the strong winds.

"We are poor — we cannot [afford to] build our homes from brick. When a strong cyclone damaged our flimsy house, we lived in inhumane conditions under the open sky," he said.

When disaster strikes, people who lose their homes, as Gain and his family did, receive assistance from the government and local aid agencies. But it's a never-ending battle, as cyclones occur every year.

The impact of those disasters is compounded by COVID-19. While 20% of the population lived in poverty before the pandemic, that figure had increased to 42% by the end of 2020, according to a household survey by the South Asian Network on Economic Modeling.

Crisscrossed by rivers that flow into the Bay of Bengal, low-lying Bangladesh is one of the countries most vulnerable to the increasingly fierce storms and rising sea levels that scientists predict will worsen because of global warming. 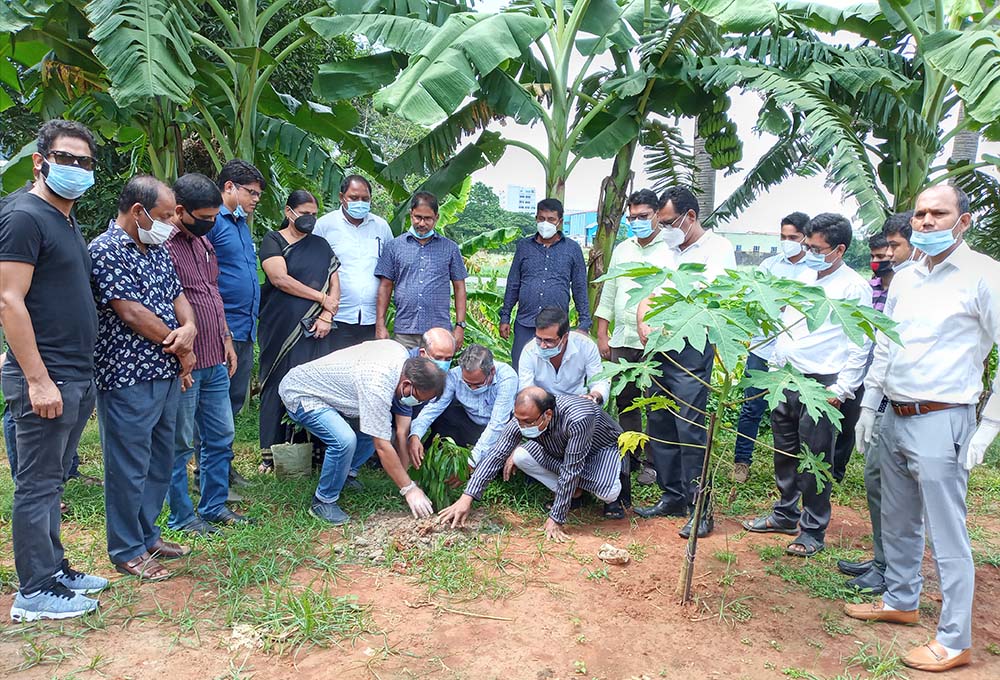 Forests provide a natural buffer against severe weather, but deforestation — spurred by illegal logging, unregulated settlement and clearing of land for industrial agriculture — has decreased this protection. More than half a million people have died because of cyclones since 1970.

Now the Catholic Church is trying to change that, with a goal of planting 700,000 trees to celebrate the fifth anniversary of Pope Francis' 2015 encyclical "Laudato Si', on Care for our Common Home."

The effort, launched in August, also marks the 50th anniversary of the creation of Bangladesh — a Muslim-majority country of 165 million people, which has only about 400,000 Catholics.

Each Catholic is asked to plant at least one tree, Bishop Gervas Rozario of Rajshahi, who is vice president of the Catholic Bishops' Conference of Bangladesh, told EarthBeat, with special emphasis on coastal areas, where storm risk is great, and along rivers, where erosion jeopardizes villages.

Rozario is also president of Caritas Bangladesh, which has joined the effort with a pledge to plant 300,000 trees in the areas where it works. 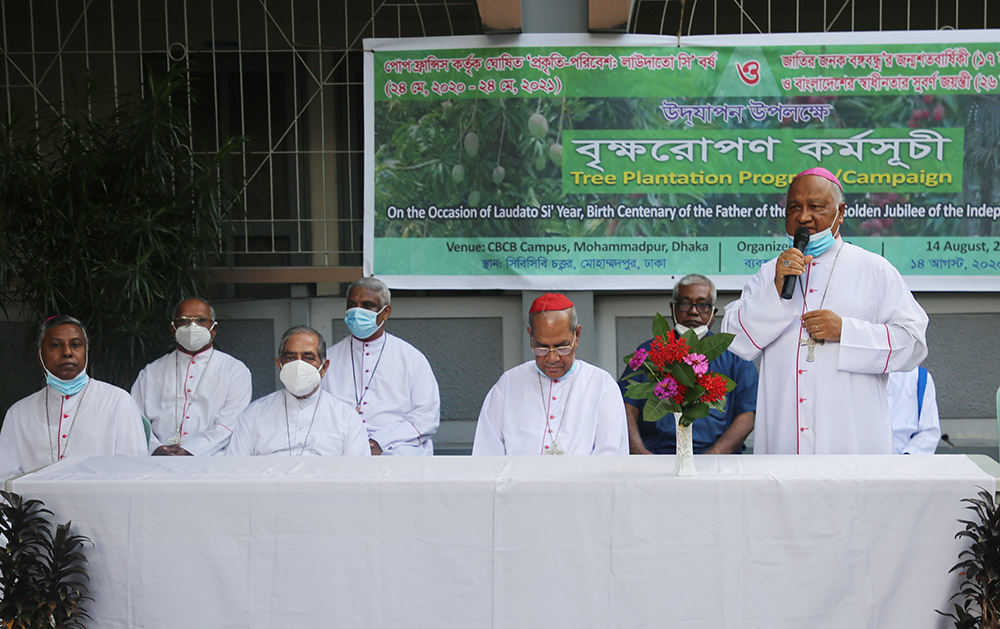 Bishop Gervas Rozario speaks about the tree planting program at the premises of the Catholic Bishops' Conference of Bangladesh in Dhaka Aug. 14, 2020. (Sumon Corraya)

Gain is enthusiastic about the effort. He got one young tree from his parish and planted 10 more mango saplings on his own. He said he also inspired his Muslim neighbors to plant trees.

"With the encyclical Laudato Si', Pope Francis inspired us to take care of our environment," Rozario said. "We Catholic bishops discussed how we can contribute to the environment, and we saw that we could plant trees to care for the Earth. Trees can protect us from natural disasters."

The tree planting also marks the country's golden jubilee, as Bangladesh celebrated its independence on March 26.

Besides helping to mitigate climate change, trees offer crucial protection in Bangladesh, where floods, cyclones, drought and river erosion claim lives every year. The South Asian country is located in the floodplain of the world's largest delta, where the Ganges and Brahmaputra river systems empty into the Bay of Bengal.

That location makes the country particularly vulnerable to weather-related disasters, including cyclones, flooding and storm surges, as well as the erosion and landslides that accompany heavy rains.

On Easter Sunday, April 4, at least a dozen people died, including some who were crushed under trees and a house in Gaibandha and Faridpur, as a fierce "nor'wester" storm with gale-force winds battered northern, central and western Bangladesh.

In regions where most houses are made of mud bricks, the storms destroyed thousands of houses and trees, along with large swaths of crops.

Scientists predict that climate change will cause increasingly severe storms. They also warn that by 2050, some 300 million coastal residents worldwide could live below the elevation of average annual flooding.

The stakes are particularly high for low-lying countries like Bangladesh, where it is feared that about 20 million people could be displaced, according to the Intergovernmental Panel on Climate Change.

Four out of every 10 people in Bangladesh live in areas that are fewer than 10 meters above sea level, according to a recent study. That study modeled likely migration due to sea level rise and predicted that the districts of Shariatpur, Munshiganj and Narayanganj, just south of the capital of Dhaka, would be most affected.

While past studies have predicted strong migration from rural areas to cities, the authors of the new study say the effect is more likely to be a cascade, with flooding forcing people to move first to neighboring districts. That could cause residents of those areas to migrate in turn, or it might trigger conflicts over local resources.

The authors project that 1.3 million people across Bangladesh could be affected over the next three decades.

Added to the threat of sea-level rise is damage from severe storms. In 1970, cyclones are estimated to have killed 500,000 people. Death tolls have been lower since then, but are still high. 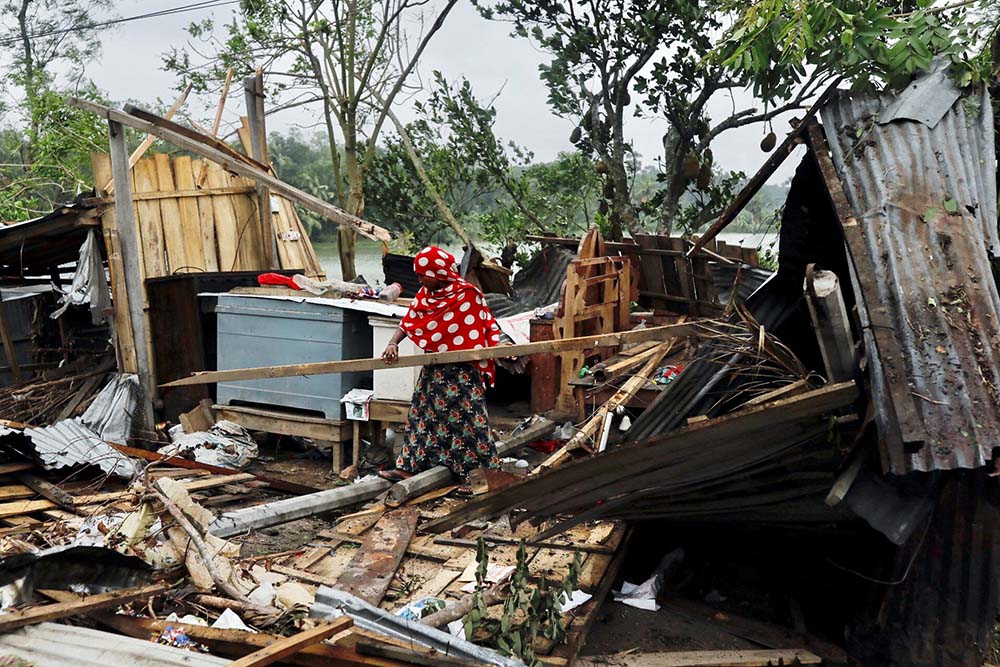 A woman moves debris at the site of her house, demolished by Cyclone Amphan, in Satkhira, Bangladesh, May 21, 2020. (CNS/Reuters/Km Asad)

To help save lives, the government and aid agencies, including Caritas Bangladesh, have equipped some buildings, including churches and schools, to serve as temporary cyclone shelters.

In Bangladesh, where 165 million people live in an area smaller than the state of Illinois, only 16.85% of the land is forested. That means there are just 263 square yards of forest per person — the lowest per-capita amount in the world, according to the U.N. Food and Agriculture Organization. And the country loses more than 3% of its forests each year.

The situation is further complicated by migration from neighboring Myanmar. Over the past few decades, Rohingya refugees forcibly displaced from Myanmar have settled in southern Bangladesh. The largest influx followed a crackdown by the Myanmar army on Rohingya Muslims in 2017.

Since then, an estimated 745,000 refugees have fled to the district of Cox's Bazar in Bangladesh, where forest has been destroyed to make way for multiple refugee camps. More than 620,000 people live in a single settlement, which is currently the world's largest refugee camp.

In 2020, Bishop Ponen Paul Kubi of Mymensingh, south of Dhaka, visited areas in his diocese where people had lost their homes when erosion caused riverbanks to collapse and asked Caritas to help the victims. A program in Mymensingh has provided financial aid and helped repair riverbanks, but it is not enough to solve the problem in the district, where at least five villages are at risk of severe riverbank erosion. 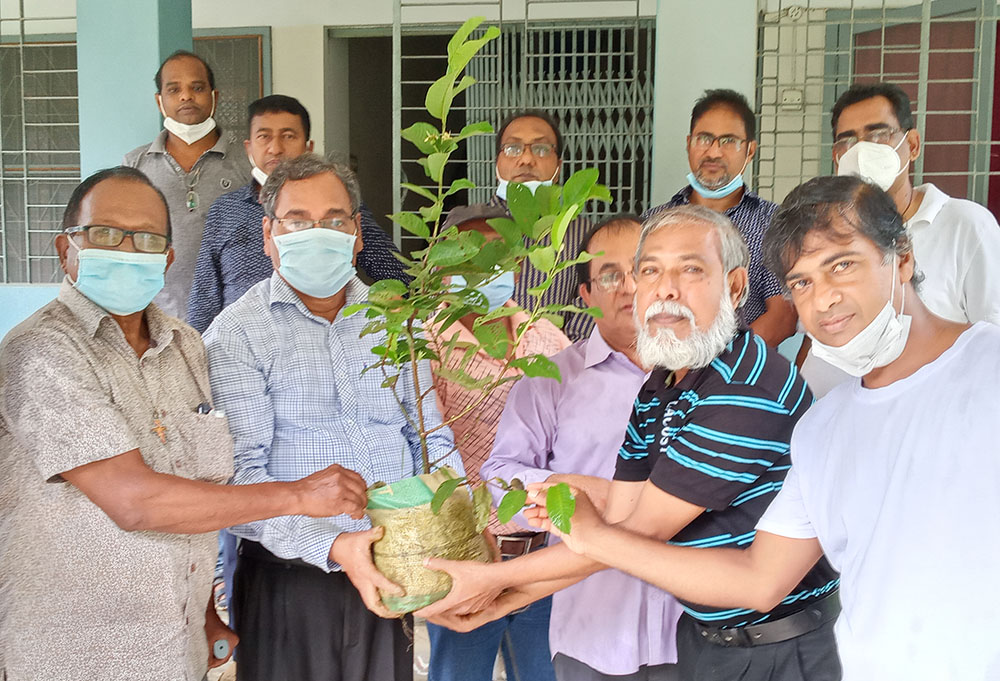 Mree, who is Catholic and has participated in the church's tree-planting campaign, worries about what would happen to her if the river took her house. Without any land where she could rebuild, she fears that she would become a climate refugee.

"I saw that people are planting trees in remote areas," Ratna, who is Catholic, told EarthBeat. "This kind of program should continue. Other church and [nongovernmental organizations] should do the same, to save nature."

Ratna sees increasing forest cover as the best way to protect both people and the environment.

"Trees save thousands of lives," he said. "To save lives, there is no better alternative than planting trees."