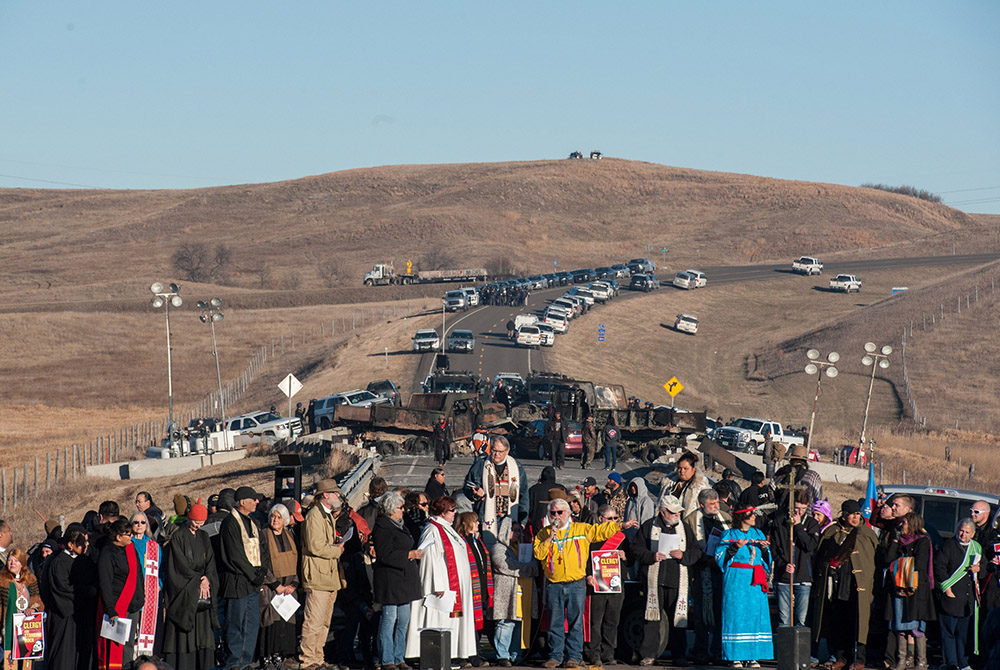 Clergy of many faiths from across the United States participate in a prayer circle Nov. 3, 2016, in front of a bridge in Standing Rock, North Dakota, where demonstrators confront police during a protest of the Dakota Access pipeline. (CNS/Reuters/Stephanie Keith)

Jessica Reznicek, a 39-year-old environmental activist and Catholic Worker from Des Moines, Iowa, was sentenced in federal court June 30 to eight years in prison for her efforts to sabotage construction of the Dakota Access pipeline.

Over the next several months, the women used oxyacetylene torches, tires and gasoline-soaked rags to burn equipment and damage pipeline valves along the line from Iowa to South Dakota. Their actions reportedly caused several million dollars' worth of damage and delayed construction for weeks.

Indicted on nine federal charges in September 2019, the two pled guilty to conspiracy to damage an energy facility. The government dropped all other charges, which included malicious use of fire.

In addition to the eight-year prison sentence, U.S. District Court Judge Rebecca Goodgame Ebinger ordered Reznicek to serve three years of supervised probation upon her release and pay nearly $3.2 million in restitution to Energy Transfer LP, which owns the pipeline.

A news release from the U.S. Department of Justice quoted Acting U.S. Attorney Richard D. Westphal of the Southern District of Iowa as saying, "This was a federal crime of terrorism. Criminal acts conducted on multiple instances, at multiple locations, over a sustained period of time, resulting in over $3 million in ordered restitution. After which Reznicek sought to encourage others to engage in similar conduct."

Reznicek has said that her drastic protest was born of concern, even desperation, over the threat the pipeline, known as DAPL, posed to Iowa's waterways.

The 1,172-mile pipeline, which transports crude oil from the Bakken Fields in North Dakota through South Dakota and Iowa to a port in Illinois, has been the source of a years-long and deeply contentious conflict between the pipeline company and Indigenous tribes, climate activists and farmers who oppose continued reliance on fossil fuels and worry that pipeline leaks could contaminate soil and water.

Opponents of DAPL have waged legal battles, established encampments, held marches and prayer ceremonies, chained themselves to construction equipment, and at times used sabotage in an effort to thwart the pipeline's development.

An Energy Transfer website calls DAPL "one of the safest, most technologically advanced pipelines in the world" and says pipelines are safer than transporting oil by road or rail.

In a July 1 interview with ABC affiliate WOI-TV in De Moines, Reznicek said the harm was not theoretical, noting that DAPL and the Energy Transfer Crude Oil pipeline, which make up the Bakken pipeline system, leaked at least eight times in 2017.

"We are witnessing these industries destroying life around us, and for what? For what?" she said.

In the interview, Reznicek, who grew up in Iowa's Dallas County, said that as a child she used to go to the Raccoon River for "peace, for solace, for healing." Over the years, she observed the water quality diminish. The Raccoon now ranks as one of the country's most endangered rivers, according to American Rivers, a river conservation organization based in Washington, D.C.

Des Moines water department officials recently announced that toxicity levels in the Raccoon, one of the city's two sources of drinking water, are "high and rising," Reznicek told EarthBeat after her sentencing. "They anticipate the algae levels will increase over the summer, making the river unsafe, so they are proceeding to dig wells to tap into the aquifer. It is a catastrophe."

She added, "I understand the impact of fossil fuels on climate change, but my motivation has primarily been to protect the water. We have so many water-quality issues in Des Moines and rural Iowa that concern for the water was a motivating factor for me."

The acts of sabotage followed months of more conventional opposition tactics. She and Montoya had attended public hearings, participated in rallies and hunger strikes, and locked themselves to construction equipment. They were arrested several times.

But the women were never apprehended during their clandestine strikes against the pipeline itself. In July 2017, they held a press conference to publicly describe what they had done.

"Some may view these actions as violent," Montoya said at the time, "but be not mistaken. We acted from our hearts and never threatened human life nor personal property. What we did do was fight a private corporation that has run rampantly across our country, seizing land and polluting our nation's water supply. You may not agree with our tactics, but you can clearly see the necessity of them in light of the broken federal government and the corporations they continue to protect."

Montoya is scheduled to be sentenced July 30.

At Reznicek's June 30 sentencing, prosecutor Jason Griess described the women's conduct as "incredibly dangerous," saying they put first responders at risk when they used blowtorches to cut into pipelines without knowing if there was oil in the line.

While the judge lauded Reznicek's work of feeding the poor, she said a harsher sentence on grounds of domestic terrorism was warranted because Reznicek not only sought to stop the flow of oil, but also to prevent government approval of projects like DAPL in the future.

Reznicek says she plans to appeal her sentence and is optimistic the domestic terrorism designation will be overruled. In the TV interview, she said she did not consider her actions to have been violent.