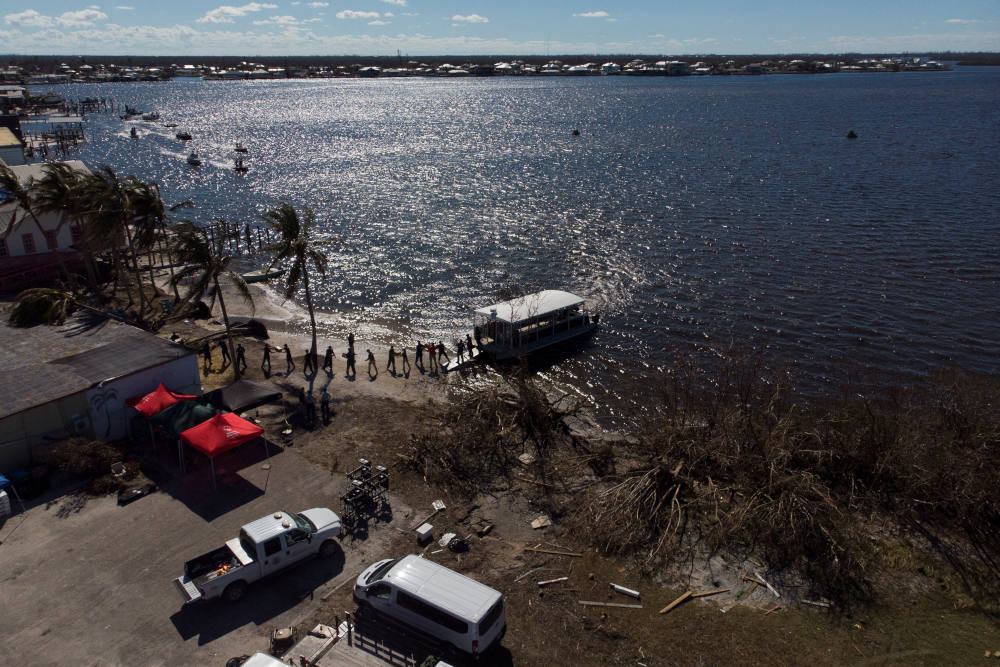 The U.S. Coast Guard in Matlacha, Fla., loads water and other supplies on a boat to be delivered to Pine Island Oct. 2, 2022, after Hurricane Ian caused widespread destruction. (CNS photo/Marco Bello, Reuters)

The world heard about Hurricane Ian's devastation along coastal southwest Florida, but the Catholic Charities network of agencies also will focus on lesser known but equally stricken communities and devastated farmworker enclaves in the region.

"As we continue to do these assessments in all these pockets of low-lying areas that are 6 to 8 feet under water — in places like Bonita Springs, Arcadia and Wauchula — that is where Catholic Charities will help: in these pockets you are not hearing anything about," said Peter Routsis-Arroyo.

He served as CEO of Catholic Charities of the Diocese of Venice before moving to Miami. He also still owns a home in the greater Fort Myers region, which is in that diocese.

Hurricane Ian plowed into southwest Florida on the afternoon of Sept. 28 as a strong Category 4 storm. The top gust recorded by a National Weather Service station was 155 mph at Punta Gorda airport north of Fort Myers.

Although Tampa and Sarasota were expected to suffer the greatest impact from Ian, the storm came ashore further south and dealt its most powerful blow near Port Charlotte, north of Fort Myers.

Winds and storm surge wreaked havoc on coastal island communities such as Sanibel and Pine Island and all the way south to Naples, all within the Diocese of Venice.

Flooding and coastal surge also were reported in the Lower Florida Keys in the Archdiocese of Miami, and most every diocese in the state to a lesser extent experienced some flooding and tornadoes, according to Routsis-Arroyo.

By late Oct. 3, the Florida death toll had reached at least 100. It was expected to climb higher as door-to-door rescue operations continued, including in coastal islands such as Sanibel that are now only accessible by boat or helicopter.

With its statewide network of hurricane and disaster response experience, Catholic Charities is positioned to help Ian's survivors who find themselves desperate at this time, including migrant farmer communities further inland, where search and rescue operations were still underway.

"Even if you have a few feet of water in your house and everything on the floor is damaged and you are dealing without water or electricity, you are traumatized," Routsis-Arroyo told the Florida Catholic, Miami's archdiocesan newspaper.

He noted that the Florida governor's Volunteer Florida office has committed $1 million in funding to Hurricane Ian relief, with $75,000 going to local Catholic Charities agencies. Financial assistance drives following Ian also have been set up around the region.

He also joined conversations aimed at helping Catholic Charities and civic authorities, including the National Guard, establish distribution stations in what will become a patchwork of 17 sites for food and supplies throughout southwest Florida.

Those will include some Catholic parishes, Catholic Charities locations and community centers, he said.

It remained unclear how or when some 10,000 permanent residents of Pine Island, and more on Sanibel Island, will be able to access their homes after bridges linking the islands were destroyed by Ian.

"We ask for people to be as generous as they can be and for a lot of prayers; there will be a lot of pain over the next month and a lot of suffering," Routsis-Arroyo said.

"There are so many pockets of low-lying residential areas and trailer parks that have been destroyed or inundated with 8 to 10 feet of water; and then you have the whole Peace River flooding problem in the town of Arcadia, and the Myakka River in the town of North Port, which is why you have the National Guard there."

The Tallahassee-based Florida Catholic Conference's disaster response office, along with the Knights of Columbus and myriad other individual parish and charitable efforts, will help fill needs in concert with the Diocese of Venice's recovery plans, he added.

Transportation efforts were hampered over the Oct. 1-2 weekend by flooded highways. Prepositioned emergency supplies had been staged further north since Hurricane Ian made landfall further south than expected.

"When it's a disaster of this magnitude, everybody is doing something," Routsis-Arroyo said, adding that he estimates he has personally been involved in some 15 major hurricane or disaster response efforts in over 30 years with Catholic Charities, including 2004's Hurricane Charley and 2017's Hurricane Irma, both impacting southwest Florida.

Thankfully, Routsis-Arroyo said, the home he still owns in the Diocese of Venice suffered only minor damages.

The church in downtown Fort Myers was not so lucky, he added. St. Francis Xavier Church suffered extensive roofing and water damage, and it is believed that Catholic churches on Sanibel and Pine Island suffered catastrophic damages.

Meanwhile, all the local airports remain closed and large swaths of communities from Naples to Port Charlotte and beyond remain without power and water.

Most of the material aid is expected to come in through the Tampa-St. Petersburg, Orlando and Miami areas for the short term.

Catholic Charities USA is likely to begin planning a response that will include logistical support, distribution sites, case management and on-site sanitation and laundry services made possible through mobile units that have been deployed following similar floods and tropical storms around the country.