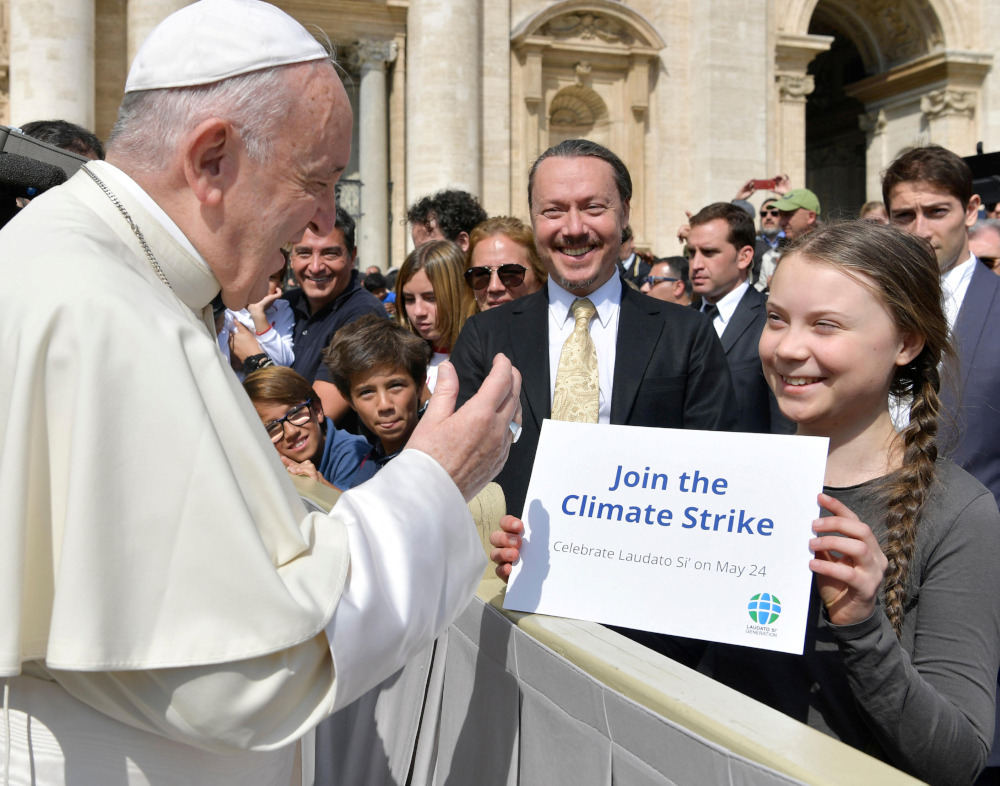 Welcome to Burning Questions, the EarthBeat feature that takes on those questions smoldering in your mind about climate change and religion — from the basics to more complex, and everything in between. Have a Burning Question of your own? Let us know

Climate activists, like the rest of us, are stuck inside. But they're not giving up on the fight for climate action. Not even close. They're just moving it, as my colleague Brian Roewe reported, from the streets to the screen.

Heading into the year, activists anticipated 2020 being a monumental moment for the climate movement. First, we have the 50th Earth Day this month, followed by the 5th anniversary of "Laudato Si'" in May. In the United States, as you undoubtedly know, it's an election year. And, to top it off, there's a pivotal UN climate summit scheduled in Glasgow in November – perhaps the most important climate conference since the Paris Agreement was signed in 2016.

In the face of all that, and the challenges COVID-19 and social distancing present, activists are figuring out creative ways to keep the movement alive and build off its successes from 2019.

While plans are still up in the air, and are sure to continue changing, here's an overview of what activists are doing now if you're looking to get involved.

Fridays for Future is the movement of youth climate strikes started by Greta Thunberg in 2018 when she began protesting outside the Swedish parliament. The movement is known for its climate strikes where students walk on out of school on Fridays to protest government inaction.

With schools closed down, Fridays for Future is inviting strikers to #ClimateStrikeOnline by posting selfies with a picket sign.

Greta and Fridays for Future also launched a series of weekly live webinars with presentations from scientists and journalists. In a tweet launching  #TalksForFuture on March 27, the account wrote, "The best way to make a change is to be informed." Tune in for updates here.

350.org is an international environmental organization founded in 2008 with the initial goal of building a global climate movement. Through digital campaigns, public demonstrations and grassroots organizing, 350.org wants to take power away from fossil fuel companies and give it to the people, primarily communities that will be most affected by climate change.

350.org has penned an open letter to national governments and the international community titled "Principles for a #JustRecovery from COVID-19."

"As decision-makers take steps to ensure immediate relief and long-term recovery, it is imperative that they consider the interrelated crises of wealth inequality, racism, and ecological decline – notably the climate crisis, which were in place long before COVID-19, and now risk being intensified," the letter states.

A number of prominent organizations in the climate movement have signed onto the letter, including the Sunrise Movement and the Global Catholic Climate Movement. Other Catholic organizations supporting the letter include the Jesuit Centre for Faith and Justice as well as the  Catholic Divestment Network.

The letter outlines five principles the organization believes must be upheld in national response efforts:

In line with its mission to build "an army of young people to make climate change an urgent priority across America," Sunrise Movement is using this time to educate future leaders through its new initiative Sunrise School.

Earth Day Network grew out of the first Earth Day in 1970, and its mission is "to build the world's largest environmental movement to drive transformative change for people and planet."

To get involved with Earth Day, you have a couple options.

First, you can check out this page for ideas on how to take action for the earth on a daily basis. Today's action asks people to download an app and help Earth Day collect important environmental data in your area. For more actions, click here.

Another option is to volunteer with the Earth Day event. If you're interested in helping out with Earth Day's 50th anniversary event, click here.

Interfaith Power & Light is a religious campaign to mobilize people of faith to take bold action on climate change.

Before the coronavirus pandemic broke out, Interfaith Power & Light had been planning a Faith Climate Action Week for April 17-26, inviting faith communities to host events and activities in celebration around Earth Day.

If you'd like to plan a digital event for your community that week, or if you need to adjust your existing plans, Interfaith Power & Light is offering free kits to help you plan virtual events. Click here for more information.

Team Sierra is in the process of planning a series of virtual activities inspired by nature for people to participate in at home for the entirety of Earth Month (April).

From an email sent out to members April 1, here's a description for its first activity:

The Franciscan Action Network is a social justice advocacy organization representing Franciscan communities in the U.S.

This week, the Trump administration rolled back auto-emissions regulations from the Obama era. Franciscan Action Network is asking people to send letters to their members of Congress to urge the Environmental Protection Agency to stop dismantling environmental protections.

The Network already has set up a form with a pre-written email, with the option to edit, where people can put their name and address and the email sends automatically.

"These standards exist for the benefit of public health and cutting them puts us all in danger," the letter states.

The Global Catholic Climate Movement was founded in 2015 to help turn Pope Francis' encyclical, Laudato Si', into action for climate justice. The Movement is a coalition of more than 400 Catholic organizations from all around the world, which include religious orders, youth groups, diocesan offices, NGOs and more.

As people are forced to stay inside their homes, Global Catholic Climate Movement has published on its website a list of Catholic activities people can do during the coronavirus pandemic. The list ranges from personal prayers individuals can do alone, to an online training people can participate in to become a Laudato Si' Animator.

GreenFaith is an interfaith organization aimed at inspiring, educating, organizing and mobilizing people for environmental action.

GreenFaith is hosting daily video conference meetings at 4 pm Eastern Time to bring together people of faith. Titled, "Faith Community Call for Care and Resilience," calls are led by religious leaders from different traditions each day and are streamed on their Facebook Page (click here) and on Zoom (click here).

GreenFaith is also inviting people to sign this values statement. "As people of faith and spirit, we believe that the measurement of a healthy society is how we treat those who are the most vulnerable," the statement writes in part.

This story appears in the Burning Questions feature series. View the full series.
A version of this story appeared in the May 15-28, 2020 print issue under the headline: How can I get involved in virtual climate activism?.