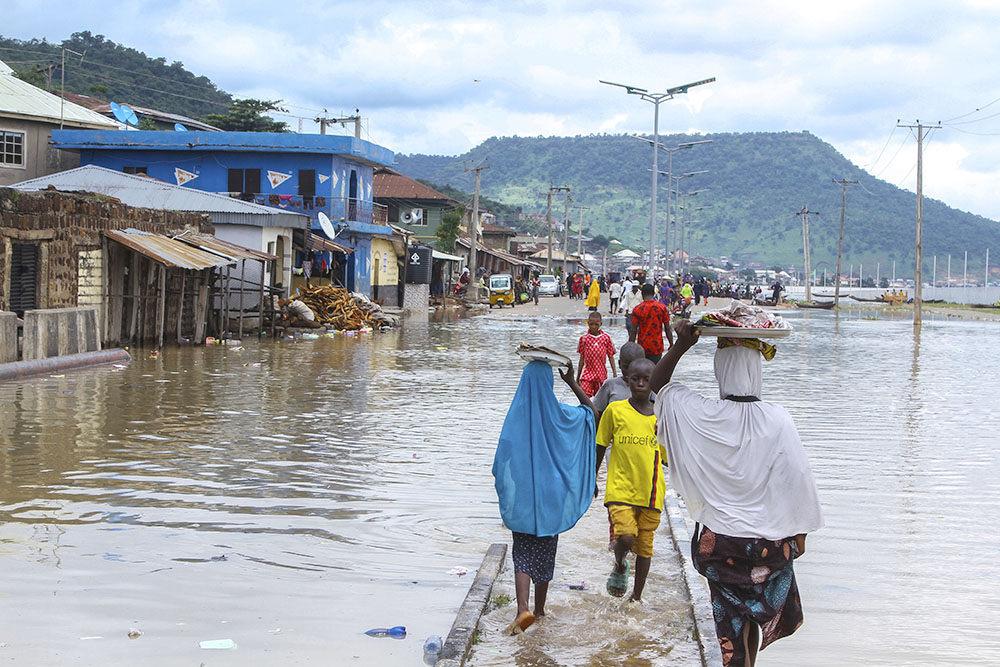 People walk through floodwaters following several days of downpours in Kogi, Nigeria, Oct. 6. Officials in Nigeria have called the floods the country's worst in more than a decade, blaming the disaster on heavy rainfall and the release of excess water from the Lagdo Dam in neighboring Cameroon. (AP/Fatai Campbell)

One early morning in September, a flood surge gushed into Endurance Kiki's home in Kpakiama in southern Nigeria. More than a foot of filthy water bubbled into her apartment, forcing her, her husband and five children to relocate to a temporary site for shelter.

Since the flood eviction, Kiki and her family have been living in a makeshift home a few kilometers away from her submerged apartment. She says no Nigerian government officials have visited them, and "we feel that we have been abandoned since the floods evicted us from our home."

"My children and I have been taking shelter in the open [sky] here ... and we still struggle to take care of ourselves," she told NCR. "It feels like we have no government."

Kpakiama, located just a few miles inland from the Gulf of Guinea near the convergence of the Forcados and Niger Rivers, is one of several Nigerian communities that have been submerged this year. The community's traditional ruler, Chief Ambakederemo Bunu, told NCR that the flood left his people stranded in makeshift temporary shelters.

Although the federal government of Nigeria has said that it approved national emergency flood preparedness and response plans to mitigate and reduce the impact of floods, with relief materials reaching at least 315,000 displaced persons across the country, Bunu says none in his community has benefited from it.

"The entire community is underwater and my people are in dire need of serious interventions with relief materials like food, clothing, sanitary materials and shelter. But unfortunately, it seems as though the government doesn't care about us," he said.

In the absence of government intervention, the Nigerian Catholic community, through the Justice Development and Peace Commission of the Bomadi Diocese in Delta state, is partnering with Catholic Relief Services, a humanitarian agency of the U.S. bishops, with distribution of food and non-food items.

Fr. Zachariah Fufeyin, the commission's director and one of CRS's partners at the Bomadi Diocese, says the partnership started back in 2012 when 30 out of Nigeria's 36 states were submerged by devastating flooding.

"We started partnering with CRS in 2012 during the national flood disaster that killed and displaced many of the Nigerian citizens, and wrecked havocs worth millions of naira," Fufeyin told NCR. "The Niger Delta have always been in serious trouble with incessant flooding, and CRS has been very supportive in this regard."

"Anytime we have issues of emergency or any humanitarian need, we appeal to CRS and get their support in form of funding, and we as the foot soldiers go into the affected communities for implementation," he said.

CRS does not work directly with communities, but partners with nonprofit organizations to provide humanitarian assistance to people in need. Anselm Nwoke, the organization's partnership and capacity-strengthening coordinator in Nigeria, says CRS's guiding principle includes providing immediate relief to people in need.

"For us at CRS, we try to work with our partners, in this case, some of our church partners that are in these places that have been affected by flood," Anselm told NCR. "Back in 2020, the incident in Bomadi for example was so grave that we worked with Diocese of Bomadi to provide support to about 200 households affected."

"We have about 57 dioceses with numerous parishes here in Nigeria, and when things like this happen, it's the people at the community level that are mostly affected," he said.

Nigeria is currently experiencing severe flooding that has destroyed homes and farmlands, especially in communities along the floodplains of the two major rivers: Niger and Benue.

So far, more than 600 people have died with more than 1.4 million people displaced. Thousands have been displaced or injured, and more than 100,000 hectares (about 250,000 acres) of farms have been submerged by water. 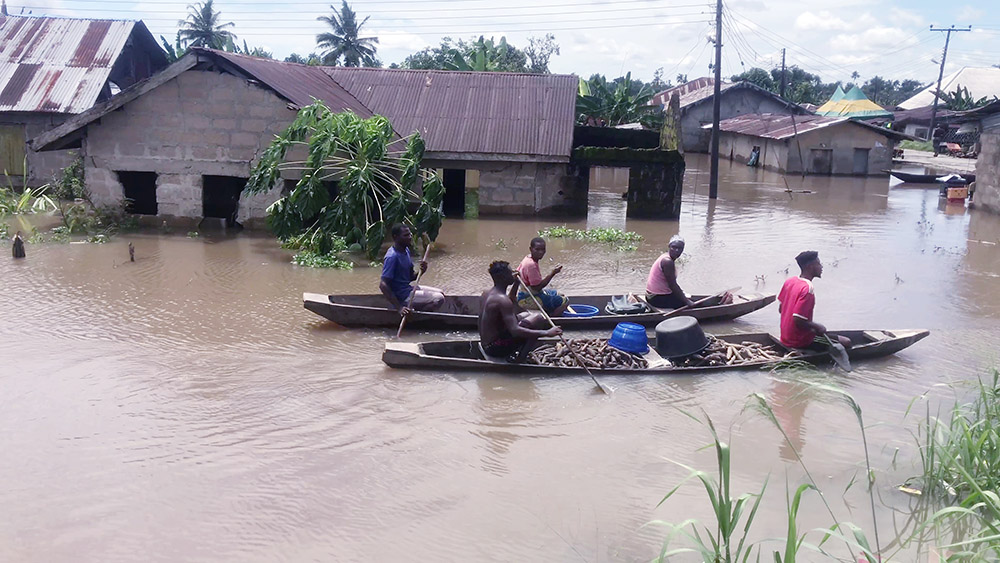 In September this year, Nigeria's National Emergency Management Agency and the Nigeria Hydrological Services Agency informed Nigerians that the operators of the Ladgo Dam, located in neighboring Cameroon, would be releasing excess water on Sept. 13.

Earlier in August, the Nigerian Meteorological Agency sounded alarms that there would be flash floods in about 19 states between August and October this year, and warned states to intensify adaptation, mitigation and response mechanisms to curb the impending danger.

Still, residents in communities along the floodplains of the two major rivers were not evacuated. In Anambra, for instance, 76 people fleeing the dangerously high floodwaters on a boat died in a boat accident.

Experts say this is the worst flood disaster in Nigerian history. Nwoke, the CRS coordinator, said the flooding has affected a range of river communities, including those in the upland areas.

While Nigerians blame the federal government for failure in honoring a 1980 agreement with Cameroonian authorities to build a shock-absorber dam — the "Dasin Hausa Dam" that would contain water released from the Cameroonian dam every 10 years and prevent it from causing floods — the federal government blames state governments for disregarding weather advisories issued by its various agencies to avert disasters.

Nwoke thinks blaming each other won't solve the recurrent flooding disaster, "I don't think it's a question of blaming, we have observed that this flooding incident is a recurrent issue, just like we have in 2012 where one of its causes was attributed to the release of water from the Lagdo Dam," he said.

"We've also seen that apart from issues like that, this year we have witnessed a whole lot more rainfall than we've had in the previous years ... and we can't continue to give the same excuses every year," he said.