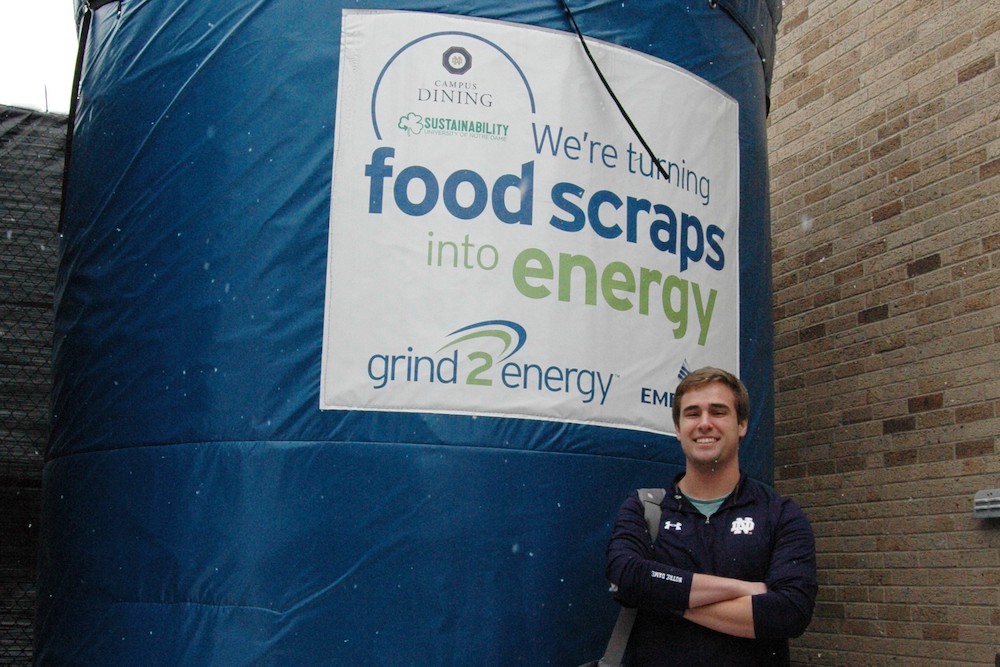 Editor's note: Speaking of food waste, EarthBeat is collaborating with the Ignatian Solidarity Network on Lenten Daily Food Reflections. You can sign up here.

On the campus of the University Notre Dame with its "Fighting Irish" mascot, green is undeniably the school color during football season. But in recent years, the 177-year-old university with about 12,000 students has been going green in other ways — reducing its carbon footprint and working towards sustainability.

In 2016, the university adopted a comprehensive sustainability strategy that featured six major areas the university intended to work on. One of them was a commitment to reduce waste, including food waste. At Notre Dame, food waste comes primarily from its two main dining halls and from campus catering events. Food waste was painfully visible on home football game weekends. Thousands of fans came to campus to cheer, eat, drink — and discard what they didn't consume.

"One of the first things I realized when I started working at the university was that we were generating an awful lot of waste on campus, and most of it was food," recalled Allison Mihalich, senior program director at Notre Dame's Office of Sustainability.

Until two years ago, Mihalich worked for the Environmental Protection Agency in Washington, D.C. She's found campus culture very different than the EPA environment. Not everyone on campus is well informed about or even interested in environmental issues. But she saw that Notre Dame administrators had a growing commitment to sustainability and wanted to both recycle and rescue food.

Mihalich said she first encountered Matthew Magiera, a chemical engineering major from Pittsford, New York, in the university's sustainability office conference room. His research notes and calculations were spread out across the table and floor. Collaborating with Campus Dining and the Office of Sustainability, Magiera had been tasked as an intern with calculating the amount of food waste from dining hall food trays and from catering.

It was quite a challenge for a sophomore college student, even an exceptionally committed and capable one. For months, "waste weighs" of food were painstakingly recorded, analyzed and re-analyzed.

Two years later, Magiera shies away from taking much credit for his critical food waste research. Nonetheless, the research soon led to Notre Dame's installation of three Grind2Energy systems, one near each of the two dining halls and one by the catering office.

Last year, Notre Dame began utilizing the Grind2Energy systems in order to process its food waste and then send it to another site for anaerobic digestion, the biological break-down of organic material that produces biogas that can be used to generate electric power. 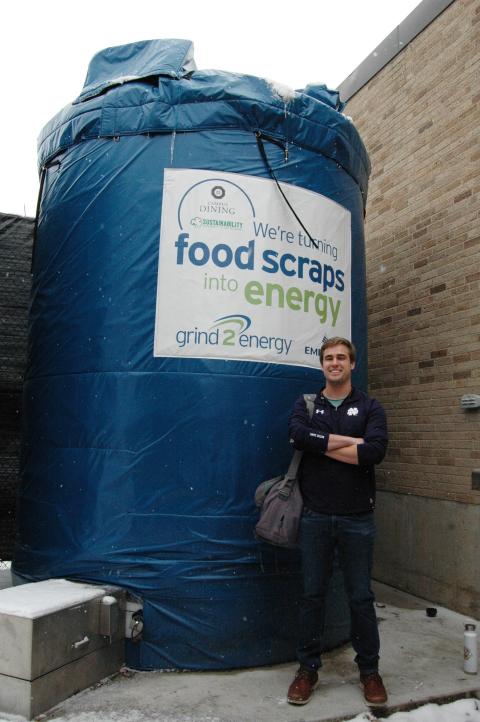 Is Notre Dame the first university to adopt this new approach to food waste disposal?

"We're one of the first," Magiera said. "Ohio State and Michigan State have their own digesters as well. So it's not something that's unique to Notre Dame. It would be cool if we had developed this novel technology, but the fact that we didn't means that it's even more implementable."

The climate crisis is attracting growing attention on campuses across the country, with students at seven Catholic schools among 57 colleges and universities taking part in a Fossil Fuel Divestment Day last week. Georgetown and Creighton Universities recently announced plans to divest at least some of their endowments from fossil fuel companies.

Notre Dame's president, Fr. John Jenkins, has convened two meetings of fossil fuel executives at the Vatican and plans another later this year, probably at Notre Dame, all aimed at persuading the executives to reduce their companies' carbon emissions. Notre Dame students have also pushed for divestment, but Jenkins said he favors such steps as a carbon tax over what he characterizes as the mostly "symbolic" value of divestment.

The three Grind2Energy systems in use at Notre Dame are essentially industrial-sized garbage disposals capable of grinding up all types of food except for some hard-shelled mussels. The ground-up food is piped outside into 5,000-gallon holding tanks. Once or twice a week, the tank contents, known as slurry, are piped into a septic truck and transported to a large dairy farm 30 minutes from campus, in Plymouth, Indiana.

On the farm, Notre Dame's slurry is combined with other food wastes and cow manure. The smelly stew soon generates methane gas inside massive tanks. The methane is captured and used by a local power company to generate electricity for 1,000 homes a day in Plymouth.

Leftover food from student trays. Giant garbage disposals. Holding tanks and anaerobic digesters. And then, electricity for 1,000 homes! The initiative at Notre Dame is expected to help reduce the university's overall waste by 10 percent a year. That includes campus waste generated from product packaging, yard clippings, furniture, clothing and appliances as well as food waste. Not included is waste from construction projects on campus, but Mihalich said the university tries to recycle -- or otherwise divert from the landfill -- 95 percent of that.*

Like Mihalich, Magiera is pleased that Notre Dame is moving in new directions towards sustainability. After graduation this spring, he will work for Anheuser-Busch, which boasts a long, corporate commitment to the sustainable production of beer and has one of the largest anaerobic digesters in the world. But this young man's concern for the environment and interest in sustainability apparently has family roots. 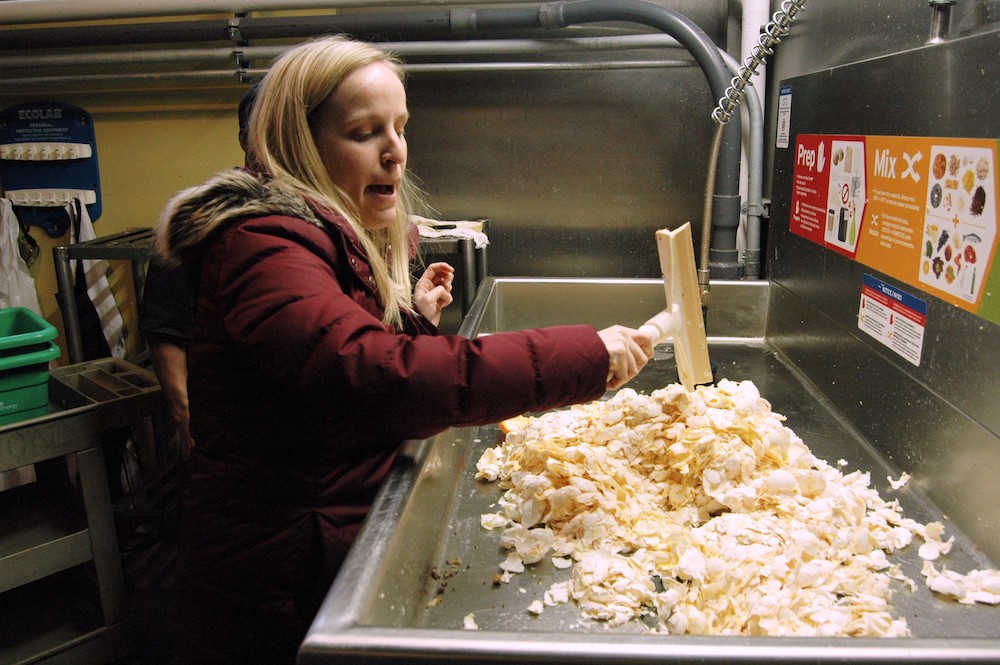 "My great-grandfather Stanley on my mom's side was actually a bit of a proto-environmentalist in upstate New York," he explained. "In his boyhood years, he was a fisherman and later noticed that the Buffalo and Niagara rivers were being polluted by dumping. The Bethlehem Steel Corporation was one of the biggest sources of that pollution."

Magiera said Stanley became an outspoken critic of those who were polluting rivers. It took courage. According to family lore, he was once thrown down a flight of stairs because he spoke up against Bethlehem Steel.

Magiera's great-grandfather's example has inspired him. He's sure of that. "And I got my middle name — Stanley — from him."

In the spirit of his great-grandfather, Magiera speaks up about the need to recycle, make good food choices and address the environmental danger of plastics. Plastic water bottles, he admits, drive him nuts.

Magiera is now living off campus with other students who understand and respect his green commitment. They are constantly texting him to ask whether different items can be recycled.  One roommate, however, leaves his unfinished cans of beans and corn on the kitchen counter, knowing that Magiera will clean and recycle them properly.

"At least he's not just throwing it out," Magiera observed.

Like Magiera, fellow senior Reagan Mulqueen is quick to share the values and views she's developed about food and sustainable living. She is a business analytics major from Fort Worth, Texas, and has a minor in sustainability, a new area of study at Notre Dame. She is one of Notre Dame's current 10 sustainability interns and works with sustainability commissioners in student halls.

"I run monthly meetings to educate them on what the Office of Sustainability is doing. I make suggestions about how they can help to make their dorms and events greener," she explained. One initiative focused on showing students how to grow plants — microgreens — in their dorm rooms. Another session shared tips on how to reduce or eliminate food waste at dorm parties. 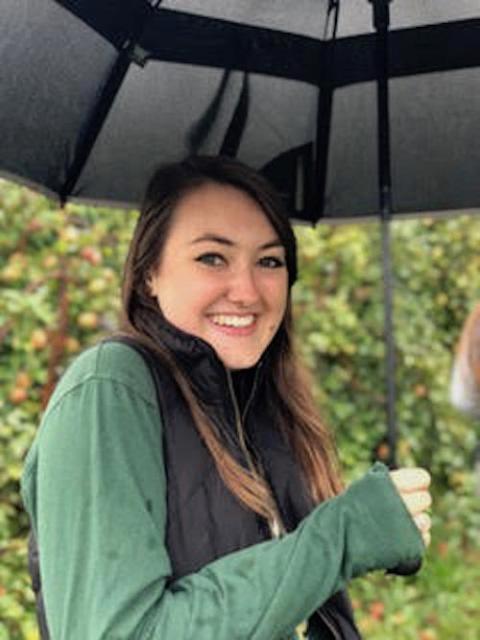 Mulqueen's involvement in food use began during her freshman year. She joined Food Rescue U.S., a student club that delivered unused food from the dining halls to homeless shelters in South Bend. The next year, the club merged with another, larger food rescue group. Mulqueen and another student organized delivery schedules of meals to various shelters in the city.

Today, the Campus Food Recovery Project and its 50 student volunteers make 18 deliveries each week. According to a university report, during the spring of 2018, the project rescued and donated 49,910 meals.

"I grew up eating dinner with my family every night," Mulqueen said. Her parents cooked together and made it clear that their children should be thankful for their food. "We always said grace, and I understood that food was a blessing. I didn't really see food wasted until I came to college."

Magiera and Mulqueen both acknowledge that not everyone they've met at Notre Dame is committed to sustainable living, including some of its most visible expressions: recycling, reducing consumption, avoiding food waste and sharing food.

"When I was living in a hall, I was a sustainability commissioner," Magiera said. "I ran into that pushback. When you live with maybe 280 people, you can't make them all follow the rules for recycling. I would try to talk to people about the right way to recycle or rinse out cans or bottles. They'd tell me that it all goes to the same place, which isn't really true. … But I do think that the Office of Sustainability efforts do filter down to the students."

Mulqueen agreed but thinks the problem is that "some people don't fully understand the benefits of living sustainably and how everything is really connected."

She adds: "A lot of people will agree but won't make those changes for themselves. That's why it's so important for people who are passionate about sustainability to do everything they can do to show how they live it."

*This article has been updated to specify the scope of waste reduction underway at Notre Dame.