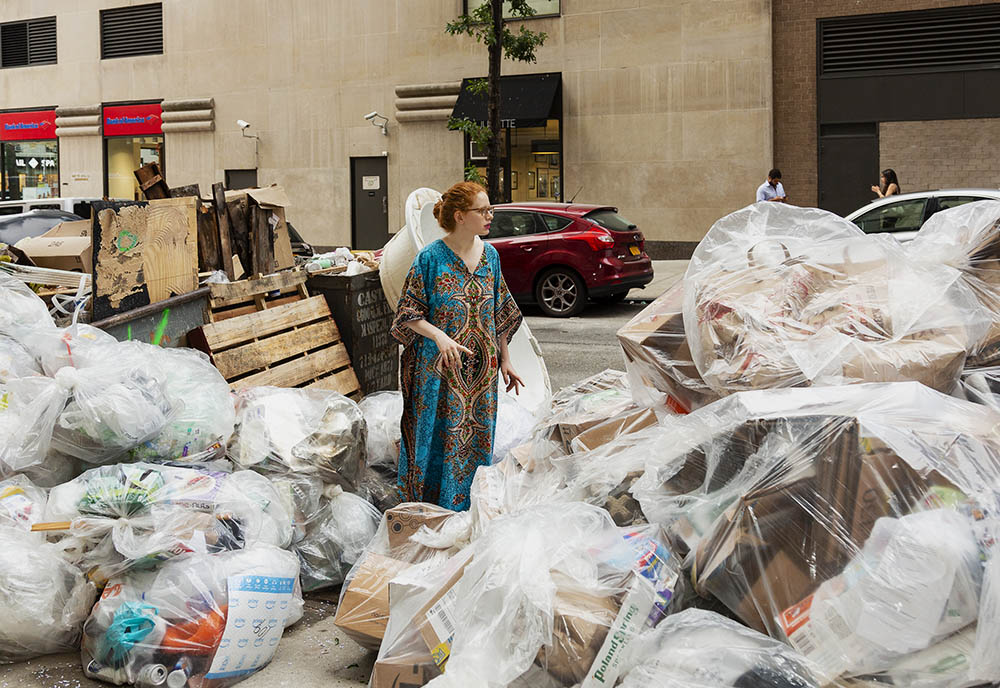 Anna Sacks, known online as @thetrashwalker, has gone viral for sharing her trash finds, as well as for highlighting a practice of many retailers: destroying usable items before placing them in the dumpster. (Patricia Lopez Ramos)

Maggie Terry's idea of a great night out in New York City is a little different from many of her peers'. Rather than heading to her couch or a cocktail bar to unwind after a day of work, she looks forward to something else: dumpster diving.

The 24-year-old elementary school teacher and her husband, Michael, spend their evenings ("every day but Saturday," Terry says) digging through the trash for salvageable goods. Their finds are wide-ranging, from $400 worth of KitKats in a Walgreens dumpster one night to an antique Hartmann chest circa 1890 pulled from residential trash and valued at $3,000 the next. 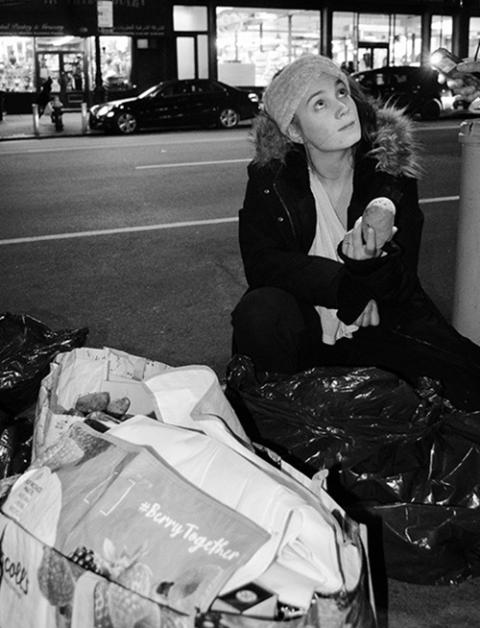 Maggie Terry: "It is crazy to think about just how much we consume and how little we care about it." (Caila Rentz)

The duo keeps what they can use — the Hartmann chest now serves as their coffee table — and redistributes the rest, by way of donation to food banks, charities, or just leaving goods out for free on their front stoop, where most items are taken by neighbors within 24 hours.

Before they pass their finds along, they share pictures or videos on social media via the handle @trash.pandas_ofnyc and carefully calculate the value of all they've found, tracking the metrics in a publicly available spreadsheet.

The numbers they report are staggering: Since November 30, 2019, the couple has found more than $155,000 worth of goods in the garbage.

Terry and her partner consider themselves part of a larger "trashing" community, which is dedicated to finding and rescuing discarded goods from commercial and residential garbage. While people get into trashing for a variety of reasons, many are motivated by the sense that valuable things are ending up in the garbage where they don't belong — and that ought to change.

The most visible member of this community is Anna Sacks, known online as @thetrashwalker. A former investment banking analyst, Sacks participated in a Jewish farming fellowship called Adamah that changed her life.

When she came back to New York City after seven months on a farm, she was newly struck by all the trash on the sidewalks — and how much of it was being tossed while still usable.

Sacks started to go viral for sharing her trash finds, as well as for highlighting a controversial practice implemented by many retailers: Not only do they throw out usable goods, but companies like Old Navy, Hallmark and Urban Outfitters often require their employees to first destroy items before placing them in the dumpster.

Some companies do this to avoid having to sell their goods at lower prices or giving them away for free, which they see as diluting brand value. Others, Sacks says, do it to take advantage of a tax loophole: There is a cap on the tax deduction corporations receive for donation of physical items, but there's no cap on the amount that companies can claim as a loss due to damaged goods. That law isn't meant to include goods the company damages on purpose, but the practice has become common nonetheless. 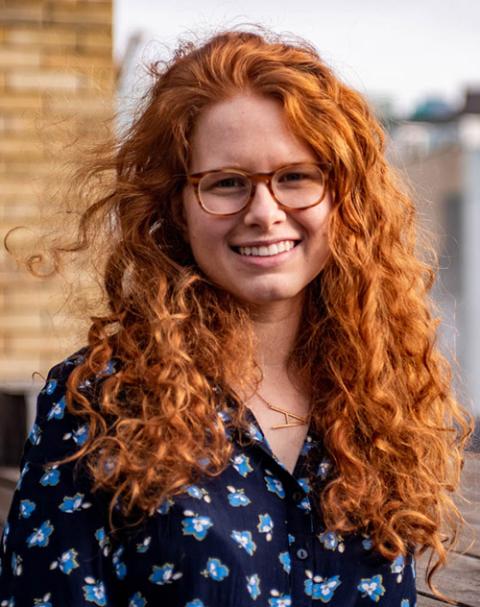 To Sacks, this attitude stands in direct conflict with the picture of responsible living painted by Jewish Scripture. She points to the idea of gleaning presented in books like Ruth to illustrate the idea that any margin or leftover material ought to be used to support the life and livelihoods of the poor.

And she reads Psalm 118:22 — "The stone the builders rejected has become the cornerstone" — as pointing to the beauty of taking that which is overlooked and doing something constructive with it, whether that's furnishing an apartment or stocking a mutual aid fridge.

As far as Paul Schutz, an assistant professor of religious studies at California's Santa Clara University, is concerned, the sentiment holds from a Catholic perspective, too.

"Scripture is full of these pretty harsh condemnations of people who waste," Schutz told EarthBeat. "From the standpoint of those biblical authors, creation itself is a gift of God, and it is to be treasured."

Schutz alludes to a vision of "treasuring creation" that should impact not just how we think about the Amazon rainforest and shrinking ice caps, but also the bags of wasted KitKats and intentionally destroyed clothes that Sacks and Terry have found in the trash.

These garbage bags overflowing with usable goods are evidence of what Pope Francis terms "throwaway culture" in his 2015 encyclical "Laudato Si', on Care for Our Common Home." 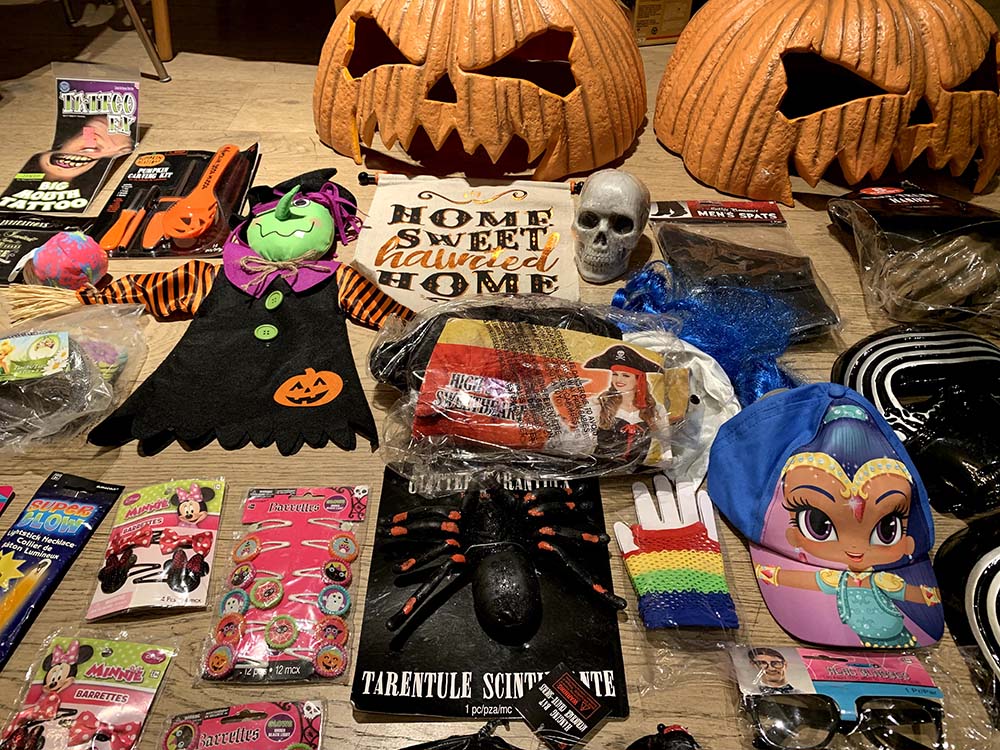 The emphasis on culture is crucial, Schutz said, because it highlights that these issues aren't just the result of a few individuals or companies behaving badly; they're ingrained in our larger system.

He narrows in on food as an example: The U.S. Department of Agriculture reports that 30-40% of food in the United States goes to waste. Our current industrial farming system "doesn't care if the food gets consumed — it cares if the food gets into stores and gets sold," he said.

That waste becomes particularly tragic when you consider that 10% of the country's population is food insecure, to say nothing of all the natural resources and labor that went into creating that food in the first place. 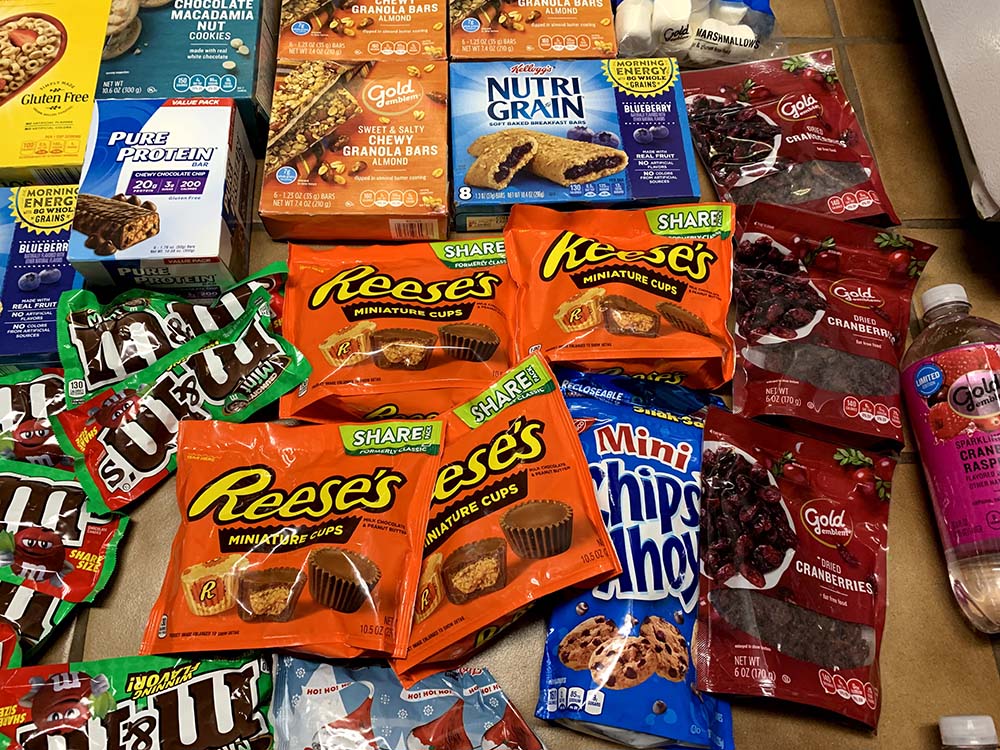 Discarded food found outside of a store (Courtesy of Anna Sacks)

"That disconnect is so, so antithetical to Christ's proclamation of justice," Schutz said.

Nevertheless, there are people trying to turn the waste problem around, whether they work as individual volunteers, nonprofits or businesses.

@stoopingnyc, a popular New York-based, volunteer-run Instagram account posts pictures and locations of home furnishings that are set out in the street, helping people rescue the items before they get scrapped. FabScrap exists to keep fabric from the city's many fashion companies out of landfills.

Materials for the Arts is a city-government-backed organization that collects as many as 1.7 million pounds of reusable materials from businesses and individuals in New York a year and redistributes them for free to arts nonprofits and public schools. And Manhattan's Gospel Mission collects and sorts still-good Trader Joe's food that would've been trashed and distributes it to the hungry. 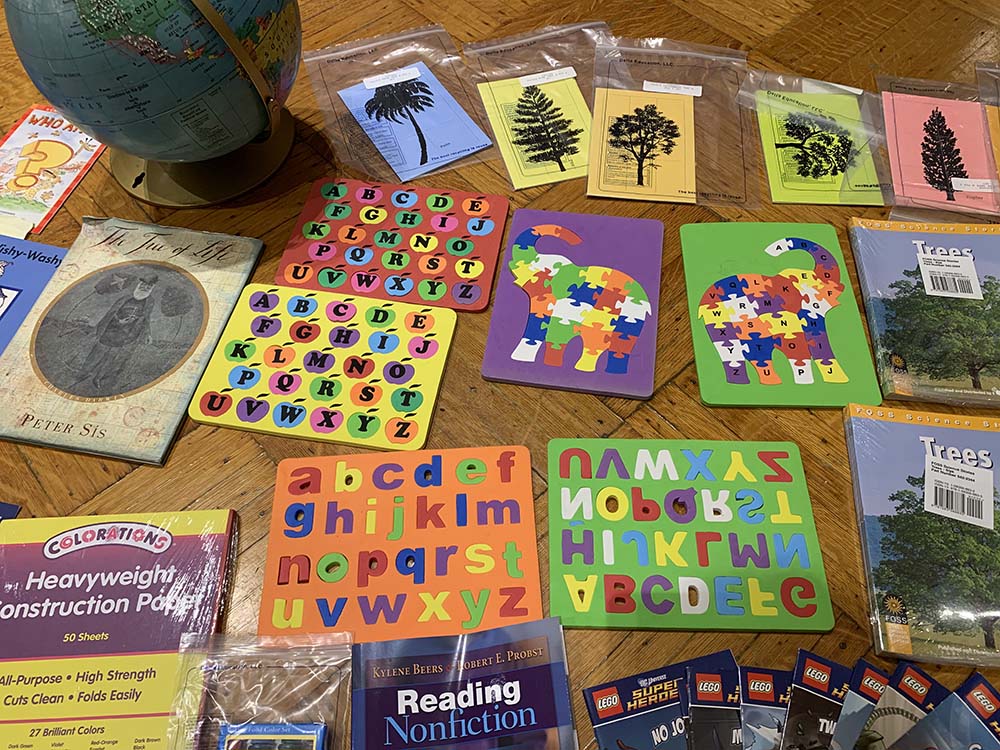 Though New York's prodigious wealth and conspicuous sidewalk trash piles might make it seem like one of the places that most needs an overconsumption overhaul, Terry points out that New Yorkers actually produce less trash than the average American.

Recognizing that what she sees in New York dumpsters is symptomatic of a larger issue, Sacks has begun assembling a coalition to push for federal-level "donate, don't dump" legislation that she describes as "bipartisan and commonsense." She imagines policies that might tax companies for consistent overproduction or mimic the anti-waste law France passed last year to ban the deliberate destruction of usable goods.

Until all that happens, though, Sacks, Terry and others like them will continue to roam the streets, opening dumpsters and saving what they can.

"One of our biggest hopes is simply to be good stewards," Terry said. "We're trying to care for the Earth in the little way that we can."