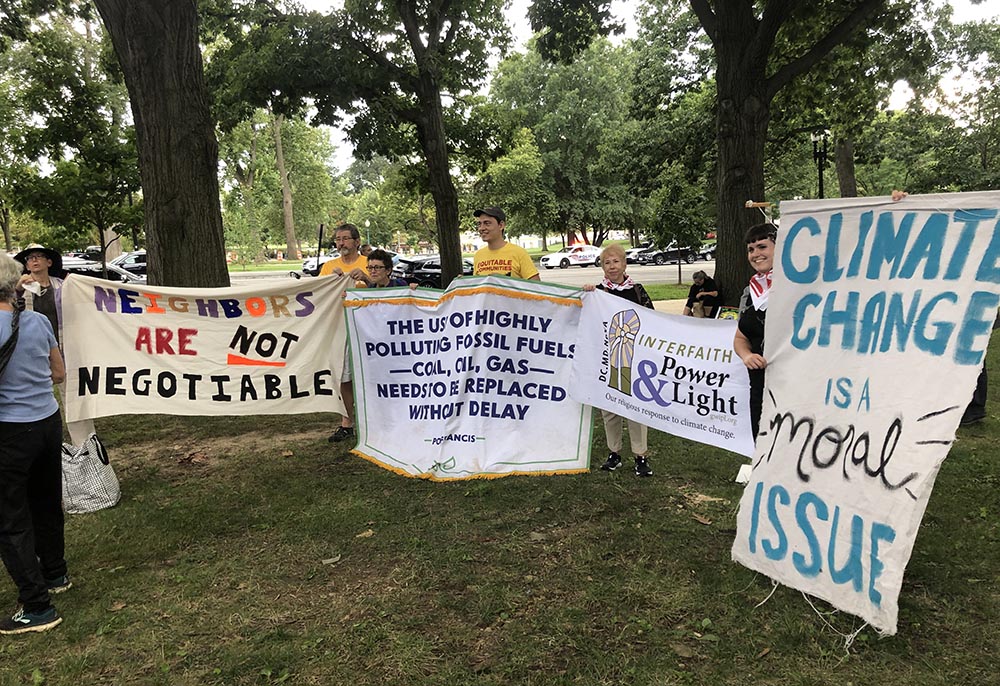 Representatives of faith groups hold banners for a group picture at the "No Sacrifice Zones: Appalachian Resistance Comes to D.C." rally on Sept. 8 in Washington, D.C. (EarthBeat photo/Aleja Hertzler-McCain)

Fresh off passage of the Inflation Reduction Act and its historic investments in combating climate change, Catholic groups who celebrated the new law are turning their attention to environmental justice concerns within it, as well as new legislation to protect communities in the path of future energy projects.

At the forefront is a proposed bill from Sen. Joe Manchin of West Virginia to streamline the permitting process for energy infrastructure projects. The legislation would shorten the timeline of environmental reviews for both fossil fuel and renewable energy projects and limit the timeframe that impacted communities could raise challenges in court.

The bill would also pave the way for completing the Mountain Valley Pipeline, a project championed by Manchin that would transport natural gas through West Virginia and Virginia. The pipeline is opposed by Appalachian community groups and environmentalists, who say it will pollute the region and continue U.S. reliance on fossil fuels.

Including the project in a future bill was part of a side deal struck between Sen. Majority Leader Chuck Schumer (D-New York) and Manchin in order to secure the Catholic Democrat's support for the Inflation Reduction Act, or IRA, which includes more than $300 billion in investments and policies to address climate change. Among its allocations is upward of $60 billion for environmental justice initiatives, such as improving air and water quality in low-income communities and grants to reduce pollution and install clean energy, as part of President Joe Biden's pledge to commit 40% of federal environmental spending to historically disadvantaged communities.

Manchin released details of his bill Sept. 21, and Schumer has said he intends to attach permitting reforms to a continuing resolution to fund the federal government that must be passed before Sept. 30 to avoid a government shutdown.

Several Catholic and faith-based groups have joined environmental organizations in opposing the Mountain Valley Pipeline, saying the approval of new fossil fuel infrastructure is deeply troubling. They have asked lawmakers to decouple permitting reform from the continuing resolution.

Catholics with the Sisters of Mercy, the Maryknoll Office for Global Concerns, the Franciscan Action Network, and the Dorothy Day Catholic Worker house joined other activists in Washington, D.C., on Sept. 8 to protest the Manchin-Schumer deal and fossil fuel provisions included in the Inflation Reduction Act.

"Without NEPA, we would have no voice," Mildred McClain, executive director of the Savannah, Georgia-based Harambee House/Citizens for Environmental Justice, said on a press call Sept. 22. 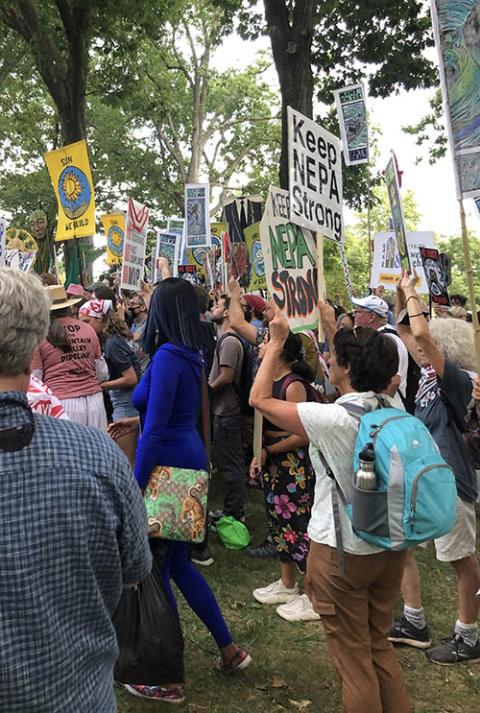 Protesters listen to speakers at the "No Sacrifice Zones: Appalachian Resistance Comes to D.C." rally on Sept. 8 in Washington, D.C. (EarthBeat photo/Aleja Hertzler-McCain)

At the D.C. rally, Russell Chisholm, co-chair of the Protect Our Water, Heritage, Rights coalition of environmental groups in Virginia and West Virginia that is working to stop the Mountain Valley Pipeline, told the crowd, "Injury, harm and injustice is being inflicted upon our communities by people who live far from the poisons, and the rising waters, and the fires, and the flaring and the fuming incinerators, and the coal dust and the Cancer Alleys."

Kirstin De Mello, who wore her Franciscan Action Network T-shirt to the protest, told EarthBeat that water supplies have already been harmed in parts of Virginia she's visited where the Mountain Valley Pipeline has been under construction.

Marianne Comfort, justice coordinator for the Sisters of Mercy of the Americas, said that while the Inflation Reduction Act does a good job of responding to the cry of the Earth — a reference to a key message in Pope Francis' encyclical "Laudato Si', on Care for Our Common Home" — it does not adequately respond to the cry of the people made poor, whom Francis has centered in his environmental teaching.

"We can't ignore the voices of Appalachia and the Gulf Coast that we heard at the rally," said Comfort. "It's very loud and clear that these communities feel sacrificed by the side deal, by the oil and gas leases that were part of the IRA."

Manchin's bill would move future litigation on the pipeline to the U.S. Court of Appeals for the D.C. Circuit and away from the 4th Circuit, which has rejected permits for the natural gas pipeline multiple times due to environmental issues. Schumer and Manchin have both received campaign donations from political action committees affiliated with the companies that are constructing the pipeline.

With the government funding bill requiring 60 votes in the Senate, some Republican senators have threatened to oppose Manchin's proposal as retaliation for his support for the Inflation Reduction Act, raising the likelihood that the measure will not have enough support. Meanwhile, Democrats, including Sens. Bernie Sanders and Tim Kaine, have said they oppose Manchin's permitting bill. 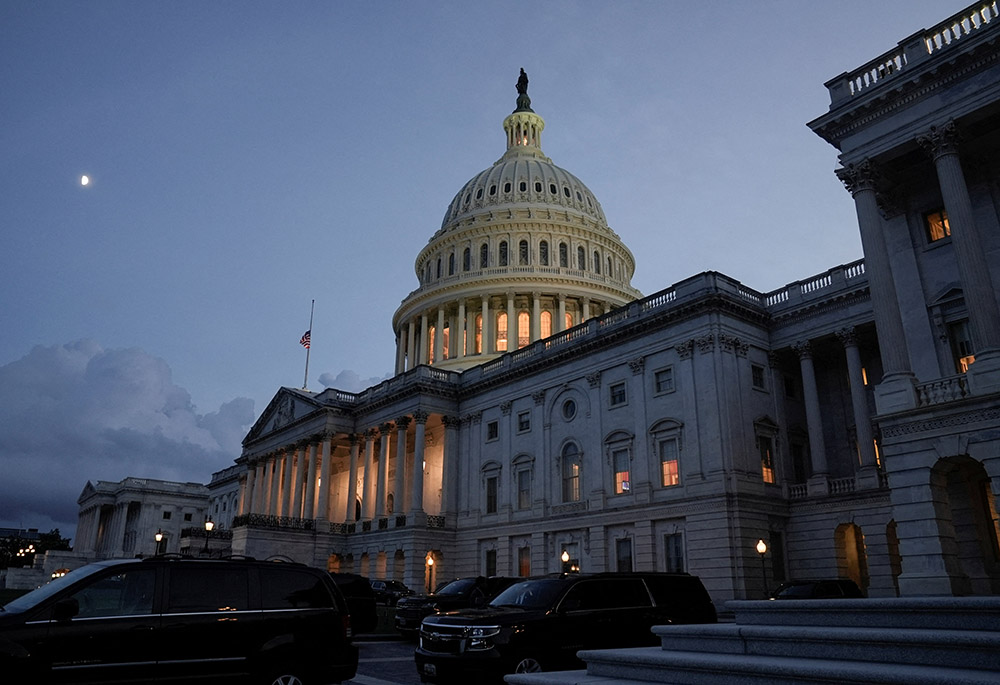 The U.S. Capitol is seen in Washington Aug. 6, after Vice President Kamala Harris voted on the Senate floor to break the 50-50 tie to proceed to consideration of the Inflation Reduction Act. (CNS/Reuters/Ken Cedeno)

An interfaith letter from an ecology and energy working group of 17 religious organizations, including several Catholic organizations, expressed concerns about several elements of the Inflation Reduction Act even while praising the law.

"Not only do concessions to the fossil fuel and other polluting industries take us in the wrong direction on climate action and undermine efforts to reduce emissions, they will disproportionately fall on communities placed on the frontlines of poverty, racism and pollution," the faith-based organizations wrote.

The letter raised concerns about the Inflation Reduction Act's support for carbon capture and storage, a technology promoted by fossil fuel companies to capture carbon dioxide emissions from industrial facilities and to remove carbon dioxide already in the atmosphere. While tax credits for the technology were issued before the act, few industrial facilities are currently using carbon capture and storage in the U.S., according to a congressional report.

"It still allows for polluting of communities as long as the carbon is captured. We still have all the other toxic pollutants that communities would be dealing with," she told EarthBeat.

In the letter, faith groups also expressed concerns about hydrogen and nuclear energy and further investments in fossil fuel infrastructure, particularly requiring the federal government to auction oil and gas leases in the Gulf of Mexico and Alaska. 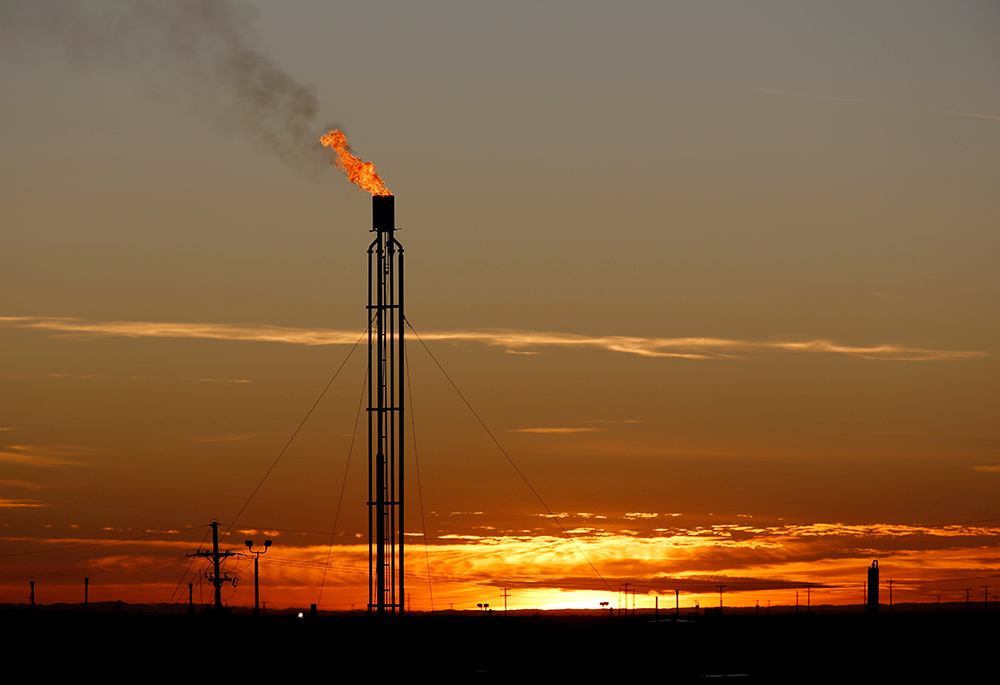 Comfort added that the Sisters of Mercy are concerned about the law's incentives for continued car use through electric vehicle ownership instead of promoting expanded public transportation.

Sr. Louise Lears, a Sister of Charity of Cincinnati who works on creation care advocacy for the Franciscan Action Network, said, "We want to make sure that the way the IRA is implemented and then in other future legislation too, that no one is left behind, that we don't make some of the same mistakes we made in building the fossil fuel economy."

Speakers at the Sept. 8 rally came to the nation's capital from communities facing environmental damage all around the U.S. They drew connections between the environmental struggles of Appalachians and the hazards faced by communities of color and low-income people in other "sacrifice zones."

"Our people are dying because of our politicians," said Sharon Lavigne, a Louisiana Catholic activist with Rise St. James. She also talked about her fight against the construction of a massive plastics plant in St. James Parish, part of "Cancer Alley." On Sept. 14, the factory was blocked by a state district court. 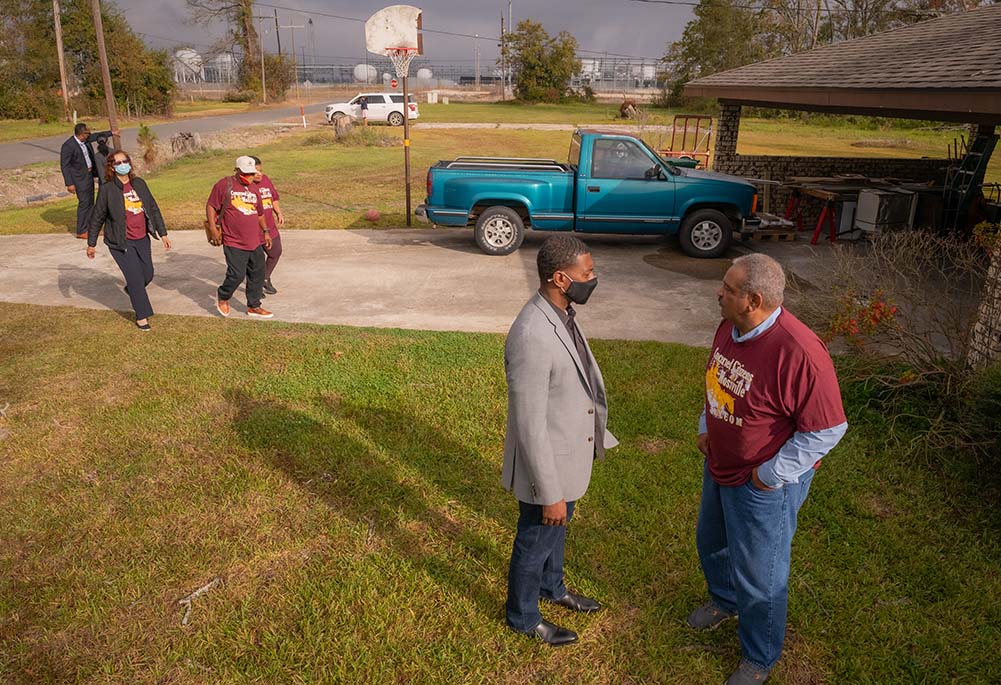 That bill has drawn attention from Catholic organizations. The Environmental Justice for All Act has been introduced in both chambers of Congress by Rep. Raúl Grijalva (D-Arizona), a Catholic, and Sen. Tammy Duckworth (D-Illinois). The bill was created after two and a half years of consultation with communities impacted by environmental racism.

The proposed legislation allows private citizens and organizations to pursue lawsuits on the basis of discrimination due to disparate impact on marginalized communities protected by law, which would overturn a 2001 Supreme Court decision. The bill also allocates money for environmental justice grants and outdoor recreation opportunities in underserved urban communities.

Catholic groups have also lent support to another bill from Grijalva, the Clean Energy Minerals Reform Act. An interfaith coalition of 57 faith groups, including numerous women religious congregations and Catholic organizations, wrote a letter in August to legislators in support of the bill, which would reform mining laws in line with environmental justice principles.

"We, from many faith-based organizations, ask Congress to ensure that laws governing the natural resources central to building a clean energy economy are just, equitable, and reflect our values," the interfaith coalition wrote.

Catholic advocates anticipate that the Inflation Reduction Act's new investment in electric vehicles and renewable energy will drive demand for minerals like lithium, cobalt and copper. "Native communities are way disproportionately located near these sites where these minerals are located," Comfort said.

"There hasn't been a bill about mining for like 150 years," said Lisa Sullivan, Maryknoll's Faith-Economy-Ecology director, emphasizing the need for new legislation.

Beyond legislative advocacy campaigns, Catholic groups are also focusing on environmental justice education within their own communities. In September, the Franciscan Action Network began a webinar series on environmental racism, featuring three short documentaries from the Hip Hop Caucus called "Big Oil's Last Lifeline." The first three gatherings will host a speaker from a sacrifice zone featured in the documentary. The next will take place Oct. 13.

"We feel it's a really wonderful opportunity for learning and for advocacy," Lears said.

A version of this story appeared in the Oct 14-27, 2022 print issue under the headline: Catholic groups push to further environmental justice.