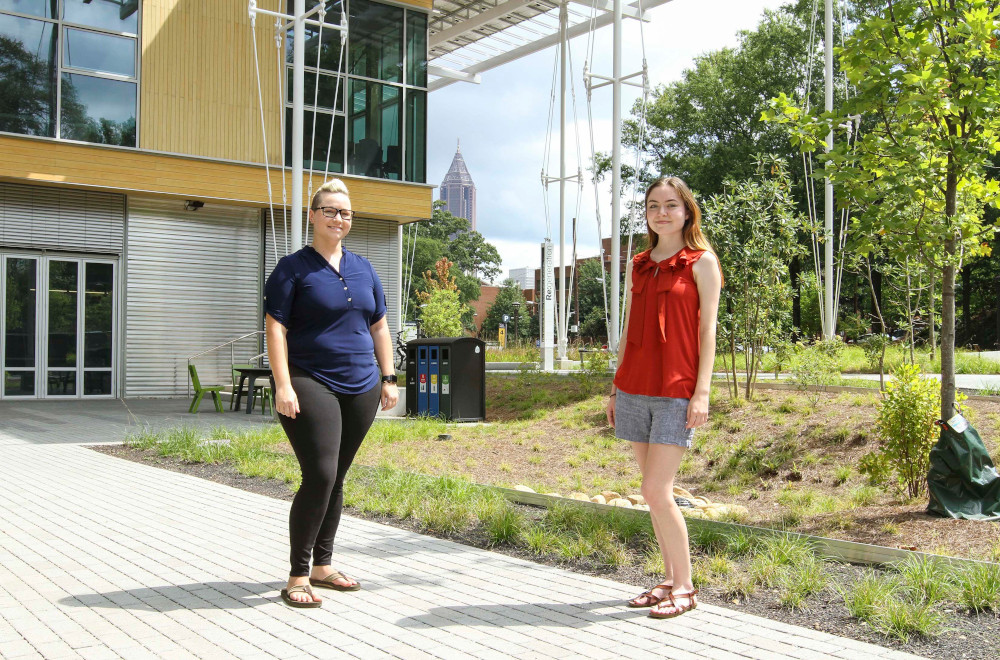 Michelle Babcock and Rachel Mohr pose for a photo Sept. 10, 2020, in front of the Kendeda Building for Innovative Sustainable Design at Georgia Tech University. Catholic Relief Services is adopting the students' proposal to reduce an estimated 6 million to 9 million pounds of carbon dioxide emissions among the agency's more than 1,300 vehicles. (CNS photo/Georgia Bulletin/Michael Alexander)

While staffers with Catholic Relief Services delivered needed supplies to far-flung parts of the globe, students at the Georgia Institute of Technology studied how the agency's missions of mercy could be done with fewer car emissions that contribute to a warming planet.

CRS adopted the green proposal, brainstormed in Atlanta, to rethink how it uses its more than 1,300 vehicles around the world. It will revamp its fleet to better match the missions in the 114 countries where the nonprofit works.

The students found CRS could save more than half a million dollars a year once fully implemented and reduce emissions, one of the drivers of climate change, according to estimates.

"The less fuel you burn, the less money you spend, there is more money to go into projects," said Michael Bieger, global fleet manager at CRS, which is the U.S. bishops' overseas relief and development agency.

Bieger said the students brought their know-how of atmospheric science and its impact on the environment, while CRS had the fleet knowledge and its history of working across changing economic development conditions around the world.

The students used "thousands and thousands of lines of data" to understand how the international nonprofit serves people, said Babcock. "A million (lines of data) is a lot, but that's what it felt like," she told The Georgia Bulletin, newspaper of the Archdiocese of Atlanta.

"It was the best possible outcome," said Babcock. "It totally exceeded my expectations. I don't think we could have a better organization to work with. I have taken action on something I have always cared about."

While the study focused on CRS, Mohr said its lessons can be shared with other nonprofits. Any organization that relies on vehicles for its services can save money and contribute to a better environment with a planned replacement period to benefit from better fuel efficiency and conservative vehicle usage, she said.

The proposal projects a reduction of 6.28 million to 9.35 million pounds of carbon dioxide, or CO2, annually. The average passenger vehicle in America is responsible for about 10,000 lbs. of CO2 annually. The students' proposal aims to save more than 600 times that amount annually, at least.

CRS and humanitarian workers use an estimated 100,000 vehicles to deliver services, but the organizations traditionally have not had the resources of for-profit businesses to systematically analyze its fleets.

Bieger said the needs are different among corporate fleets in the United States, where the focus is on lowering mobility costs, and in the developing world, where fleet needs are focused on getting people and supplies to often hard-to-reach areas.

The study adopted by CRS leadership recently showed that in less than five years, emissions from its fleet will be reduced by as much as 42 million pounds and save millions of dollars.

It also matches CRS' commitment as a member of the NGO Climate Compact, a pledge that addresses the threat of climate change.

Cutting car emissions is a key to curbing climate change, said Babcock. In the U.S., emissions from cars' exhaust pipes is a leading cause of CO2 being in the atmosphere. CO2 is linked to global warming and climate change.

Key factors in achieving the results for CRS will be using sedans for both city and long-distance driving, strategically replacing older cars with more fuel-efficient models, and other practices.

Bieger said more thought needs to be put into what cars are used so they match its purpose. Instead of relying on a fuel-hungry SUV for driving in a city or long distances, staff should drive sedans and hybrid cars, he said.

One of the first ideas to be implemented is changing how cars are used, especially cutting idling times, said Bieger.

CRS cars sometimes idle for hours during project visits or meetings, according to its data. Rohr and Babcock found if 70% of idling is eliminated, CRS will save more than 28,000 gallons of fuel, $96,800 and 567,500 pounds of CO2 a year, according to estimates.

This change will be more about changing customs and culture, than any dollar expense. A small behavior change can have a significant impact.

"It costs nothing to implement. It is such a large savings for no investment," said Babcock.