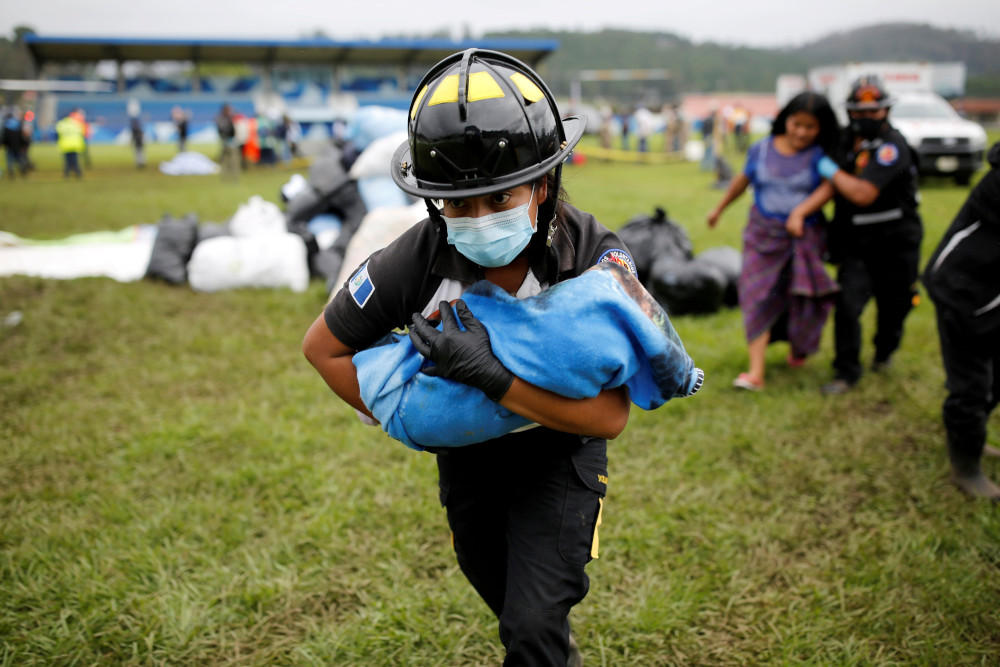 A firefighter carries a baby rescued along with her mother from an area affected by mudslides in San Cristobal Verapaz, Guatemala, Nov. 7, 2020, caused by the remains of Hurricane Eta. (CNS photo/Reuters/Luis Echeverria)

After reciting the Angelus Nov. 8, he referred to a flag in the audience and said, "I see a flag there that makes me think of the people of Central America."

The pope prayed for those "struck by a violent hurricane, which has caused many victims and enormous damage, aggravated by an already difficult situation due to the pandemic."

"(May) the Lord welcome the deceased, comfort their families and sustain all those so tried, as well as all those who are doing their best to help them," he said.

Caritas, the church's humanitarian aid agency, was responding to Eta, which came ashore in Nicaragua Nov. 3 and provoked devastating flooding and destruction even as it weakened and moved through Central America.

Churches throughout the region opened emergency shelters and started collecting food and household items for those affected, said Arturo Herrera, a Caritas official in the Diocese of Zacapa in eastern Guatemala.

"(It's) affecting communities that are not so close to urban centers," Herrera said. "They are low-income communities where the majority of the population is indigenous." 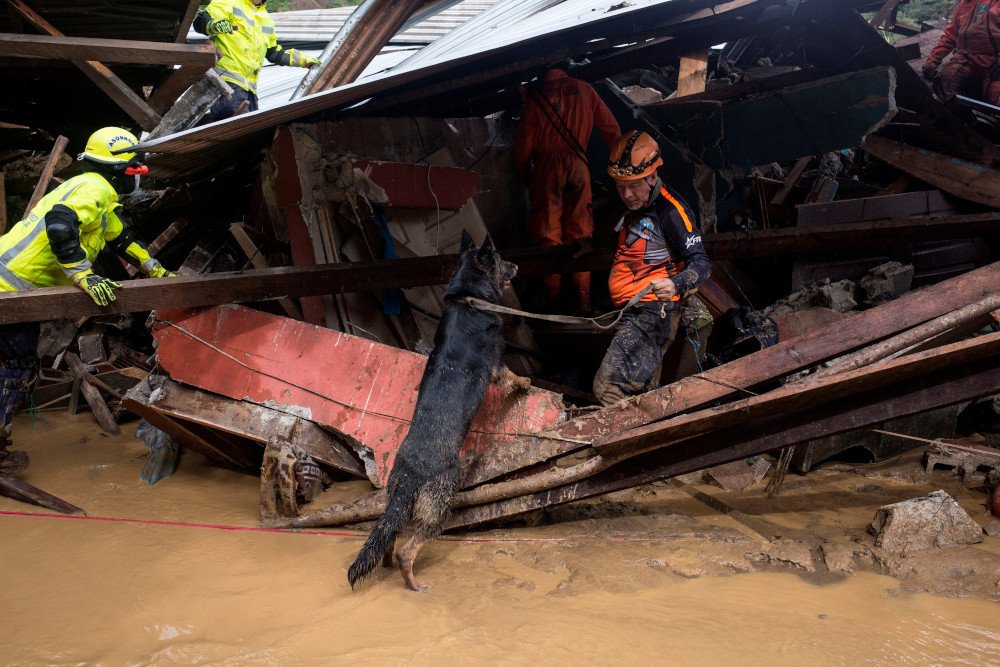 Rescue personnel using a search dog work at an area hit by a mudslide in Queja, Guatemala, Nov. 7, 2020. (CNS photo/pool via Reuters/Esteban Bilba)

Guatemala's bishops called on the country's authorities to "rescue and immediately support those affected in the northeast departments of the country. We expect that in no way will the support needed by those suffering directly today will be hindered or delayed."

The Nov. 6 statement also urged all Guatemalans "to carry out the national fraternity beyond the very situation of poverty and anguish that the COVID-19 pandemic is leaving."

In Honduras, flooding in the northern part of the country was reported before Eta's arrival and worsened as the storm passed through the country

Rising rivers washed away bridges and inundated neighborhoods in San Pedro Sula, the country's largest city in the north, and in towns and villages along the north coast. Honduran officials put the death toll at 26 and said more than 1.7 million people were impacted by the storm.

Cardinal Oscar Rodríguez Maradiaga of Tegucigalpa used his Nov. 8 homily to urge solidarity among Hondurans as they rebuild the country.

"Now is the time to increase our faith," he said in a message Nov. 5. "We must work together in our parishes and our communities to get through this, with our faith put in the Lord Jesus."

Catholic officials say hurricanes are common in Central America, but such a strong storm has not battered the region since Hurricane Mitch dumped unprecedented precipitation on Central America in 1998, leaving 9,000 dead and causing enormous damage to property and infrastructure.

"In more than 40 years in Honduras, I had never seen so much destruction and damage," Franciscan Fr. Alberto Gauci said in an email from the Diocese of Olancho.

The church in Olancho set up shelters, which provided accommodation for 200 people, he said, and "everyone here is lending a hand."