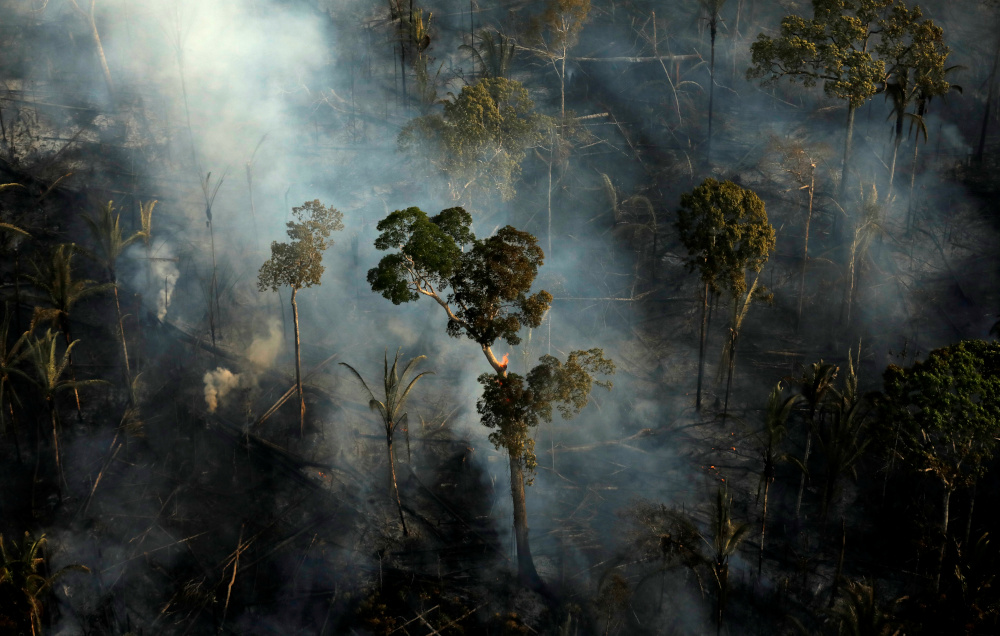 Smoke billows during a fire in an area of the Amazon rainforest near Porto Velho, Brazil, Sept. 10, 2019. During a high-level meeting at the United Nations Sept 23, Cardinal Pietro Parolin, Vatican secretary of state, said, "We all recognize how important forests are for the whole world and indeed for the very future of humanity: they are the world's most reliable renewable resource and are essential for integral human development." (CNS/Reuters/Bruno Kelly)

At a time of increasing urbanization, the "irreplaceable importance" of forests is being "taken for granted and underestimated," the Vatican's secretary of state said Sept. 23 at a high-level meeting at the United Nations.

"We all recognize how important forests are for the whole world and indeed for the very future of humanity: They are the world's most reliable renewable resource and are essential for integral human development," Cardinal Pietro Parolin said.

Education about forests "is crucial so that people will regard them not merely as resources to be harnessed, but also as a sanctuary to be cultivated and constantly replenished," he said.

The protection of forests and education about them is urgent "as the rapid destruction of forests risks the loss of species and vital relationships that could end up altering the entire ecosystem."

The high-level meeting was themed "Multilateral Action in Favor of the Protection of Rainforests" and held as part of the Climate Action Summit. Parolin also addressed a high-level U.N. meeting on universal health care the same day.

He was at the U.N. as the head of the Vatican delegation to the 74th session of the U.N. General Assembly. Later in the week, he was to address two other high-level side events, one on ensuring a future for persecuted Christians and one on small island developing states.

The evening of Sept. 23, the cardinal delivered greetings from Pope Francis to attendees at the Appeal of Conscience Dinner. He also was to address a small group at Fordham University the evening of Sept. 27 about themes related to the pope’s recent trip to Africa: peace and reconciliation, Mozambique; extreme poverty and the environment, Madagascar; and interfaith-intercultural dialogue and migration, Mauritius.

"Great human suffering arises from the wanton destruction of forests," Parolin said in his address at the high-level meeting on rainforests. "The impact falls mainly on those who depend on forests for their home, livelihood, cultural heritage and social structures."

Echoing Francis' 2015 encyclical on the environment, he said: "Care for our common home, and care for our brothers and sisters in that home, must go together."

The cardinal called for "integral ecology and integral development, balancing the responsible use of forests for economic and social development with protecting and preserving them for the good of those who depend on and care for them, and for the good of humanity and future generations."

He added, "Decisions to improve the management of our forests must be undertaken with the full and meaningful participation of those whose rights, values and lives will be most impacted."

Parolin noted that in two weeks, Francis convene a Synod of Bishops the Amazonian Region.

A major focus of the Oct. 6-27 synod will be recasting the mission of the church in a vast region that wrestles with complex political, cultural, ecological and pastoral issues, and where indigenous people must cope with historical injustice and ongoing threats to their way of life.

"Several other important ecosystems and vast biomes also face serious threats, such as the Congo Basin, the rainforests in Southeast Asia, as well as national forests and vegetation covers," Parolin said.

He noted the situation in Madagascar, which has lost 21 percent of its total forest since 2001. He accompanied Francis to that country as well as Mozambique and Mauritius in early September.

Meeting with national leaders, civil society representatives and the diplomatic corps accredited in Antananarivo, Madagascar, he said, the pope "spoke passionately about how protecting our forests must comprise part of integral development and care for our common home."

He quoted Francis: "Your lovely island of Madagascar is rich in plant and animal biodiversity, yet this treasure is especially threatened by excessive deforestation. ... The deterioration of that biodiversity compromises the future of the country and of the earth, our common home."

Parolin said the pope noted that several destructive activities "are reluctantly done by poor inhabitants to ensure their survival. He therefore underlined that to protect the environment, jobs must be created to help them emerge from poverty."

In conclusion, the cardinal told his U.N. audience: "The crisis of the rapid destruction of our forests, especially our rainforests, is not just environmental, but also social and above all ethical."

He said strategies to address this crisis that must employed "without delay" must take "an integrated, multilateral approach that combats poverty and restores dignity to the excluded, at the same time as it protects this precious, indispensable and endangered gift."