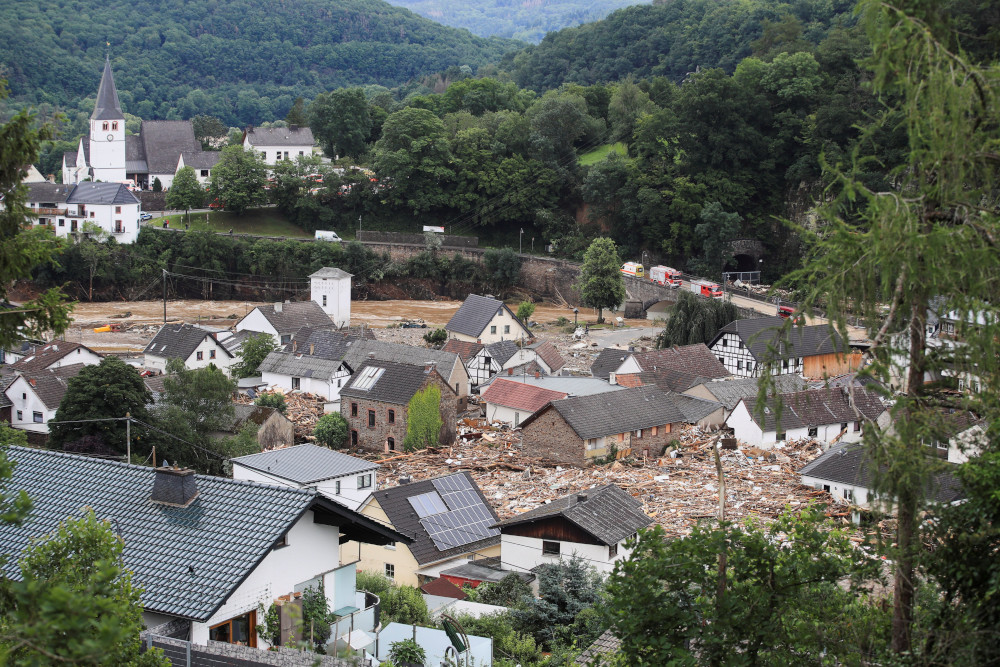 Debris surrounds homes following flooding in Schuld, Germany, July 15, 2021. Pope Francis offered prayers and expressed his closeness to the people of Germany after severe flooding in the western part of the country claimed more than 80 lives. (CNS photo/Wolfgang Rattay, Reuters)

Pope Francis offered prayers and expressed his closeness with the people of Germany after severe flooding in the western part of the country claimed the lives of at least 100 people.

"His Holiness remembers in prayer those who lost their lives and expresses to their families his deepest sympathy," said a telegram sent by Cardinal Pietro Parolin, Vatican secretary of state, to German President Frank-Walter Steinmeier.

"He prays especially for those who are still missing, for the injured and for those who have suffered damage or lost their property due to the forces of nature," said the message, which was released by the Vatican July 15.

A series of severe rainstorms also struck other countries in Europe, including Belgium, Netherlands, Switzerland and Luxembourg, causing massive flooding and mudslides that leveled homes and buildings.

In Germany, authorities had confirmed the death of 81 people by early July 16; that total later surpassed 100. At least 20 people had died in Belgium. While rescue workers continue working to save people stranded on rooftops, an estimated 1,300 people remain unaccounted for, The New York Times reported.

Bishop Georg Bätzing of Limburg, president of the German bishops' conference, also issued a statement July 15, expressing his hope that the missing "will be found unharmed, and that all those in need, who have lost their belongings or the roof over their heads, will receive comfort, hope and help."

"My heartfelt thanks and all my respect go to all those who have been tirelessly and selflessly providing help since yesterday, often risking their own lives in the process," Bätzing said, especially, "the rescue workers, the fire department, the police and all the people who help and stand by others."

He added via Twitter: "My thoughts and prayers are with the victims, relatives and rescue workers. Water normally stands for life. Here, water is death."

Emergency response and aid efforts were running in high gear as the flooding in western and southwestern Germany toppled buildings and washed away vehicles.

Officials said the situation in numerous cities and towns in the regions remained tense July 16 as many people remained missing and others could not be reached by rescue crews. Tens of thousands are without electricity.

German Chancellor Angela Merkel called the widespread flooding a catastrophe during a visit to the United States, where she met with President Joe Biden. Catholic bishops have also expressed their dismay as priests helped in the aid efforts.

In Bad Neuenahr-Ahrweiler, a particularly hard-hit area south of Bonn, one priest, Fr. Joerg Meyrer, helped in the emergency response. He told the German Catholic news agency KNA that the area was completely without fresh water and electricity.

"I just went to a neighboring village in order to recharge my mobile phone and go to the toilet. The town is, like the entire Ahr Valley, destroyed. I know of around 1,000 families who no longer have a place to stay," he said.

"Our three churches are no longer usable, whereby this is really not the most important thing. The situation in the city is catastrophic," he added.

Meyrer praised the work of volunteers, some of whom have been working around the clock.

"I have seen great attentiveness by the helpers and overall a great amount of readiness to help out," he said, adding that people are facing questions about the future.

"For, how do you supply a city where there is no water, no bread? Where the hotels are flooded. Cars are strewn across the streets, piled atop each other and destroyed. The situation is completely chaotic," he said.

Despite everything, the priest is convinced "that the Ahr Valley will prevail" because "the people are linked in solidarity. But it will take a long while and leave deep scars behind."

Cardinal Rainer Maria Woelki of Cologne said, "In my thoughts I am with all the people who are suffering from the devastating storm catastrophe in Germany."

Similar expressions of concern came from bishops Franz-Josef Overbeck of Essen, Stephan Ackermann of Trier and Peter Kohlgraf of Mainz. "We are experiencing much helplessness, but we also are seeing people who are helping out to the limits of their possibilities," Bishop Kohlgraf said.

Lutheran Bishop Heinrich Bedford-Strohm, council chairman of the Evangelical Church in Germany, a federation of 20 Lutheran, Reformed and United Protestant regional churches and denominations, wrote on Facebook: "The water that many people were yearning for during the dry period has become a calamity."