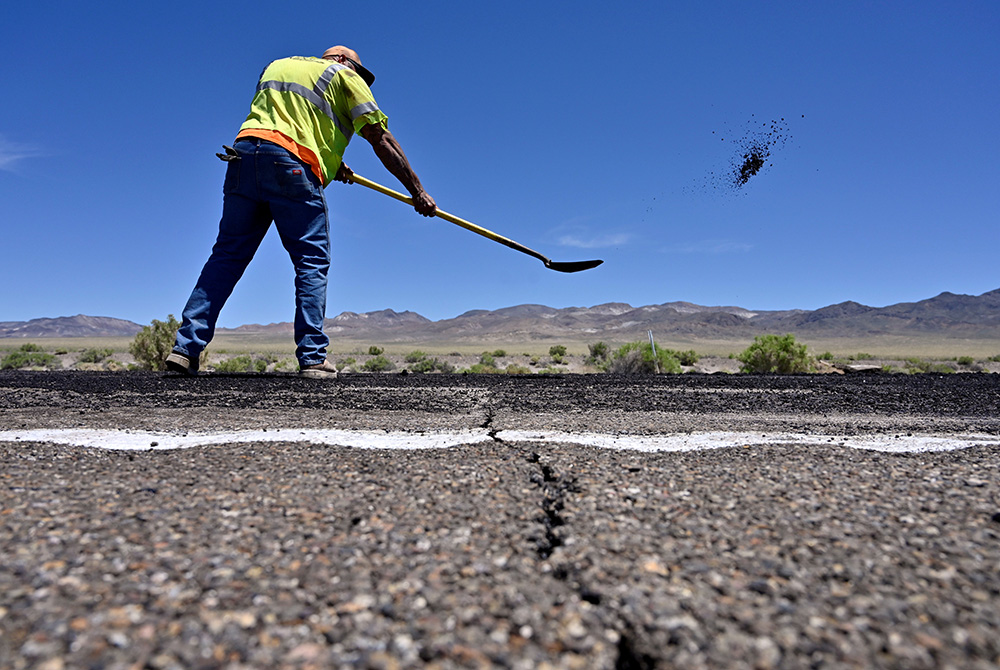 A Nevada Department of Transportation worker repairs damage to Highway 95 near Tonopah, Nevada, May 15, 2020. President Joe Biden's American Jobs Plan calls for investing more than $2 trillion over the next decade in upgrading the nation's roads, bridges, buildings and energy grid as part of a transition from fossil fuels to clean energy within 15 years. (CNS/David Becker, Reuters)

When a family dispute just seems like it can't be solved, sometimes the best solution is to work on a home project together: painting the garage, upgrading the bathroom or kitchen, or finishing the basement. And in the process of building, family members also talk through their issues.

It's that analogy that Sen. Raphael Warnock of Georgia believes may fit the American family, too, with President Joe Biden's $2.3 trillion infrastructure plan just the big project not only to build a clean energy economy of the future, but also to repair national rifts along the way. 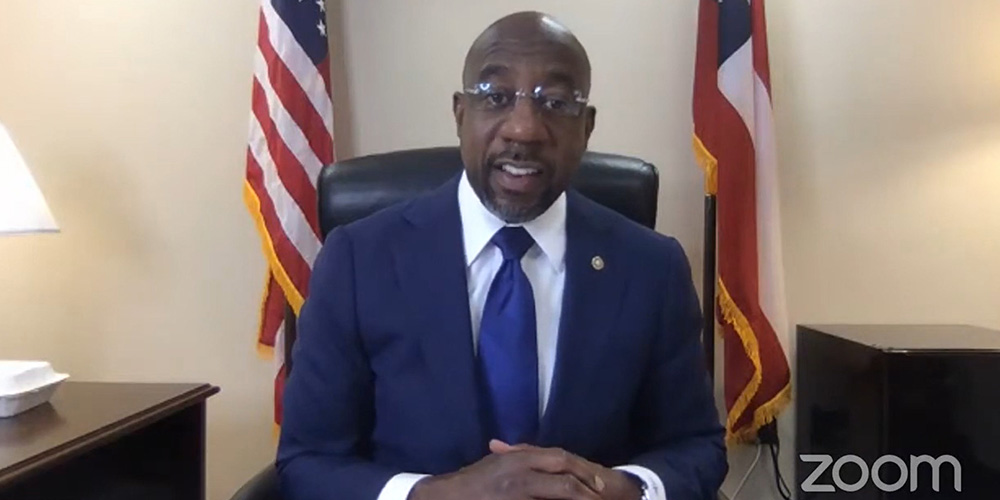 "We need to get engaged and investing in the spaces that we share together for the sake of our future," he said. "And while we're doing that, while we're building based on vision, I think we will push back against some of the forces of division in our country."

Warnock, who is also senior pastor of Atlanta's renowned Ebenezer Baptist Church, spoke to the environmentally focused faith leaders before Biden addressed a joint session of Congress where he sought to sell his American Jobs Plan to legislators and the American people. 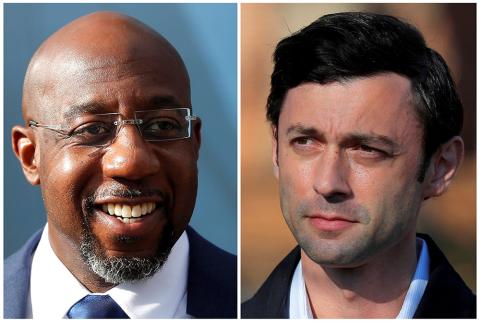 The sweeping plan calls for investing more than $2 trillion over the next decade in upgrading the nation's roads, bridges, buildings and energy grid as part of a transition from fossil fuels to clean energy within 15 years. It would also ensure that 40% of benefits go to historically disadvantaged communities, including those that suffer from exposure to disproportionate levels of pollution.

It was Warnock's election, alongside fellow Democrat Jon Ossoff, in a special election in January that paved the way for ambitious blueprints like the American Jobs Plan to have a chance at passage. The two new Georgia senators split the Senate 50-50 between Democrats and Republicans, leaving Vice President Kamala Harris to cast the deciding vote in case of a tie.

Still, the American Jobs Plan faces a long road to go from renderings to reality.

Republican senators have balked at paying for the plan by raising corporate taxes lowered in 2017. They have put forward their own $600 billion proposal, which omits things like elder care, child care and electric vehicle investments they don't consider to be traditional infrastructure.

And Democratic Sen. Joe Manchin of West Virginia, a linchpin vote, has raised his own doubts about the price tag, while progressive environmental groups have pushed Biden to increase the spending to $10 trillion over the decade.

Warnock said that addressing climate change is "urgent" and that the country is at a tipping point in how it responds. Under his leadership, Ebenezer Baptist Church adopted parts of the Atlanta Archdiocese's Laudato Si' Action Plan for implementing Pope Francis' 2015 encyclical on the environment.

He encouraged IPL members to stay engaged with their local communities, and in their push for environmental and climate justice to recognize the interconnections across issues — among them, voting rights in the form of the For the People Act and the John Lewis Voting Rights Advancement Act, to buttress "the infrastructure of our democracy." 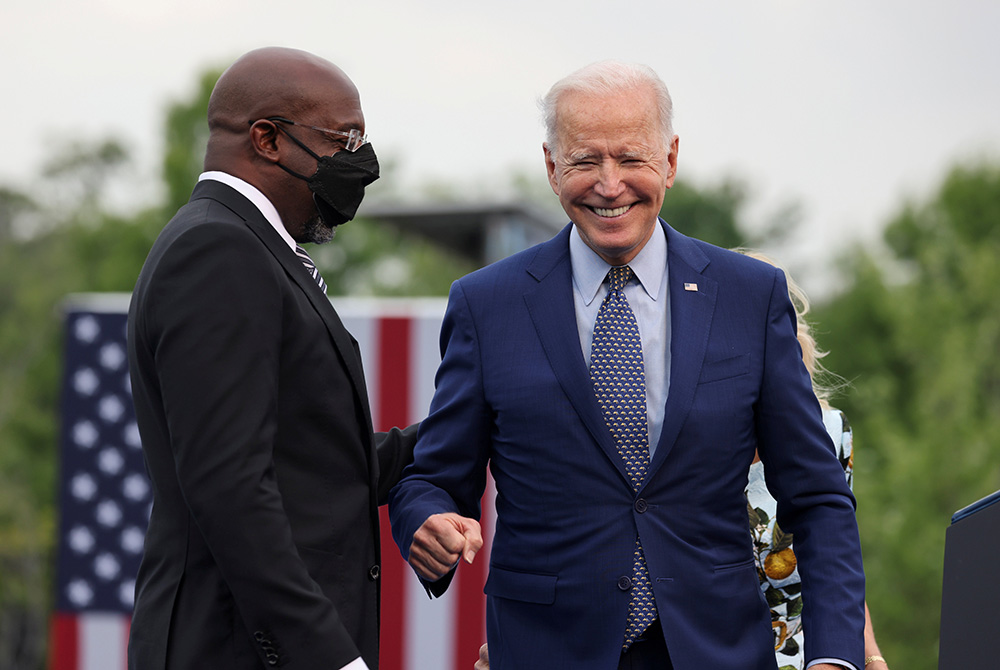 The Georgia senator called those bills a shield against efforts in state capitals across the country, including in Georgia, to roll back voters' rights in a form of "democracy in reverse," in which politicians "cherry-pick" their voters, rather than the voters electing their leaders.

"And if the politicians get to cherry-pick their voters, they can do the bidding of those who want to get in the way of the future, which is clean energy, clean jobs," he said.

Warnock highlighted how he and others helped broker a deal to complete a battery plant in Commerce, Georgia, and the American Jobs Plan's proposed expansion of rural broadband, a critical element in his home state, where 10% of the population lacks access and nearly four in 10 have only one option for service.

The webinar came near the end of Interfaith Power and Light's annual Faith Climate Action Week. Leaders on the call told how the Georgia chapter was taking part in Project Drawdown, a global effort to focus on high-impact climate solutions that would be most effective in local areas. Others shared resources for contacting their representatives in Congress and explaining the faith basis for their support for the American Jobs Plan and the For the People Act.

"We need all of us to be keeping the pressure on Congress and encouraging that and ensuring that they're hearing from people of faith on these critical issues," said Tiffany Hartung, IPL national field director.

Within the American Jobs Plan, Jonathan Lacock-Nisly, a federal policy associate for the national IPL office, applauded the establishment of the first national clean energy standard, with the goal of net-zero emissions in electricity by 2035, and an extension of clean energy investments first enacted in the 2009 stimulus package.

Lacock-Nisly said that although only a fraction of that $800 billion Obama-era bill focused on clean energy, it "helped launch a clean energy revolution in the U.S." and made solar and wind energy more affordable. With far greater investments proposed by Biden, he added, "just think about what we can do if we get that package passed." 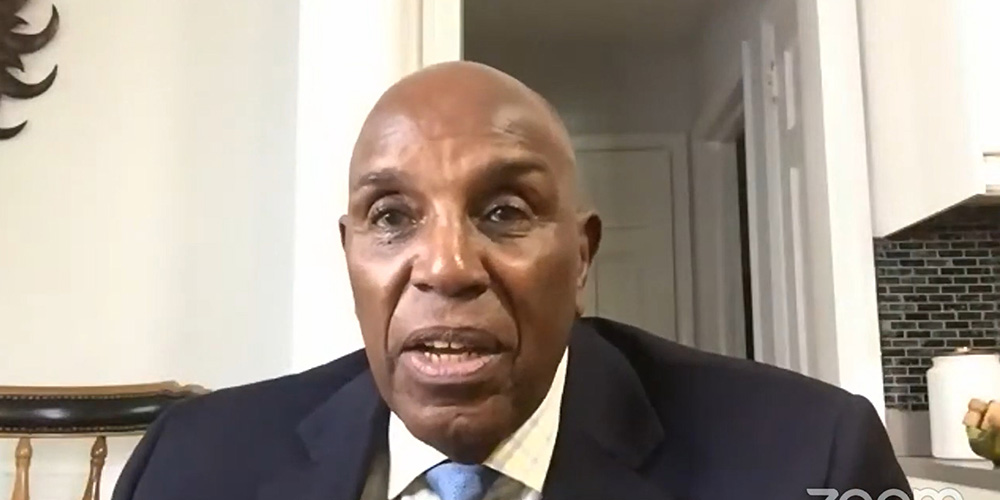 The Rev. Gerald Durley, chair of the Interfaith Power & Light board of directors and pastor emeritus of Providence Missionary Baptist Church in Atlanta, speaks during the April 28 webinar. (NCR screenshot)

The Rev. Gerald Durley, chair of the IPL board of directors and pastor emeritus of Providence Missionary Baptist Church in Atlanta, said that "the environmental movement is the new civil rights movement."

A major role for faith leaders, he added, is to help people not feel discouraged about climate change and legislative impasses, to get them more involved and to "connect the dots" about how a warming world is impacting their lives right now, from health to economics to education, and how "voting is imperative to changing what it is that the political leaders do."

Related: Environmental groups mobilize to make sure 'build back better' isn't just a slogan for Biden