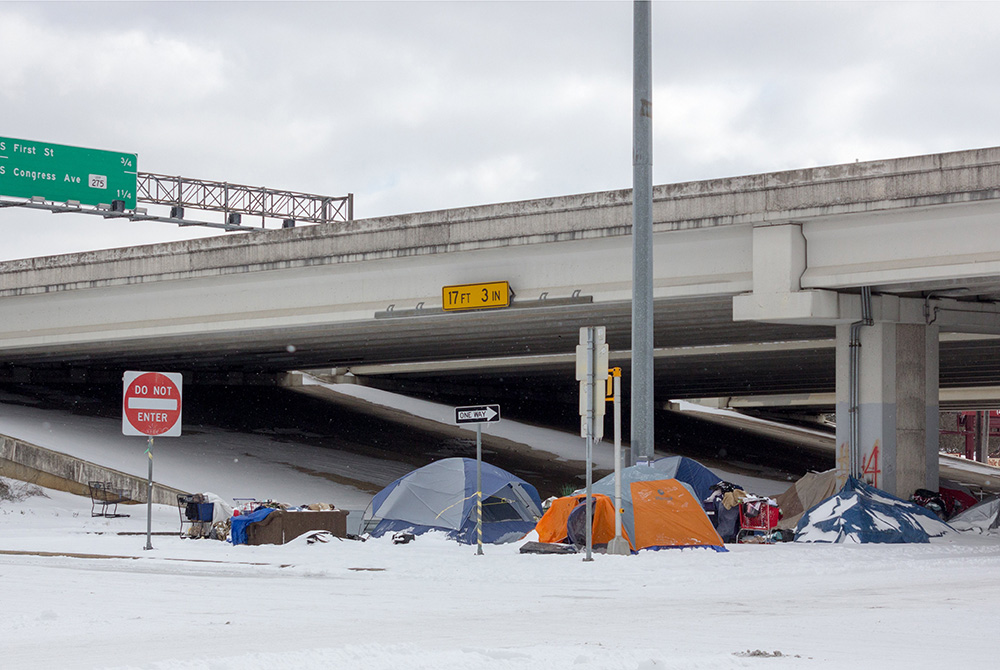 A homeless encampment is pictured under a highway overpass Feb. 16, 2020, during a winter storm in Austin, Texas. Austin planned to operate over a dozen warming shelters around the clock for the city's vulnerable population until the historic cold outbreak ended. (CNS/Isabelle Baldwin)

While snow and ice turned Texas into a winter wonderland, inside homes the February winter storm was devastating, especially in underserved communities, where millions of Texans struggled to survive in freezing temperatures, without power, heat or water.

The current death toll is 58, according to news reports, but that number is likely to increase in the coming weeks. Some people died from accidents driving on icy roads, while at least two died of carbon monoxide poisoning trying to stay warm, and there were 160 reports of other health effects due to potential carbon monoxide exposure, according to Texas health officials.

Then there were those who died of suspected hypothermia, like 11-year-old Cristian Pavon Pineda, who spent Monday Feb. 15 playing outside in snow for the first time in his life. He died in his sleep that night, in freezing cold temperatures in his family's trailer home in Conroe, which had been without power for more than a day.

Cold temperatures swept the entire state, but because of shoddy state infrastructure, the storm impacted households in historically disadvantaged neighborhoods the most. 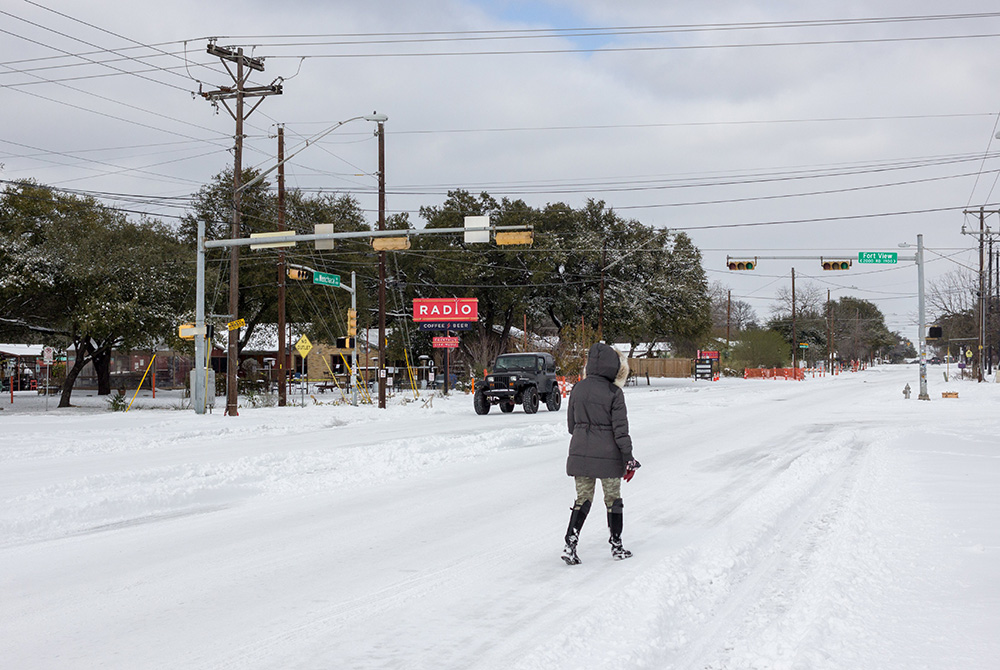 Stranded without power, a resident walks along a snow-covered road Feb. 16 in Austin, Texas. A failed attempt to provide "rotating blackouts" during Texas' historic winter storm left at least nearly 200,000 people without power in single-digits temperatures from the early hours of Feb. 14. (CNS/Isabelle Baldwin)

Carlota García, who lives in Austin, wasn't worried when her power went out at around 2 a.m. on Feb. 15. Like most Texans, García expected the blackout to last a few hours. But her power did not return until Thursday Feb. 18.

García lives with her husband in a condo on the city's east side, where she is on the parish council at Our Lady of Guadalupe Church, a member of its social justice ministry and, before the pandemic, a lector for the Sunday evening Spanish Mass. Through her church, Garcia also volunteers as a strategy team leader with Central Texas Interfaith, a local affiliate of the Industrial Areas Foundation that has been doing relief and advocacy work during and after the storm.

Austin's east side is mostly Black and Latino, a legacy of the city's 1928 Master Plan, in which city officials implemented policies to ensure Austin's segregation. Today, Interstate 35 separates the west side of the city from the east side. There is no hospital or financial or commercial center in East Austin.

"That's why we got hit first with what was supposed to be a rolling outage," García said. 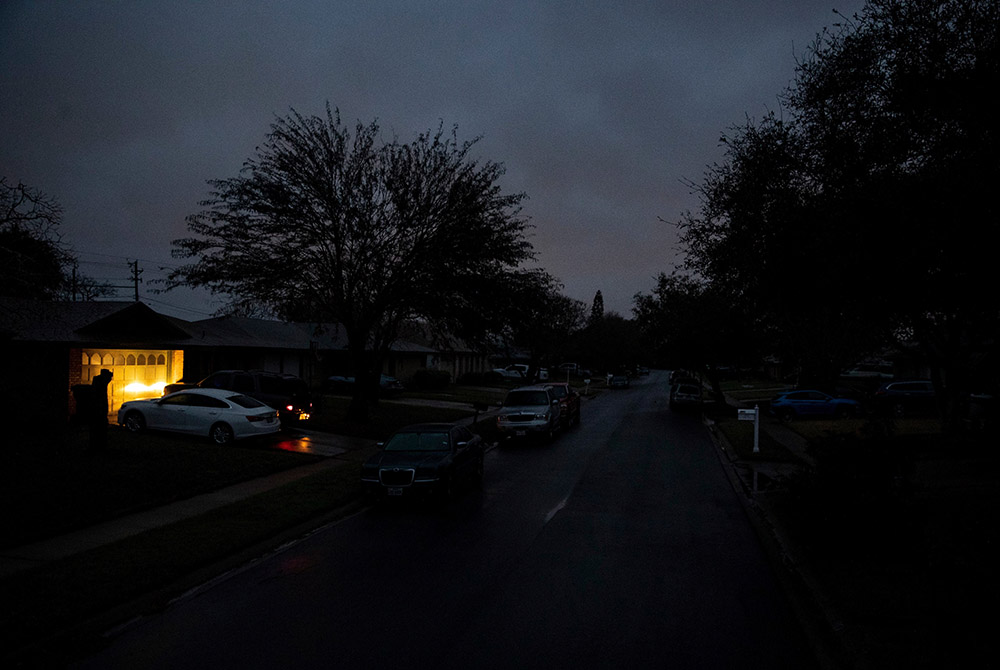 A car in Corpus Christi, Texas, idles Feb. 17 in a neighborhood that has no electricity. (CNS/Courtney Sacco, Caller-Times, USA Today Network via Reuters)

But instead of a few hours without power on a rotating basis, millions of Texans went days without power, and therefore without heat, in freezing temperatures. Lack of power also impacted municipal services, such as water treatment plants. By the end of the week, almost 14 million people, many still without power, were under a water boil notice.

On the morning of Feb. 15, though, García was enjoying the snow day. She thought she would have had power by the time she woke up, but wasn't worried when it was still out from the night before. She directed neighbors looking to charge their phones to walk a mile west, to the other side of I-35 in downtown Austin, where there was still power.

"I fully expected [our] power to return by noon," García said. "That didn't happen."

By Monday evening, García was worried. The temperature was dropping again. Without power, the heater wouldn't turn on. Her stove was electric, so she couldn't warm food. When she stepped into the hall of her fourth-floor condo, she couldn't see in front of her and had to creep slowly down the stairs, gripping the handrail.

García was also worried about her mother, 70-year-old Rocío García, who lived alone in Austin's Colony, a neighborhood outside the city limits to the east. The two women had agreed to turn off their phones to conserve the batteries, periodically checking for text messages, but she hadn't heard from her mother since the morning. 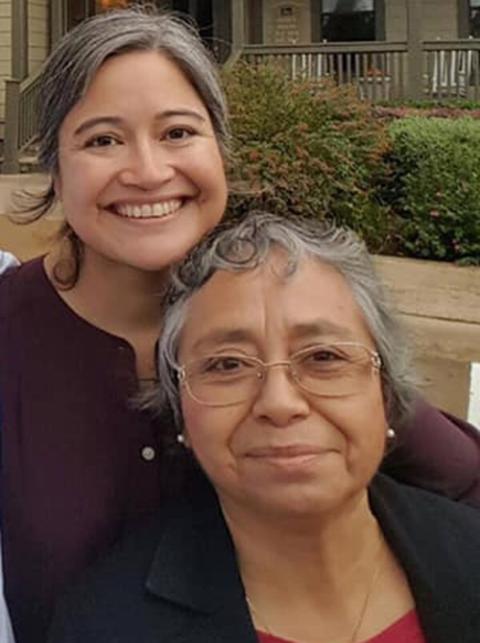 "It had been three or four hours since we last heard from my mom, and my husband told me, 'We need to find a hotel room,' " García said.

Rooms were booked for Monday, but they were able to find a room for both Tuesday and Wednesday nights on the west side of Interstate 35, about a mile from their home.

On Tuesday, they drove to Austin's Colony to pick up García's mother. It was 43 degrees inside, and the elder García was busy identifying which books she would burn next in the fireplace. They took her to the hotel.

From the window of their hotel room, the years of neglect of Austin's east side infrastructure were evident.

"Downtown, west side, it was lit up like a Christmas tree," García said. "That night, we looked out the window and everything was dark in our neighborhood, and then [we could see] all the lights, beautiful on the skyscrapers just there on the other side of the freeway."

Long outages were not limited to East Austin. Communities all over the state, including wealthier ones, experienced dayslong outages. But the impact was harsher, more immediate and more prolonged in underserved communities, especially those of color, where, as in East Austin, decadeslong policies resulted in a lack of investment in infrastructure.

Even when outdoor temperatures rose enough for people to leave their homes safely, they had nowhere to go.

"I was thankful that I could get a hotel room and that $60 a night didn't make a difference," García said. "I know that I am very blessed."

Many residents live in mobile homes that have minimal insulation, García said. They had no way to keep warm, cook food and boil drinking water. 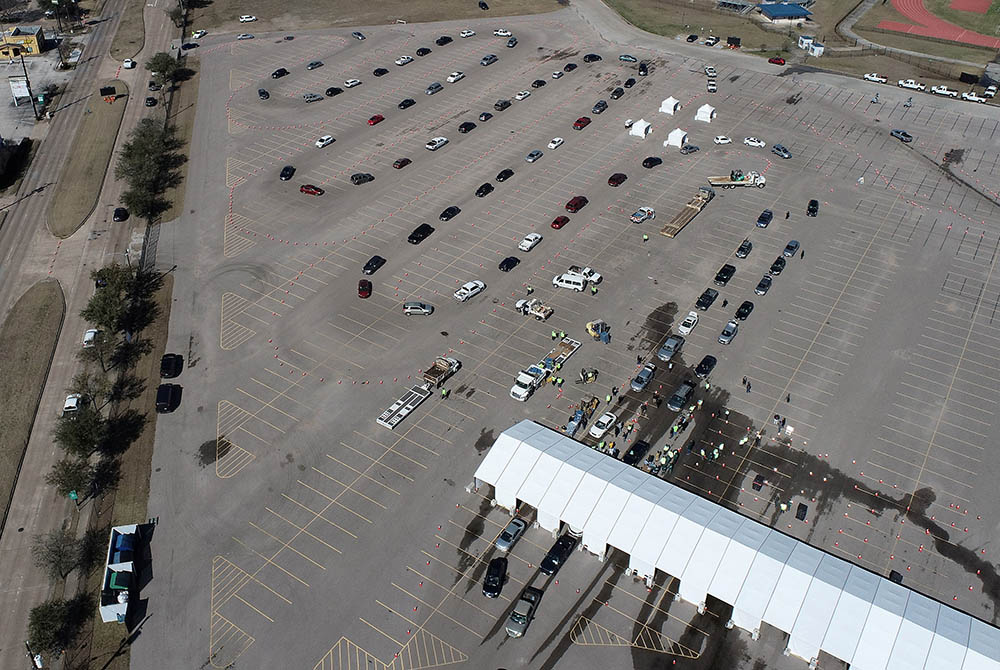 Cars line up to receive free cases of water at Delmar Stadium Feb. 19 in Houston, after the city implemented a boil water advisory following an unprecedented winter storm. (CNS/Drone Base via Reuters)

A week after the storm, over 160 miles away in Houston, Carol Herrera, a retired city employee and volunteer at Catholic Charities, could see the anxiety in people's expressions as they pulled up in the drive-thru food distribution line at Catholic Charities' Guadalupe Center. 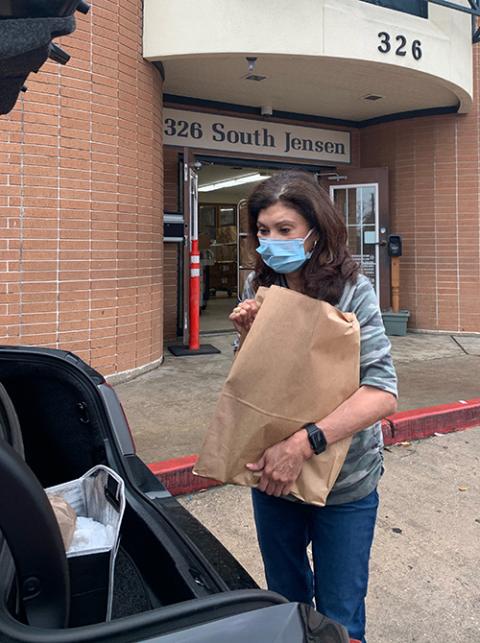 On her first day back at the food bank — Feb. 23, a week after the storm — about 300 cars drove through the pantry line.

"As I put food into people's cars, I could see there was a sense of high anxiety and urgency," Herrera said. "They were waiting for whatever food we could put in their car. I saw that immediately."

The Guadalupe Center's food pantry is located in a mostly Hispanic community in Houston's East End. Many local residents are on fixed incomes and live in large, often multigenerational, households, Herrera said.

When families lost power for multiple days, any food in their refrigerator or freezer probably spoiled.

Some people used outdoor grills indoors, for cooking or to keep warm, which led to accidents and deaths. By the end of the week, though, many people had run out of fuel for outdoor stoves and grills. 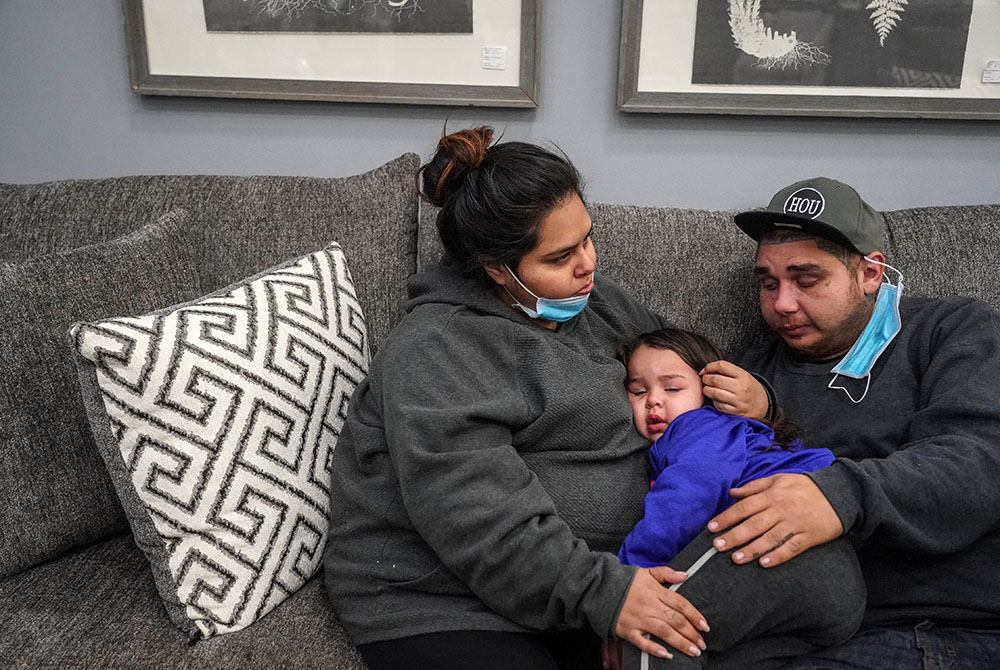 Patrick Youngblood and his wife, Marisol, comfort their daughter Audrey at Gallery Furniture store in Houston, which opened its doors as a warming station Feb. 17, after winter weather caused electricity blackouts throughout the state. (CNS/Go Nakamura, Reuters)

"The people in this community are doing the best they can, and some lost their lives doing it," Herrera said.

Herrera lives alone in North Houston. She didn't lose power or water, and she opened her home to friends and family. With dangerous driving conditions, some family members initially were unable to reach her house. Others had to stay home to deal with emergencies. A pipe burst in her brother's home, and with the power out, he had to burn wood in his fireplace to keep warm, Herrera said.

"I'll be honest, I prayed a lot," Herrera said. "I thought, if I lose power or water, I won't be able to help anybody."

Herrera filled her bathtub, buckets, trash cans and other containers with water to distribute to anyone who might need it.

"My family, my friends, they lost power and water," she said. "Some for days, and some for the entire week."

In communities like those with which García and Herrera work, the struggle is not over. For many Texans, a week without work is a week without pay, devastating for families already living paycheck to paycheck.

Many of these families are turning to their churches, like Our Lady of Guadalupe, or Catholic Charities for food. Those who still don't have water, because of boil advisories or damaged pipes, need water as well.

A week after the storm, Herrera spoke to a person who was still filling the family's septic tank with water manually because of pipe damage.

"They can't afford to get their pipes fixed," she said. "They are going to do a patch-up job. Their first priority is to get food."

García has been fielding calls and texts from worried residents.

One woman confided to García that her father was afraid that applying for government assistance through the Federal Emergency Management Agency, which is under the U.S. Department of Homeland Security, could cause problems if he applies for residency in the future.

García also fears that without proper repairs, community members will face additional problems down the road, such as mold in their homes.

The Texas legislature recently held hearings on the outages and questioned utilities and ERCOT officials. While power returned to most of the state by Feb. 26, about half a million residents were still under a water boil advisory as of March 1, according to the Texas Commission on Environmental Quality.

While García hopes the situation will improve, she is angered by public officials who have voiced support of ERCOT's independence from federal regulation.

"I don't think they saw or experienced what lower-income families and people of color, who are already beaten up by the pandemic, have had to deal with in this particular episode," she said.