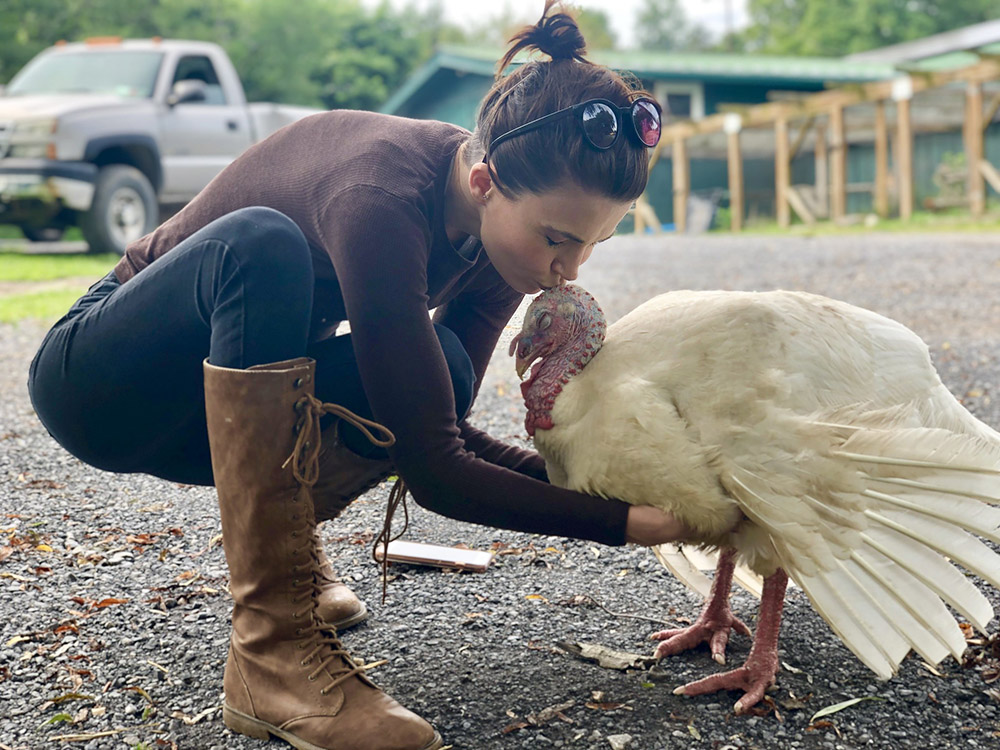 When Catskill Animal Sanctuary founder Kathy Stevens and her team in Saugerties, New York, were organizing one of their big fundraisers, they planned every detail — including live music. Little did they know that one of the resident rescued turkeys, Ethel, was ready to give a performance of her own. A natural music lover, like many turkeys, Ethel spent all day glued to the musician's side, cheerfully clucking and purring along to each tune.

"There are so many things that people don't know about turkeys — including that they are exceptionally musical," said Stevens in a phone interview with EarthBeat.

Ethel's spotlight-stealing moment is one of the countless joyful memories that Stevens, her team and visitors have shared at the sanctuary. In its 21-year history, the organization has provided more than 5,000 animals with a second chance at life, including many turkeys who were destined for terrifying deaths at slaughterhouses before becoming holiday meal entrées. During that time, Stevens has come to know many of the rescue turkeys for the fun-loving, gentle and sensitive individuals they are.

An easy train ride from New York City, Catskill Animal Sanctuary was one of my favorite getaways during my years living in Brooklyn. Connecting with farmed animals reinforced my burgeoning animal-protection instincts, feelings that have strengthened through the years and help me live in closer harmony with my Catholic values of compassion for all and respect for God's creation. 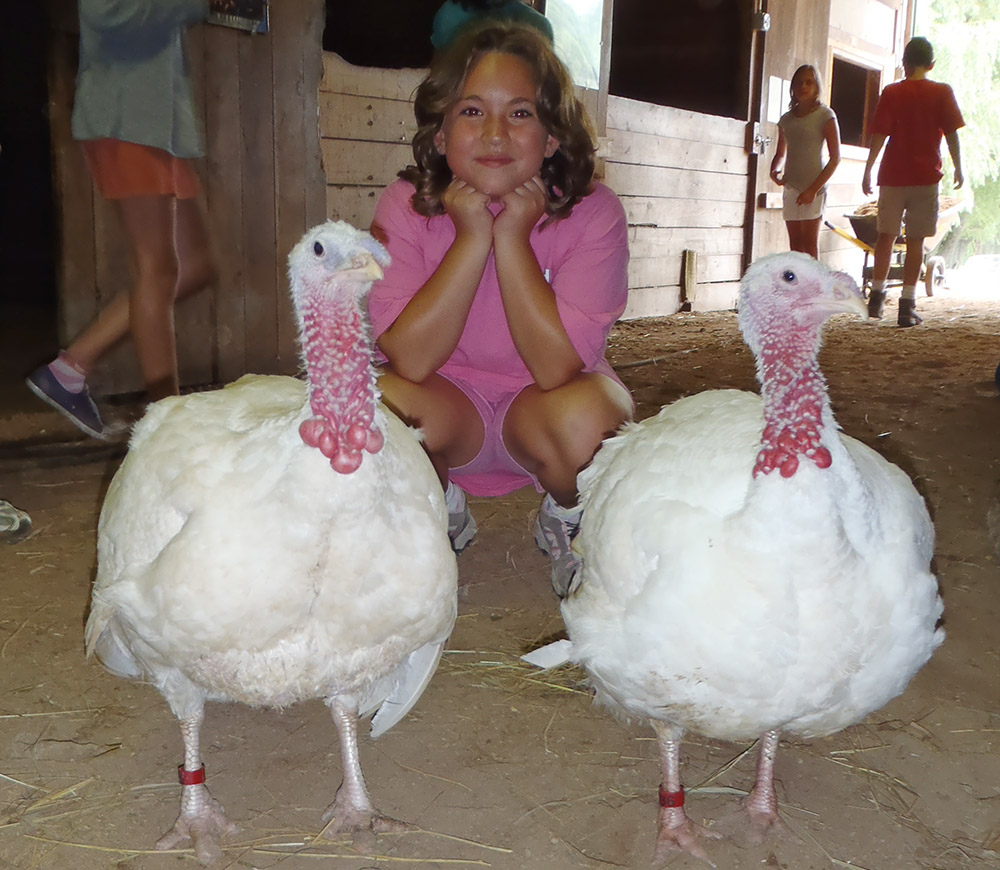 Pope Francis made the importance of these values clear in his encyclical on faith and ecology, "Laudato Si', on Care for Our Common Home." How many of us are really listening to this church teaching when it comes to changing deeply ingrained behaviors? Are we considering that small changes for us could make a world of difference for others?

God's intended connection between humans and other animals is fractured. People love viral videos of animals who leap off trucks on the way to slaughter, but purchase and consume the flesh of those who didn't make an escape.

I, too, once compartmentalized my convictions and behaviors regarding farmed animals. But I reconsidered my choices when I learned how much farmed animals' emotional lives resemble that of my dog Presley's and, in many ways, my own.

Dismissing others' realities prevents the recognition of dignity they so urgently need, and to which we as Catholics are called to be attentive. As Francis wrote in Laudato Si', "Obstructionist attitudes, even on the part of believers, can range from denial of the problem to indifference, nonchalant resignation or blind confidence in technical solutions."

We owe it to animals, ourselves and the future of our planet to consider the pain and suffering we force other animals to endure for our benefit, and we must consider what we can do to prevent their plight. Thanksgiving is a great time to start. 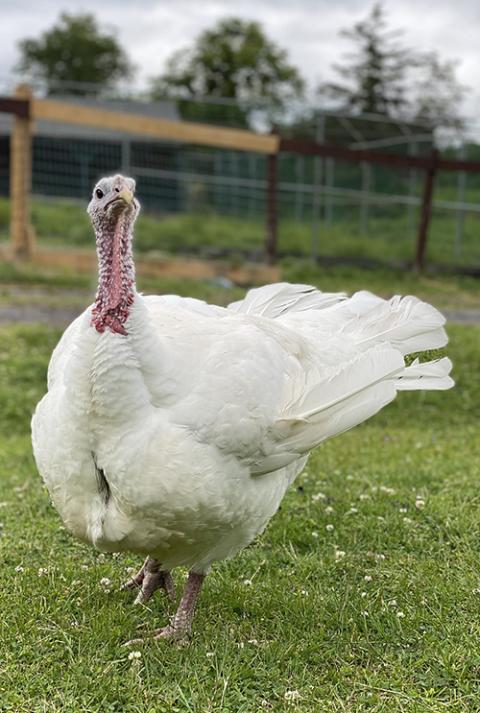 Michael the turkey lived at Catskill Animal Sanctuary in Saugerties, New York for more than seven years. Like so many others, she was a profoundly affectionate bird who proved to all who met her that there is no meaningful difference between the turkeys we consume and the companion animals who share our homes. (Courtesy of Catskill Animal Sanctuary)

Every year, approximately 45 million turkeys are slaughtered for Thanksgiving, according to the U.S. Department of Agriculture. The majority of these turkeys — around 99% of them according to the Sentience Institute — spend their short, miserable lives on factory farms. There, big business plays God.

Birds are genetically manipulated to grow quickly, and as babies their beaks and portions of their toes are routinely and painfully cut off without painkillers because the crowded conditions may cause stress-induced behaviors like feather-pecking, scratching and even cannibalism. After the cruelty they endure during their lives of confinement, they're then granted no mercy at death either.

At just months old, they are hauled to a slaughterhouse, where they're shackled upside down. Stunning is attempted, but not confirmed before their throats are cut and they're defeathered in scalding-hot water. The U.S. Department of Agriculture has estimated that nearly 1 million turkeys and chickens end up being boiled alive every year because fast-moving kill lines fail to slaughter them before they're dumped into defeathering tanks.

If this isn't the kind of ruthless exploitation that Laudato Si' warns against, I cannot imagine what is.

It wasn't always this way. This cruel indifference to animals and insatiable appetite for meat followed the advent of intensive factory farming in the 20th century. Today, catchy and well-funded advertising campaigns invade our homes and encourage constant flesh consumption. Acknowledging animals' intrinsic value or their hellish experiences on factory farms wouldn't be good for business.

And the animals don't suffer alone; our fellow humans also suffer in this industry. A factory farm is a miserable place to work. Due to the long hours, repetitive motions and deadly machines, meat industry workers have some of the highest rates of occupational injury and illness in the country, and likely many injuries go unreported.

The environmental impact of factory farming is also atrocious. Animal agriculture generates huge amounts of greenhouse gases and, according to a 2021 report in the Proceedings of the National Academy of Sciences, is responsible for pollution linked to premature deaths and serious health ailments.

It's also immensely wasteful, using land that could grow healthy, nutritious plant-based foods for humans instead. According to Bloomberg, counting animal pastures and the acres used to produce animal feed, a whopping 41% of U.S. land in the contiguous states is dedicated to farming animals.

Now, consider that at least 9 calories of crops must be fed to an animal for each calorie of meat produced, with certain animals requiring considerably more. In the U.S., if the land currently used for feeding and farming animals were instead dedicated to growing plants for humans to eat, researchers estimate that up to 390 million more people could be fed.

Fortunately, we can chart a new path forward with humane, planet-friendly foods. Vegan alternatives to traditionally animal-based foods are more delicious and abundant today than ever before. The wide variety of plant-based holiday roasts from Field Roast, Tofurky, Gardein and others carried at major grocery stores make it easy to replace cruelty with compassion.

Likewise, veganized home-cooked classics like shepherd's pie, meatless meatloaf and plant-based lasagna are festive and animal-friendly. Or you can even order a premade vegan Thanksgiving meal kit from Purple Carrot, the Herbivorous Butcher or Whole Foods Market.

Most important is to remember whom we honor by making a compassionate, vegan choice — ultimately, God, who calls us to live in harmony with all creation. Each kind decision can benefit others: turkeys, human workers and all the planet's other inhabitants, too.

In Laudato Si', Francis wrote that every act of cruelty toward any creature is contrary to human dignity. Now is the time to reject callous cruelty to turkeys and opt for a creation-friendly holiday.

And even after the holiday decorations have been stowed away, visiting animals like Ethel at Catskill Animal Sanctuary is a wonderful way to connect with creation. To quote Francis' poignant words in Laudato Si', "If we feel intimately united with all that exists, then sobriety and care will well up spontaneously."

By seeking to understand those who suffer, we will begin to build the world we all want to live in, one where every member of God's creation has something to sing about.