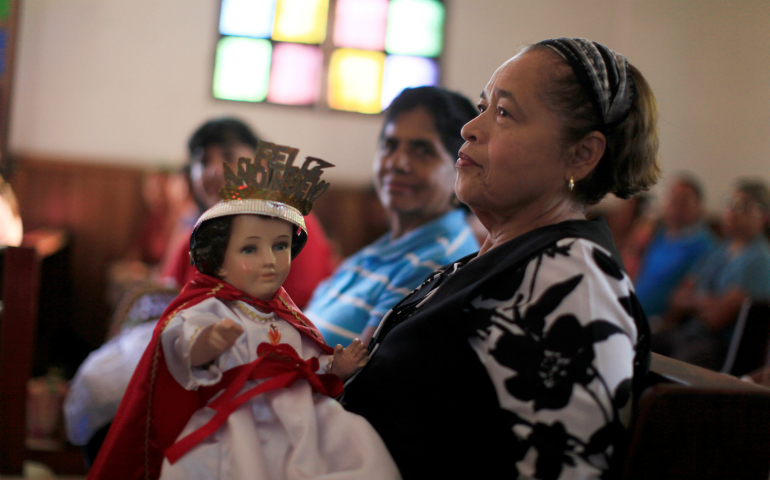 A woman holds a figurine of the Christ Child during a traditional procession celebrating the feast of the Holy Innocents in Antiguo Cuscatlan, El Salvador, Dec. 28, 2016. The event recalls the children massacred in Bethlehem by Herod in his attempt to destroy the child Jesus. (CNS photo/Jose Cabezas, Reuters)

A year ago when presidential candidate Donald Trump said women who seek abortions should face "some form of punishment," conservative politicians and anti-abortion activists were quick to denounce the comment as an erroneous interpretation of the pro-life agenda.

"No pro-lifer would ever want to punish a woman who has chosen an abortion," said Jeanne Mancini, the president of the March for Life Education and Defense Fund. The National Right to Life Committee released a statement noting that it has never supported penalties against women who seek abortions.

Trump would retract his statement, but those who might wonder what legislation supporting such a policy would look like need to look no further than El Salvador today. Under current law, Article 133 of El Salvador's Penal Code, a woman who induces an abortion or consents to someone else to terminate her pregnancy faces two to eight years in prison. In short, women are prosecuted alongside the doctors who perform the procedures.

On Monday, debate began on a proposal to increase that punishment to 30 to 50 years, the highest penalty allowed under Salvadoran law. Under this law, which was introduced in July by Arena party Representative Ricardo Andrés Velásquez Parker, a 13-year-old girl who is raped and seeks an abortion could face 50 years in prison, while her rapist, if even prosecuted, would face a maximum of 10.

Voto Católico El Salvador, a group committed to increasing participation of Salvadoran Catholics in the political sphere, praised Parker and his sentencing proposal, saying, "with this modification of the penal code, El Salvador stands as at the forefront of the most pro-life legislations in the entire world. […] We publicly recognize Deputy Velasquez Parker as a defender of life for the unborn Salvadorans.

Much of the conversation surrounding abortion in El Salvador is polarizing and unproductive. Competing accounts point either to cases of the wrongful imprisonment of women who suffer stillbirths or of women not often being incarcerated for abortion charges but who are instead given secondary measures such as fines. The reality is that the truth is probably somewhere in the middle; wrongful imprisonment due to socioeconomic status is not new to anyone who has studied the death penalty in the United States, and imposing financial secondary measures following prosecution of the mother does not follow the compassion and forgiveness required by the pro-life philosophy or the church's preferential option for the poor. But first and foremost, the law, as it is written criminalizing women, is not pro-life, and this conversation may never progress if neither side is willing to recognize the valid concerns of the other. Human persons, both mother and child, must be the central concern of the pro-life movement in El Salvador.

As students at University of Notre Dame, one of the premiere Catholic university in the world, — one of us being the president of that university's Right to Life Club, which has 1,400 members — we assert that drastically increasing the sentencing of women who have sought abortions is neither pro-life nor affirmative of Catholic values. The use of Catholic morals to justify a law that is not both pro-woman and pro-child is a grand offense to the pro-life philosophy and the social teaching of the church.

Firstly, if El Salvador's mission is to be a pro-life country, then its current laws are truly failing.

Although completely decriminalizing abortion would never serve as a pro-life legal solution, women must be offered immunity, protection, compassion, healing and forgiveness. The pro-life movement has long considered women to be the second victims of abortion and would never promote a measure that would place post-abortive women in prison.

Secondly, any policy that fails to recognize and affirm the dignity of women fails to live up to the message of the church. Pope Francis has not been quiet on this issue; in fact, he declared 2016 an extraordinary Jubilee Year of Mercy with a specific focus on women who have had abortions by granting all priests the discretion to absolve the sin of abortion. In an ever greater gesture of compassion to post-abortive women, the pope extended all priests the power to grant sacramental absolution beyond the Year of Mercy. Without downplaying the seriousness of abortion, he says, "I am well aware of the pressure that has led them to this decision. I know that it is an existential and moral ordeal. I have met so many women who bear in their heart the scar of this agonizing and painful decision. […] The forgiveness of God cannot be denied to one who has repented."

A law that could incarcerate women who seek abortions for 50 years is not reflective of the church's teachings on mercy and forgiveness and only succeeds in eclipsing everything that has been said in light of the Jubilee Year of Mercy. In a country in which the Catholic church wields an enormous amount of political power, the first interaction with government support and services for the vulnerable women targeted by this law should never be incarceration.

Four days after his papal election, Pope Francis said in a homily, "I think — and I say it with humility — that this is the Lord's most powerful message: mercy." Of the most urgent concern, we call on anyone who embraces the pro-life vision, especially Catholics, to practice mercy and encourage the Salvadoran legislation to reject the 50-year sentencing proposal of Deputy Velasquez Parker.

[Aly Cox, Alexis Doyle and Natasha Reifenberg are undergraduates at the University of Notre Dame. Cox is the president of the university's Right to Life Club. Doyle will be studying medical anthropology at Oxford University next year. Reifenberg grew up in Santiago, Chile, and researches abortion policies in Central America.]