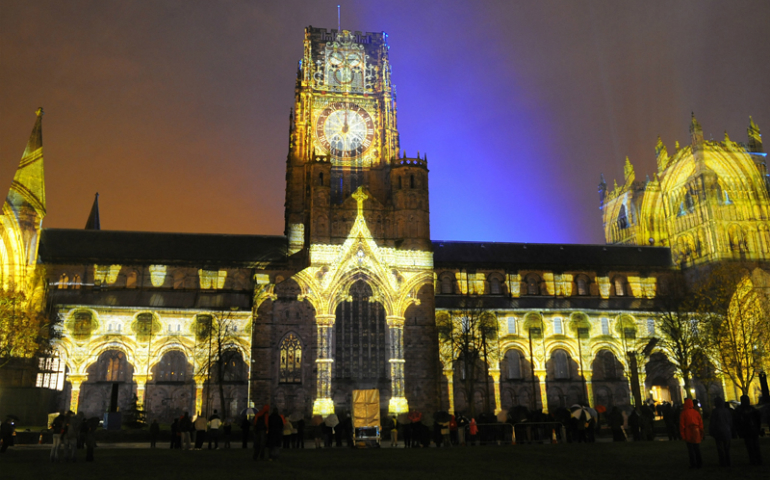 Pages from the Lindisfarne Gospels are projected onto Durham Cathedral in Durham, northern England, on Nov. 12, 2009. (REUTERS/Nigel Roddis)

The future of England’s cathedrals — often described as the crown jewel of the nation’s architectural heritage — will be examined by a special Church of England working group following a series of disastrous financial crises for the churches.

The archbishops of Canterbury and York, Justin Welby and John Sentamu, ordered the review in the wake of crises that have included layoffs, debts, and the sale of assets. On April 10, the 12 members of  the group were announced, including its chair, Bishop of Stepney Adrian Newman, and Dean of York Vivienne Faull, who will serve as vice chair.

The group will study how cathedrals are governed, their accountability, and how decisions about finances are made.

Most of the 42 Anglican cathedrals were built in the Middle Ages as Catholic churches, and were taken over by the fledgling Church of England following the English Reformation when Henry VIII ordered the dissolution of monasteries. It is the maintenance and repair of these ancient buildings that is causing much of the cathedrals’ financial problems today.

The review group was created following a recent report on the financial crisis at Peterborough Cathedral, a 12th-century former Benedictine abbey in the Midlands that houses the tomb of Queen Katherine of Aragon. Recently, the dean of the cathedral resigned and 12 other staffers were laid off.

A study by its bishop, Donald Allister, warned that the situation there was so grave that it posed “serious risks to the reputation of the whole Church (of England).”

Allister warned that despite compliance with the “Cathedral Measures,” a document governing cathedrals drawn up in 1999, Peterborough was in trouble, suggesting the 18-year-old document is “clearly insufficient to prevent the problems that occurred.”

Another distinguished cathedral in financial difficulty is Durham, founded in the 11th century in northeast England and the location of the shrine of St. Cuthbert.

At Exeter, a cathedral in southwest England with the longest vaulted ceiling in the world, there is a predicted deficit of 175,000 pounds (or $217,000), after a failed and costly plan to restore the Roman baths on the site. There has also been talk of staff reductions and the dean is expected to retire.

Even Guildford, a postwar cathedral near London, is struggling, following a major renovation and the removal of asbestos. Plans to secure an endowment fund by developing its land for housing were rejected by a local council.

“The buildings themselves are a huge problem,” said Newman, chair of the working group. “It is possible to see a cathedral as an albatross but they are also our best assets.”

Despite these problems England’s cathedrals still attract large crowds and millions of tourists a year. Around 55,000 people are expected to attend Easter Sunday services.

Nine of the cathedrals have turned to entrance fees to help finance their buildings, on top of grants from the main Church of England funding body and other fundraising grants and events. The rest are averse to charging tourists and are looking to alternatives, such as more visitor attractions and museum displays.

A temporary government fund to mark the centenary of World War I helped provide 40 million pounds ($49 million) over two years for repairs.

Faull, the working group vice chair, said deans will be lobbying the government for a similar fund.

“The World War I fund was a godsend,” she said. “Major building works and urgent repairs are the shocks that can cause the financial problems, especially for the smaller cathedrals.”