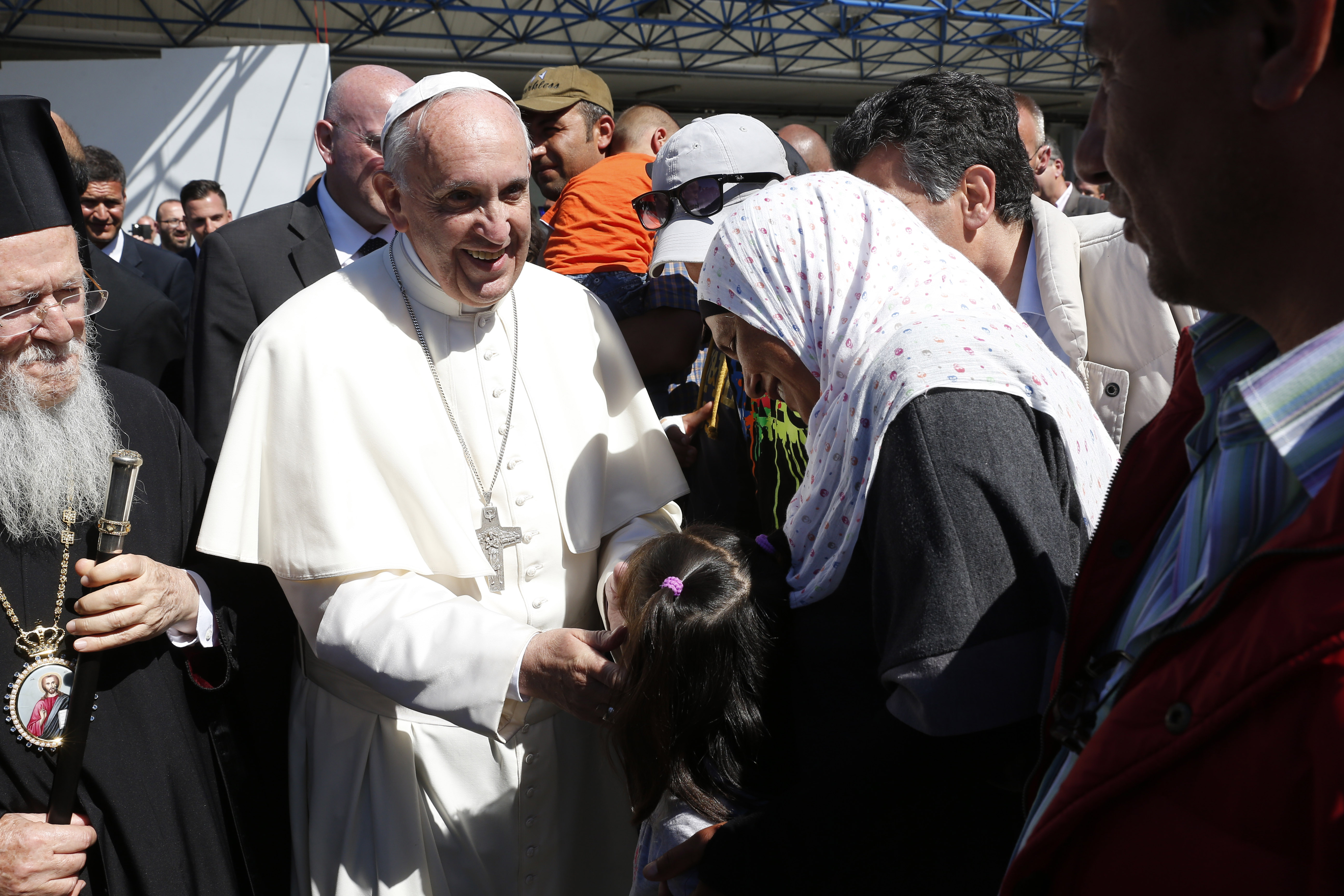 Pope Francis greets refugees who are traveling to Rome with him at the international airport in Mytilene on the island of Lesbos, Greece, April 16, 2016. The pope brought 12 refugees to Italy on his plane. (CNS/Paul Haring)

In what appears to be an unprecedented political and humanitarian gesture, Pope Francis has brought twelve refugees from Syria back to the Vatican after a visit Saturday to Lesbos.

The refugees were seen boarding the papal flight at the end of the pope's five hour visit to the Greek island, which has become a waypoint for hundreds of thousands of refugees escaping violence across the Middle East.

The Vatican said in a statement that the pontiff wanted to "make a gesture of welcome." The twelve refugees comprise three families, all of whom are Muslim and from Syria.

The Vatican said the initiative was carried forward after discussions with Greek and Italian authorities and that the city-state "will take responsibility for bringing in and maintaining the three families."

In a press conference aboard the papal plane back to Rome, Francis said the decision to bring the families back was "purely a humanitarian gesture."

"I saw that it was the spirit that spoke," said Francis.

The pope said that the refugees were brought in accordance with all international rules and that each of the families had appropriate visa documents and had the permission of the Vatican's government, the Italian government and the Greek government.

"They are guests of the Vatican," said Francis, adding that the families will initially be supported by the international Sant'Egidio Community.

Later in the flight, the pontiff quoted Mother Teresa of Calcutta in describing the move. Teresa, he said, called her work like "a drop of water in the sea."

"But after this drop the sea will not be the same," the pope quoted.

"It is a small gesture," said Francis. "It is these small gestures that all men and women must do to take into hand whoever has need."

The pope also spoke on the papal plane about wider questions of migration into Europe. He noted at one point that some who commit terrorist acts on the continent "are children and grandchildren of Europe."

"What has happened?" the pontiff asked. "There has not been a policy of integration. This is fundamental for me."

"Today, Europe must retake this capacity that it has always had of integration," said Francis. "The Normans, all these people arrived in Europe, and they integrated them and they enriched the culture. I believe that we need an education in integration."

The pope also said he understood why some people fear migration.

"I understand governments, and populations, that have a certain fear," said Francis. "I understand this. We must have a great responsibility in the welcoming."

"I have always said building walls is not a solution," said the pope. "They don't resolve anything. We have to make bridges. But bridges should be made intelligently, with dialogue, with integration."

"I understand a certain fear," he continued. "But closing the borders doesn't solve anything. Because that closing [them] in the long run does bad to our own people."

"Europe must urgently make policies of welcoming, integration, growth of work, economic reform," said Francis. "All these things are bridges that will bring us to not make walls. The fear has all of my comprehension."