Skip to main content
Vatican
This story appears in the Francis in Armenia feature series. View the full series. 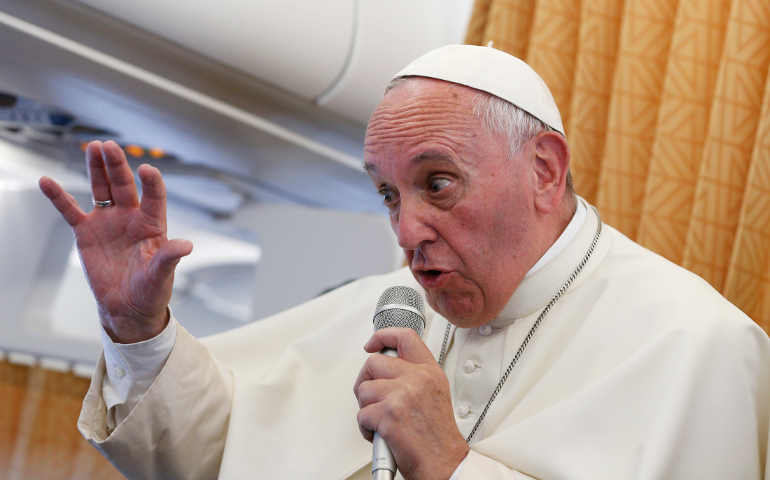 The Catholic church and other Christian communities must apologize to gay people and to many groups they have let down or offended throughout history, Pope Francis has said.

In a press conference Sunday on the flight back to Rome after his weekend trip to Armenia, the pontiff said bluntly: "The church must say it's sorry for not having comported itself well many times, many times."

"When I say the church: Christians," Francis clarified. "The church is holy. We are the sinners."

The pope was responding to a question about remarks German Cardinal Reinhard Marx made last week that the Catholic church should apologize to the gay community for marginalizing them.

"I will repeat the same thing I said on the first trip," Francis said today, referencing the press conference he held on a return flight from Rio de Janeiro, Brazil, in 2013. "I will also repeat what the Catechism of the Catholic Church says: that [gay people] should not be discriminated against, that they have to be respected, pastorally accompanied."

"The matter is a person that has that condition [and] that has good will because they search for God," said the pontiff.

"Who are we to judge them?" he asked, reframing his famous phrase from 2013 into the plural. "We must accompany well -- what the Catechism says. The Catechism is clear."

Francis also said that the culture in which he grew up in Argentina many years ago was a "closed Catholic culture," giving the example of how it was looked down upon to even enter the home of a couple who had been married civilly after one of the partners had previously divorced.

"The culture has changed -- and thank God!" the pope exclaimed. "Christians; we must say we are sorry many times; not only on this."

"This is the life of the church," said the pontiff. "We are all saints because we all have the Holy Spirit inside us. But we are also all sinners."

The pope's words about apologizing to those the church has let down were part of a nearly hour-long press conference that focused on a wide array of issues.

Topics included: Francis' decision to create a commission to study the possibility of ordaining women as deacons in the Catholic church, whether the pope might consider removing the excommunication of Protestant reformation leader Martin Luther, and his decision to continue to label the World War I-era killings of 1.5 Armenians as a genocide.

On women deacons, the pontiff was asked whether he had yet acted to create a commission to study the matter. As NCR first reported, Francis said he would create such a group during a meeting in May with the International Union of Superiors General (UISG), the umbrella organization of global Catholic women religious.

Francis first criticized the media coverage that decision received, mimicking headlines the next day that read: "The church opens the door to women deacons."

"Really?" the pope asked aloud. "I was a bit angry with the media because this is not saying the truth of the thing to the people."

Francis said the women religious had asked him only to study the matter. "Nothing more was asked," he said.

The pope said that after the meeting he asked both Cardinal Gerhard Muller, the prefect of the Vatican's Congregation for the Doctrine of the Faith, and Sr. Carmen Sammut, the UISG president, to make a list of people he might consider for the group.

The cardinal and sister responded with names and "now, it is still on my desk to make this commission," said the pontiff.

"I believe we have studied this theme a lot in the 1980s and it will not be difficult to put light on this topic," he continued, mentioning a study the International Theological Commission did some decades ago.

Francis was asked about Martin Luther, and the possibility of removing his excommunication, in relation to the pope's upcoming October trip to Sweden for the commemoration of the 500th anniversary of the Reformation.

"I believe the intentions of Martin Luther were not wrong," the pontiff responded. "He was a reformer."

"Maybe some methods were not the right ones," the pope continued. "But in that time ... the church was not really a model to imitate. There was corruption in the church. There was worldliness; there was attachment to money, power."

"We have to put it into the story of that time," he cautioned. "It is a story that is not easy to understand; not easy."

After 500 years, Francis said, it's time to "take up again the path of meeting each other," adding that Lutherans and Catholics must pray and work together.

"This is a very long path," the pontiff said. "One time I said I know when the day of full unity will come: the day after the coming of the Son of Man."

"You do not know," he continued. "The Holy Spirit will give the grace. In the meantime: pray, love each other, and work together, most of all for the poor and for the people that suffer."

Francis was asked at the beginning of the press conference why he had chosen to revise a prepared text on his first day in Armenia to refer to the historic killings, undertaken starting in 1915 by the Ottoman Empire, as a genocide.

The pope had previously used the term in a 2015 Mass at the Vatican that drew protest from Turkey, Armenia's eastern neighbor. Turkey, the successor state to the Ottomans, claims the word genocide does not accurately describe the killings.

Francis said Sunday he added the word to his text after hearing Armenian President Serzh Sargsyan use it when he spoke in remarks before the pontiff's.

"After having heard the tone of the president's discourse and with my past with this word -- I have said this word publicly last year at St. Peter's -- it would have sounded very strange to not at least say the same," said the pope.

"I wanted to underline another thing," the pontiff continued: "In this genocide ... the great international powers looked away."

Francis was in Armenia Friday-Sunday on his fourteenth trip outside Italy as pontiff.

While there he met with the country's president, attended a Divine Liturgy of the Oriental Orthodox Armenian Apostolic church, and issue a common declaration with their leader, Catholicos Karekin II.