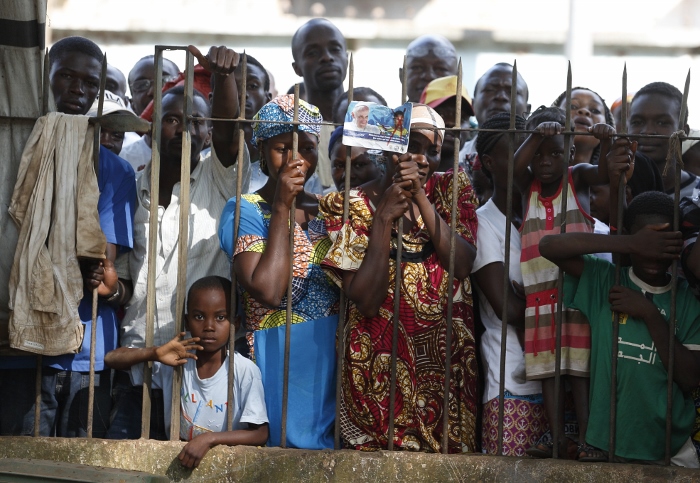 Pope Francis concluded his breakneck six-day, three-country tour of Africa Monday with a forceful and stirring call for Christian-Muslim unity against religious violence in this war-torn country and by urging Catholics to be “artisans of peace” who renounce vengeance for past wrongs.

In two events marked again by extraordinary levels of security -- with uniformed United Nations soldiers carrying rifles, tanks with mounted machine guns, and security guards in flak jackets and riot gear -- the pontiff poignantly cried against all forms of conflict.

Speaking first in an inter-religious meeting with some 200 Muslims at a Bangui’s central mosque, located in an area of the city known for frequent violent inter-religious clashes, Francis exhorted: “Christians and Muslims are brothers and sisters!”

“We must therefore consider ourselves and conduct ourselves as such!” he told some 200 Muslim men at the meeting, sitting cross-legged before him. “Those who claim to believe in God must also be men and women of peace!”

“Together, we must say no to hatred, to revenge and to violence, particularly that violence which is perpetrated in the name of a religion or of God himself -- God is peace, salam,” he said, using the Arabic word for peace.

Later, in an open-air Mass with about 30,000 Catholics at Bangui’s rundown and simple sports stadium, Francis told Central African Christians they are called to be “artisans of the human and spiritual renewal of your country.”

The events -- the last in the pontiff’s Nov. 25-30 tour of Kenya, Uganda, and this country -- were part of an incredibly determined push by the pontiff to show the possibility of Muslim-Christian coexistence, even amidst a past of horrific violence.

The visit to the Koudoukou mosque in particular sent a crystal clear signal of his desire for people to work for peace. The neighborhood around the building is considered one of the most dangerous in Bangui and is even surrounded by what is considered a “no man’s land” by UN forces, afraid of entering in fear of harm or death.

Francis drove into and out of the neighborhood Monday in an open-air pope-mobile, greeting crowds lining streets amid an uncountable number of UN soldiers wearing their trademark blue hats and blocking any traffic in the area. Rifled soldiers were also posted at the top of the mosque’s minarets, gazing over the crowd.

The Mass at Bangui’s sports stadium was surely among the most tense and militarized in modern papal history. Police in riot gear, with helmets and long riot shields, formed a ring along the outside track of the stadium below bleachers holding crowds. Pick-up trucks carrying uniformed and rifled soldiers in the back drove among the people, looking over those present.

Some people entered the Mass by rushing past guards as they opened gates around the stadium intermittently to admit UN and other accredited vehicles. As people ran, they were screaming in excitement. Many wore native clothing decorated with the pope’s image.

In his remarks at the mosque, Francis mentioned upcoming national elections in the Central African Republic in December, expressing hope that the leaders who are elected may be “symbols of national unity rather than merely representatives of one or another faction.”

“I strongly urge you to make your country a welcoming home for all its children, regardless of their ethnic origin, political affiliation or religious confession,” he said. “The Central African Republic, situated in the heart of Africa, with the cooperation of all her sons and daughters, will then prove a stimulus in this regard to the entire continent.”

Francis was greeted at the mosque Monday by several imams, one of whom welcomed him “in the name of the God of mercy.” Before the pope spoke, the Muslims offered a prayer in Arabic. The pontiff bowed his head during the moment.

The pope also asked an imam at the end of the meeting to show him the Mirab, the small decoration inside mosques that shows Muslims the direction of Mecca. Francis and the imam stood silently before the Mirab for several moments.

Leaving the Mosque, Francis visited a school across the street that teaches both Muslim and Christian students. He also stopped by a small refugee camp, which houses some of the 447,500 people the UN says have been internally displaced in the country due to the continuing conflicts.

In his homily at the Mass, Francis reflected on a passage in Matthew’s Gospel in which Jesus calls the fishermen St. Peter and Andrew, telling them they would be from then on “fishers of men.”

Near the end of his remarks, he asked: “Dear Central Africans, may you look to the future and, strengthened by the distance you have already come, resolutely determine to begin a new chapter in the Christian history of your country, to set out towards new horizons, to put out into the deep.”

“Christians of Central Africa, each of you is called to be, through perseverance in faith and missionary commitment, artisans of the human and spiritual renewal of your country,” he said.

Security in the Central African Republic has largely been provided since 2014 by a some-10,000-strong United Nations force.

President Catherine Samba-Panza is leading a temporary government that is supposed to facilitate new elections for a permanent government in December. In a potential sign of hope, all of the presidential candidates met for the first time Saturday to issue a joint statement welcoming the pontiff to their country.

The current political situation in the country stems from the 2013 seizure of Bangui by a largely Muslims anti-government rebel group known as Seleka. They have been opposed by a largely Christian militia known as the anti-Balaka.

Earlier in the Central African Republic on Sunday, Francis met with the head of the country’s transition government, visited a camp of internally displaced persons, and celebrated Mass with the priests and religious at Bangui’s cathedral.

During his visit to the cathedral, Francis made a special sign of reconciliation by opening a holy door there for the upcoming Jubilee Year of Mercy.

It was the first time in the centuries of celebration of Jubilee years that a pontiff opened a holy door in any city other than Rome, and he did so a full eight days before the official start of the year of mercy on Dec. 8.

“Today, Bangui becomes the spiritual capital of the world,” the pontiff told those gathered outside the cathedral to watch him open the door.

“The Holy Year of Mercy comes early to this land, a land that has suffered for many years,” he said, before pushing the door open with both hands and walking through slowly before pausing in the newly open threshold.

Francis is to return to Rome on mid-day Monday, following a formal departure ceremony at Bangui’s airport.