Skip to main content
Vatican
This story appears in the Francis in Mexico feature series. View the full series. 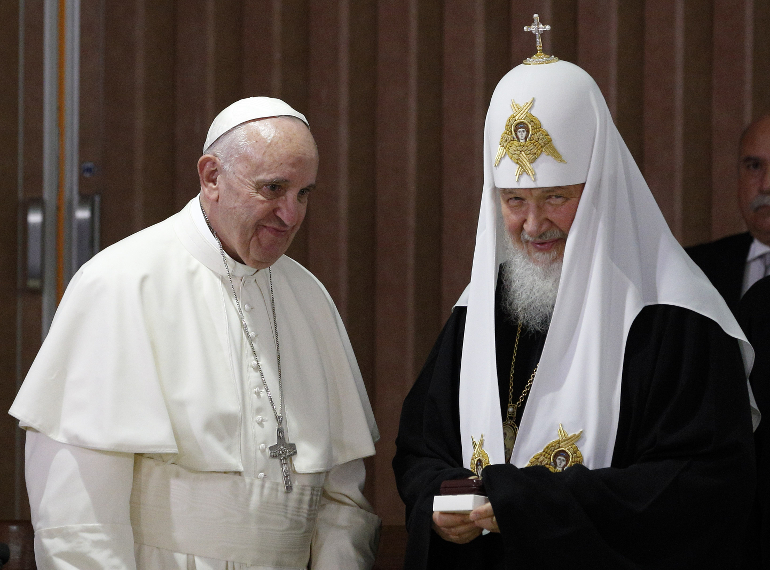 The Roman Catholic pontiff and the Russian Orthodox patriarch have met for the first time in history, putting aside centuries of separation for at once symbolic and significant talks reportedly focused on the needs of Christians facing persecution globally.

And, traveling half the globe for an encounter in the backdrop of this officially secular island nation, they greeted each other Friday not as strangers but long-lost brethren.

Entering separately into a small, sparse room at Havana's Jose Marti airport, they made a long embrace, holding each other's arms in a fraternal hug. As Francis saw Kirill for the first time in person, he said softly: "Finally."

Speaking in Spanish, the pontiff told the patriarch: "We are brothers." The patriarch later responded, in Russian: "Now things are easier." And the pope: "It is more clear that this is the will of God."

The meeting, the result of decades of attempts, takes advantage of Francis' previously planned six-day visit to Mexico and Kirill's 11-day visit to Cuba, Brazil, and Paraguay.

While meetings between Catholic and Orthodox leaders have become commonplace in recent years, particularly between popes and the Istanbul-based Ecumenical Patriarchate, efforts since the fall of the Soviet Union to arrange a meeting with the Russian Orthodox had persistently failed.

Now, Francis and Kirill are scheduled to meet for 135 minutes Friday afternoon. The talks are private, but they are expected to sign a joint declaration afterwards in the names of both their churches that may give signs to how they foresee building their relationship in years to come.

Two experts in relations between the Orthodox and Catholic churches contacted in anticipation of Francis and Kirill's meeting said it could be a sign of more historic moments to come in the wider integration of the Christian traditions.

"We can be hopeful that it will mark the beginning of a new stage in relations" between the churches, said Paulist Fr. Ronald Roberson, associate director of the U.S. bishops' Secretariat for Ecumenical and Interreligious Affairs.

In a brief photo opportunity at the beginning of their talks Friday, both the pope and the patriarch sat forward in their chairs as they spoke to one another. Each seemed comfortable with the other, smiling and nodding in agreement.

Behind them was a simple crucifix, made in an iconic style.

Unlike the Roman Catholic church -- which is organized as one entity led by the pope -- the global Orthodox churches are organized into a communion led by various patriarchs or archbishops around the world. The Ecumenical Patriarchate, currently led by Bartholomew, acts as the "first among equals" of the churches.

The Russian Orthodox church is the largest of the churches, with its membership totally about two-thirds of the entire Orthodox communion.

Friday's visit marks Francis' second trip to Cuba within just a five-month period. The pontiff visited the country Sept. 19-22 before following on to the U.S.

The choice of the island for the historic encounter notably fulfills a role the pope had asked the country to perform during his earlier visit, telling its political leaders then that the nation has a "key" value of linking together both north and south, east and west.

Friday's talks were hosted by Cuban President Raul Castro, who greeted the pontiff on arrival at the airport and is to accompany both Christian leaders for the signing of the agreement.

Jesuit Fr. Robert Taft, a U.S. Jesuit priest of the Byzantine-Slavonic rite and longtime professor at the Pontifical Oriental Institute in Rome, called the meeting between Kirill and Francis "really extraordinary."

Taft, who met Kirill several times in Rome and in the U.S. before he was elected patriarch, said the Russian's 2009 election to his role and Francis' 2013 election to his brought "new players and a new field of play" to discussions between the churches.

The Jesuit cited particularly an address Francis gave to Ecumenical Patriarch Bartholomew during a visit to Turkey in 2014. In that speech, the pontiff said that the Catholic church "does not intend to impose any conditions except that of the shared profession of faith" for Christian unity.

"That's the most extraordinary thing in the world," said Taft. "This is just totally new stuff."

Francis will travel Friday afternoon directly from Havana to Mexico City, where he begins a six-day, six-city tour of the country.

While the pope will spend each night of his visit in the central capital city, he will crisscross the nation via airplane or helicopter each day to visit points further south, west, and north.

Besides a brief welcoming ceremony at Mexico City's Benito Juarez airport upon his arrival Friday evening, the pontiff has no other scheduled events on his calendar for the day.

On Saturday, Francis will meet with Mexican President Enrique Peña Nieto and the country's bishops before celebrating a Mass at the Basilica of Our Lady of Guadalupe.

He will fly via helicopter Sunday to an area just north of the capital, where he will celebrate a public Mass and visit a children's hospital.

The pontiff will then visit two cities in the state of Chiapas, on the Mexican-Guatemala border, Monday. On Tuesday, he will visit Morelia, a city some 200 miles west of the capital that has been racked by drug violence. He will end his Mexican journey Wednesday in Ciudad Juarez, the border city on the other side of El Paso, Texas.