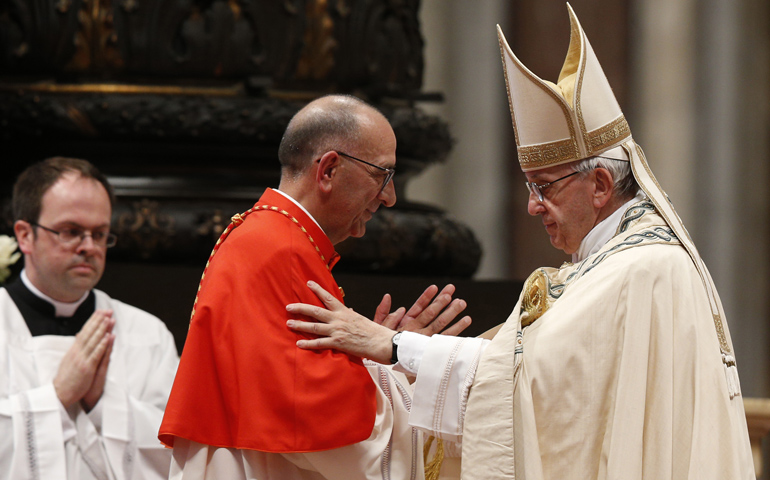 Pope Francis has told the world's Catholic cardinals not to seek privilege but to look at the situations Catholics in their care are facing today and to serve them as brothers and sisters.

Speaking during a formal ceremony in St. Peter's Basilica marking the creation of five new cardinals, the pope told the prelates that God is calling them "to look at reality, not to let yourselves be distracted by other interests or prospects."

The pope said God wants the cardinals not to be "princes of the church" but to "serve like him and with him … [and] to face as he did the sin of the world and its effects on today's humanity."

Francis was speaking Wednesday in a homily in St. Peter's Basilica during what is formally known as a consistory, a high ceremony marking the creation of new cardinals by the pope. The pope's remarks for the occasion were unusually short, presenting just a brief reflection on a Gospel reading.

The most unusual of the appointments is that of San Salvador Auxiliary Bishop Jose Gregorio Rosa Chávez, who is believed to be the first auxiliary bishop to have been made a cardinal in at least the modern era.

Rosa Chávez, who has been in his role since 1982, is known to have worked closely with slain Salvadoran Archbishop Oscar Romero.

New Swedish Cardinal Anders Arborelius told NCR in an interview June 28 he thinks cardinals are tasked most with giving the pope encouragement and offering to help in any way he needs for his leadership of the global church.

"I think he needs a lot of encouragement because we know there are critical voices everywhere," said Arborelius, Sweden's first cardinal.

"It's very important that we as cardinals say, 'We believe that you are the vicar of Christ, you have received the gift of the Spirit in order to lead the church. We are also willing to help you. What do you want of us?' " he said.

The pope reflected in his homily on a reading from Mark's Gospel in which Jesus explains to the apostles what will happen to him when he is handed over and put to death. Two of the apostles, James and John, ask Jesus that they be allowed to sit at his left and right hand in Heaven.

Francis emphasized in his homily that according to Mark's account Jesus walked in front of the disciples as they went to Jerusalem together. Of the two apostles who argue about their place in Heaven, Francis said: "They are not facing reality!"

"The reality is completely different," said the pope. "It is what Jesus sees and what directs his steps. The reality is the cross. It is the sin of the world that he came to take upon himself, and to uproot from the world of men and women."

Giving some examples of that reality today, Francis said: "It is the innocent who suffer and die as victims of war and terrorism; the forms of enslavement that continue to violate human dignity even in the age of human rights; the refugee camps which at times seem more like a hell than a purgatory; the systematic discarding of all that is no longer useful, people included."

The ceremony marking the creation of the cardinals saw each of the prelates being named formally to receive his cardinals ring and red hat, known as a biretta, from Francis before St. Peter's high altar.

Each cardinal was then named an honorary leader of a parish church in Rome, from which is traced the cardinal's role in helping elect the pope. From those posts, the cardinals are considered the clergy of Rome, who then elect their bishop, the pope.

The ceremony was marked by one unannounced change in the program of the event. While the Vatican had said the ceremony would begin with an address to Francis on behalf of the new cardinals by Mali Archbishop Jean Zerbo, Spanish Archbishop Juan Omella made the address instead.

Zerbo, who topped the list of the five new cardinals as announced by Francis May 21, has faced questioning about Swiss bank accounts owned by the Mali bishops' conference reported to contain about 12 million euros.

Omella told Francis on behalf of the new cardinals that they do not want a "self-referential church" but a church that is "a pilgrim on the streets of the world … drying the tears of many and lifting their hope."

Cardinals are able to vote in a conclave upon the death or resignation of the pope until they reach the age of 80. There are now 121 such cardinals. Francis has named 49 of that number. Fifty-three of the remaining cardinal electors were named by Pope Benedict XVI, 19 by Pope John Paul II.

Seven current cardinal electors will reach the age of 80 in 2018, beginning Feb. 18 with Cardinal Antonio Veglio, the former head of the now defunct Pontifical Council for the Pastoral Care of Migrants and Itinerant People.

At the end of the June 28 ceremony, Francis and the new cardinals were to visit Benedict at the Vatican monastery where he lives.

A version of this story appeared in the July 14-27, 2017 print issue under the headline: Look at people's reality, Francis tells new cardinals.