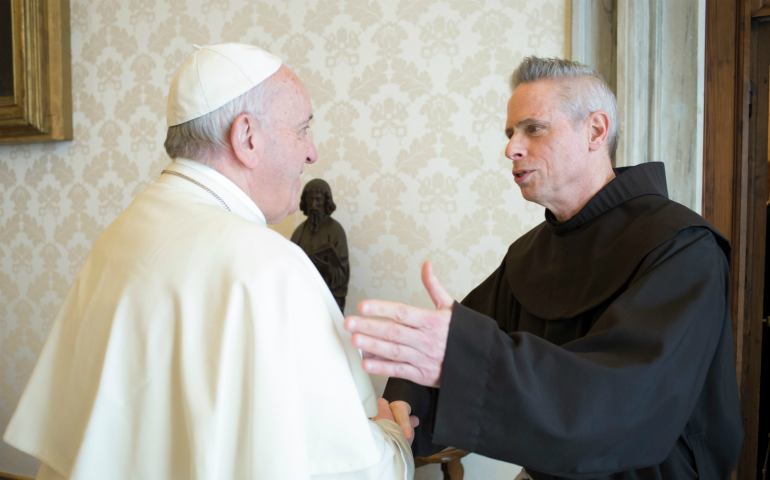 Pope Francis greets Father Michael Perry, minister general of the Order of Friars Minor, during a meeting with the superiors of the four main men’s branches of the Franciscan family at the Vatican April 10. (CNS/L'Osservatore Romano)

For St. Francis of Assisi, following Christ meant imitating his humility and forsaking riches, power and status; the men who call themselves Franciscans today believe they are called to embrace the same attitudes, including in their governance.

In early April, the ministers general of four men's branches of the Franciscan family — the Friars Minor, Capuchins, Conventual Franciscans and the Third Order Regulars — asked Pope Francis to give the Franciscans the "privilege" of allowing religious brothers to be elected to leadership positions, including those with authority over ordained priests.

The word "privilege" means special permission for something not generally envisioned by church law. In canon law, governance in the church usually is tied to ordination.

The Franciscans' request is about recovering the notion of fraternity and service St. Francis gave his first companions, said Father Michael Perry, minister general of the Friars Minor. But it also has implications for leadership, authority and governance in the wider church.

At its root, it raises the question: "Is leadership about organizing things in such a way that one has absolute control over everything? Or is leadership about empowering people so that there's a synergy, a bringing together of all the strengths within a community?" Perry told Catholic News Service.

The core identity of ordained ministry is involved as well.

Because of its unique connection to the Eucharist, the ministerial priesthood has a special and irreplaceable role within the Catholic Church and within a Catholic religious community, Perry said. The Franciscans' request "is not a question of challenging spiritual authority or the role of the shepherd; it's actually about liberating the shepherd so that he can be focused on the sheep and not have to be worried about the gates and the fences."

The Franciscan ideal for leadership is that it should invite and challenge the friars — brothers among themselves, whether ordained or not — "to 'minority,' to not going up, but going down," Perry said. Minority is the opposite of clericalism, which is "a drive upwards as if upward mobility offered something, some security and guarantee of fidelity, a way of controlling people so they remain faithful to the truth. Franciscans, we don't see it this way."

From 1208 to 1209 when Pope Innocent III approved St. Francis' initial rule for his order and up until 1239, Perry said, the Franciscans were allowed to elect brothers to leadership roles, including as minister general, and they did so.

Massimo Faggioli, a church historian and professor of theology at Villanova University, said that if Francis grants the friars' request, "it would signal to the whole church a shift in the sense of a de-clericalization of the religious orders and the return to the original inspiration of the founders: Francis was not a priest but a lay person, and the clericalization of the Franciscans came later."

Some people have argued that St. Francis was a deacon, but Perry said even that is hotly debated among Franciscan scholars. What is certain is that he received the "tonsure," a ritual cutting of hair that often signified preparation for ordination. But Perry is convinced that in St. Francis' case, it was simply the official sign that he had been granted permission by the bishop to preach in churches.

Loosening the link between ordination and governance increases the possibilities for recognizing the dignity, gifts, skills and call to service of all the baptized, Perry said.

Reserving most leadership roles to the ordained, he said, "has not permitted space for women and also, at times, squelched competence. It has not promoted competence and, in fact, has awarded incompetence."

A model of church leadership in which the ordained are spiritual shepherds, who also have oversight to ensure administrative and financial matters are handled appropriately, is "a different model than one in which leadership controls, that has to make sure 'I'm in charge.' That comes from personal insecurity and a lack of faith, not from the presence of faith," Perry said.

Faggioli, the church historian, told CNS that "the clergy-centered church was part of the tight relationship between church and state in the Western world of established Christendom. It was more a social and political necessity than a theological one: the state or the political authority needed to count on a reliable professional class of clergy faithful to the political authority."

But the world has changed, he said, and "the church's mission in this secularized world needs all the hands, not only the clerical ones."

While "governance is still canonically tied to ordination," the professor said, "in the real life of the Catholic Church worldwide today many key decisions are made by laypeople: Catholic education, health care, media, social work, etc. are largely in the hands of laypeople."