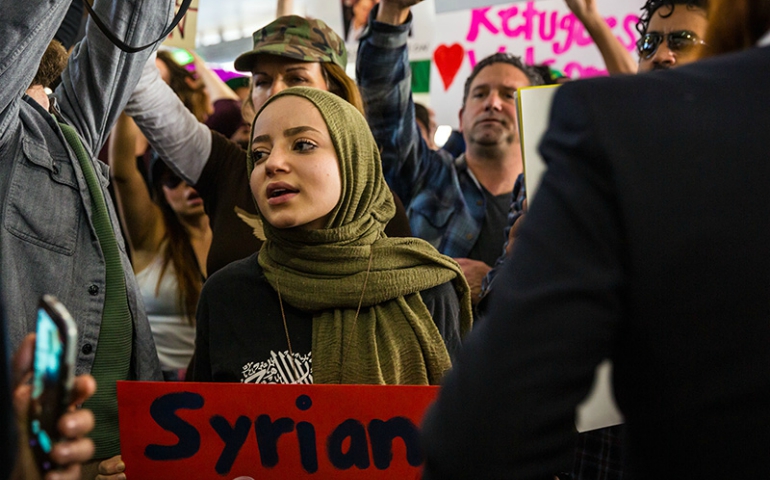 Grandparents, cousins, uncles and aunts do not make the cut, but parents, siblings, half siblings and in-laws apparently do.

The Supreme Court this week partially revived the Trump administration's travel ban affecting six Muslim-majority countries. But it made clear the ban should not apply to those with "a credible claim of a bona fide relationship with a person or entity in the United States."

Muslim and other civil rights groups charge the administration's interpretation of "bona fide relationship" is unreasonably narrow, so that a grandmother from one of those countries will not be able to visit the grandchild she raised when the ban goes into effect again at 8 p.m. Eastern on June 29.

"Irrational," said Nihad Awad, national executive of the Council on American-Islamic Relations, of the administration’s guidelines, which were spelled out in a diplomatic cable obtained by The New York Times.

"By arbitrarily dividing American Muslims from their grandparents and other close relatives overseas, the Trump administration's new rules violate the Supreme Court's decision," said Awad. "These illogical rules must not stand, nor should any other part of the discriminatory and unconstitutional Muslim ban."

President Trump has argued that the ban — which applies to Iran, Yemen, Somalia, Sudan, Syria and Libya — will increase U.S. security. The White House did not respond immediately to a request for comment.

Trump's original executive order on travel, which critics refer to as a "Muslim ban," was issued in January and quickly shut down by federal judges who called it discriminatory, based, in part, on Trump's anti-Muslim comments during the presidential campaign.

On Monday, the Supreme Court said it would rule on the executive order in its next term; in the meantime, the order could go into effect — with exceptions. Federal officials could not keep out of the country people who had been accepted to a U.S. school, offered a job by an employer or enjoy a "bona fide relationship" with a person in the United States.

The Trump rules on enforcement of the court ruling will create the same suffering that families endured before a federal judges issued injunctions against the travel bans, said immigrant advocates.

"This reported guidance would slam the door shut on so many who have waited for months or years to be reunited with their families," said Karen Tumlin, legal director at the National Immigration Law Center.

"Those engaged to be married, for example, have been cruelly left out. This reported guidance should leave no doubt that the Trump administration will exploit any opportunity to advance its xenophobic agenda."