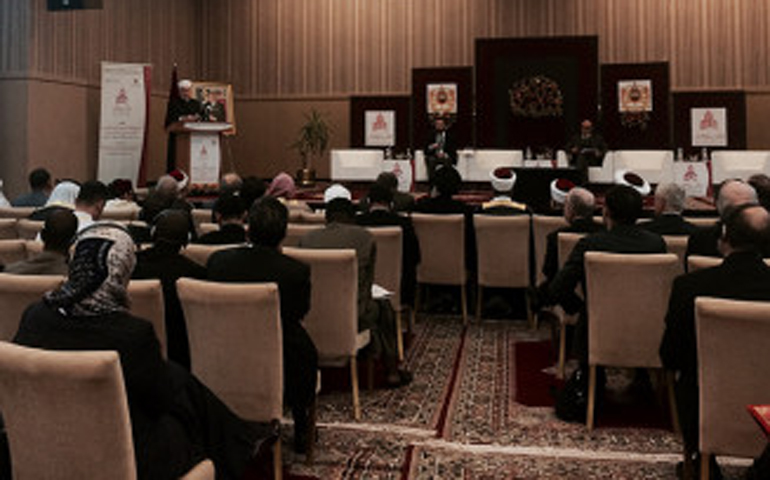 Clerics and scholars met in Marrakeshto create a declaration to preserve and protect religious minorities in the Muslim world. (RNS/Aida Alami)

In the Arab world, where I was born, we have many self-critical sayings. One of them goes like this: We, Arabs, are all talk and no action. We are swift to issue statements of denunciation and condemnation, less good at taking concrete action.

As a Coptic Christian who lived for decades in an Arab majority-Muslim country, I remembered this saying when I read about the Marrakesh Declaration to protect non-Muslim minorities in Muslim-majority communities.

At a Morocco-sponsored summit last week (Jan. 25-27) led by Sheikh Abdallah bin Bayyah, more than 200 Muslim and Christian religious leaders examined a 1,400-year-old Muslim document allegedly issued by Muhammad himself: the Charter of Medina, also known as the Constitution of Medina. This document, according to the summit, provides details for treating non-Muslims and calls for accepting a plural religious state.

There is no doubt the declaration the summit produced is remarkable. The significant question is: Will it lead to real action? One can only hope it brings real fruits and that religious freedom for minorities will become a reality.

But I am not optimistic.

Can we hope the Moroccan underground church will be recognized? The country recognizes only Muslims and Jews. Despite all the facts, the government claims that there are no Moroccan Christians.

Will Mauritania, Tunisia, Algeria and Libya recognize Christians and allow anyone to convert?

Will the governments of these countries allow Christians to build churches and freely worship in their faith and tradition?

Will Christianity be recognized in Saudi Arabia? Will churches be built in Mecca, like mosques are being built in the West?

Unofficial numbers tell of hundreds of thousands of Saudi converts to Christianity who cannot declare their convictions. Forget about building churches in Mecca; can Christians be allowed to enter Mecca?

What about Northern Sudan? Can we expect a new era when Muslims are free to convert to any other religion?

Minorities in Muslim-majority lands are tired of talking about religious equality. They are in desperate need of action.

According to Muslim histories, one year after this charter was issued, Muhammad approached a Jewish tribe called Banu Qaynuqa and called for its members to convert to Islam. They refused.

Muhammad then ordered a siege of the tribe, and 15 days later, they surrendered and he expelled them from their home in Medina. Almost two years later, according to the renowned Muslim historian al-Tabari, the prophet expelled another Jewish tribe, named Banu al-Nadir.

Was the charter in effect? What about the pluralistic community?

Three years after the charter was signed, Muslim historians say, a third Jewish tribe, the Banu Qurayẓa, was massacred. Muhammad and his companions seized the tribe for nearly 25 days, until its people surrendered. By decree, the men were killed, the property was divided, and the women and children were taken captive. It appears this earliest Muslim community struggled with religious pluralism.

We should hope, and keep hoping for a better day.

This declaration can do miracles if we, Arabs, do less talking, and begin to really apply religious freedom: no harassment, expulsion or executions of non-Muslim minorities, and freedom to choose one's faith.

This, I pray, will be more than talk.

[Ayman S. Ibrahim, a native of Egypt, is Bill and Connie Jenkins Assistant Professor of Islamic Studies and senior fellow of the Jenkins Center for the Christian Understanding of Islam at the Southern Baptist Theological Seminary]