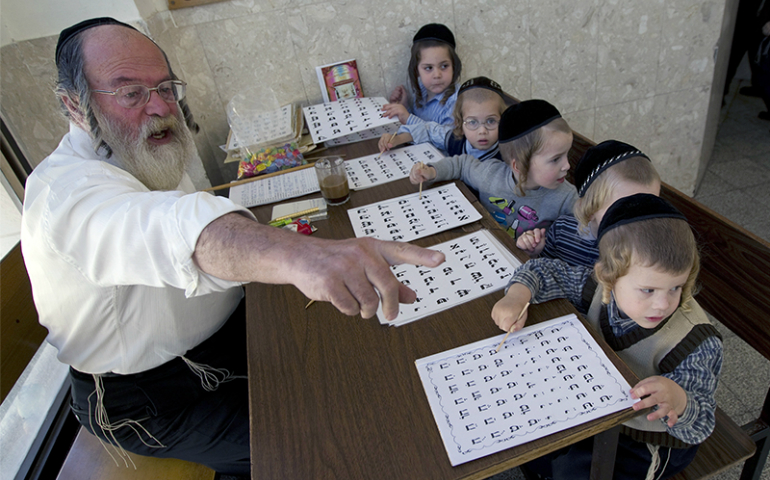 Ultra-Orthodox Jewish children sit in front of a teacher as they learn the alphabet at the Shomrei HaHoma Torah School for boys in Jerusalem's Mea Shearim neighborhood in Israel on Nov. 9, 2010. (Reuters/Ronen Zvulun)

Jews are more highly educated than any other religious group, while Hindus and Muslims are the least educated, the first-ever global study of religion and education shows.

Jews go to school for 13 years on average, and Muslims and Hindus for six years, according to the report, released Dec. 13 by the Pew Research Center. The study shows vast gaps among religious groups in educational attainment. But education levels globally are rising, and no faith group is left behind.

"Even those group that are relatively disadvantaged are making considerable progress across generations," said Conrad Hackett, the study's lead researcher. "That's a story of hope if you consider getting more education to be a good thing."

Christians are the second-highest educated religious group in the world, with nine years of education, followed by the religiously unaffiliated, and then Buddhists.

These global findings are not perfectly reflected in the U.S., where Muslims and Hindus are often better educated than the Christian majority. In America — as in many countries — highly educated minorities have been welcomed, and often have the means to migrate. In the U.S., 96 percent of Hindus and 54 percent of Muslims hold a college degree, compared to 36 percent of Christians.

While the overall global picture is one of progress, it is also one of educational poverty.

"Despite recent gains by young adults, formal schooling is neither universal nor equal around the world. The global norm is barely more than a primary education — an average of about eight years of formal schooling for men and seven years for women," the report concludes.

And education is highly correlated with religion. Four in 10 Hindus and more than one-third of Muslims have no formal schooling, while 1 in 10 Buddhists and 1 in 100 Jews lack any education.

The factors driving these disparities vary, experts say, from differing attitudes toward education within religious groups, to their distribution among societies where education is compulsory and valued. Some scholars have argued that the work of Christian missionaries has had a positive effect on education levels in areas in which they have worked. As for the particularly high level of educational attainment among the world's 13 million Jews, "there’s a culture of literacy that predates modernity," said Steven M. Cohen, a professor of Jewish social policy at Hebrew Union College who advised the Pew researchers on the study.

Jewish tradition, at least among men, has demanded literacy from its adherents, not just its religious leaders. "Jews need to learn Hebrew in order to pray — they need to pray from a prayer book," Cohen said. "Jewish prayer services are just much more participatory. They require more familiarity with the text, as opposed to reserving the study of sacred text for an elite."

And for millennia anti-Semitism often forbade Jews from owning land and farming, and otherwise limited their choices for making a living, so they were forced into more entrepreneurial jobs, such as trading, that required literacy and numeracy, Cohen said.

Steven M. Cohen, professor at Hebrew Union College. Asked if the study might unintentionally fuel rising anti-Semitism, which today as in the past traffics in conspiracy theories that paint Jews as clever, conniving forces, Cohen said it shouldn't make a difference.

"Anti-Semites are already convinced," he said. "But I know many Jews are still worried about their place in society, and worry about appearing too successful because that’s been an anti-Semitic trope."

The wide gap between the world's best and least educated groups is also partly a function of where these groups tend to live in the world, the Pew researchers found.

The vast majority of Jews live in either the U.S. or Israel, highly developed countries with high levels of education overall. But 98 percent of Hindu adults live in the developing countries of India, Nepal and Bangladesh, where a solid education is available to only a minority.

The study relied on the best and most recent data available from 151 countries, representing 95 percent of the world's population. The numbers indicate the quantity of education, but do not indicate its relative quality.

The data returned many surprises, Hackett said. Gaps between groups in education were often wider than researchers predicted, even within the same nation.

"We see this huge gap in sub-Saharan Africa between Christians and Muslims," Hackett said. Muslims are more than twice as likely as Christians there to have no formal schooling. He hopes such findings spurs government and other leaders to factor in religion as they try to raise education levels overall.

"Religion along with education are two of the things that have the biggest influence on our life outcomes, along with the kind of family we have and the kind of job we have," he said.