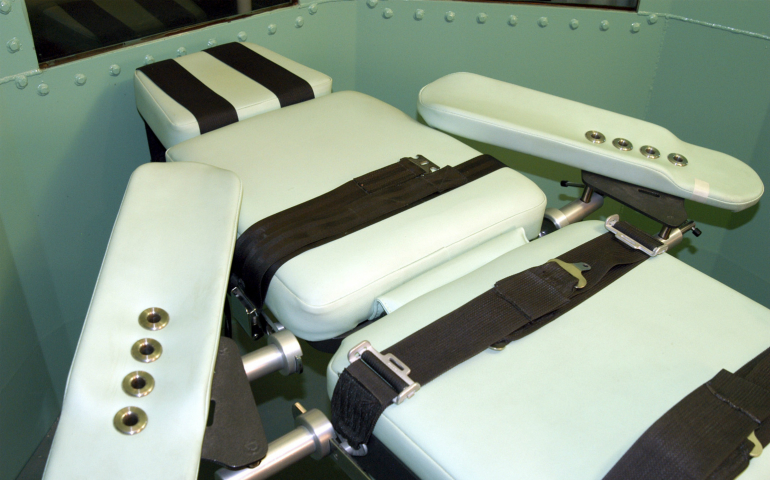 This undated photograph shows the table where executions are carried out by lethal injection at San Quentin State Prison in California. (CNS photo/courtesy of California Department of Corrections)

Update: One of Ricky Gray's attorneys contacted NCR about Judge Henry E. Hudson's decision, specifically about Hudson's ruling on their client's timing. Attorney Rob Lee, who is handling Gray's clemency case, told NCR that Gray wasn't informed about the drugs until October. "What I find strange about [the judge's] finding about this is he’s saying we should have filed this lawsuit years ago… when the [injection drug] protocol in place is not the same protocol," said Lee. In the reply brief filed prior to Hudson's ruling, Gray's defense team writes, "Mr. Gray would suffer an enormous hardship if Defendants were to kill him using an unconstitutional method of execution. Defendants do not dispute that.… Perhaps recognizing these facts, Defendants’ principle equitable argument is that Mr. Gray somehow delayed in bringing this action. This argument is misleading: It ignores the nature of Mr. Gray’s claim — that he is challenging the use of compounded midazolam and compounded potassium chloride, about which he only recently learned — and his ongoing efforts to exhaust his administrative remedies."

A Virginia judge on Jan. 10 denied convicted killer Ricky Javon Gray a delay in his execution.

Gray, who is scheduled for execution on Jan. 18, filed a motion Dec. 16 asking for the execution to be stayed due to the state's usage of a compounded form of midazolam. Gray's legal team claims that the drug's use violates his Eighth Amendment right to not be subjected to cruel and unusual punishment.

"This is not an instance where there are any questions as to innocence or sufficiency of due process of an individual set to be executed," Hudson wrote in his opinion. "Gray fails to put forth any evidence that compounded drugs, in and of themselves, pose a risk that is 'sure or very likely to cause serious illness and needless suffering,' " (language used in Glossip v. Gross).

"If Gray acted with appropriate diligence, he would have had ample opportunity to address his concerns without disrupting the execution date set by the state court. By waiting as long as he did, Gray 'leaves little doubt that the real purpose behind his claim is to seek a delay of his execution, not merely to effect an alteration in the manner in which it is carried out,' " Hudson wrote, using language from Harris v. Johnson.

Gray's team plans on appealing the decision with the 4th U.S. Circuit Court of Appeals.

"Midazolam is not appropriate for use in lethal injection executions. The Virginia Department of Corrections (VDOC) plans to use midazolam, in its compounded form, which has never been used before in a U.S. execution," said Lisa J. Fried, the attorney representing Gray's lethal injection case.

She added, "The string of problematic executions is the inevitable result of using the sedative midazolam in combination with drugs that cause excruciating pain. It is our position that it is unconstitutional for the VDOC to carry out an execution that risks chemically torturing a prisoner to death. We will continue to challenge this risky proposed method of execution."

Midazolam, the drug at the center of Gray's litigation case, has recently had a role in botched executions. Last month, Ronald Bert Smith, Jr. was executed in Alabama using midazolam. According to the Associated Press, Smith "reportedly coughed, clenched his fists, and raised his head during the execution, forcing prison officials to conduct two consciousness checks to determine whether Smith was properly sedated before administering the final two drugs."

Ricky Gray in a recent photo

There were similar issues in the executions of Dennis McGuire in Ohio, Clayton Lockett in Oklahoma, and Joseph Wood in Arizona.

The drug was also central in a Supreme Court case in June 2015 where inmates on death row in Oklahoma filed a similar case to Gray's. The judges ruled 5-4 that the drug was constitutional.

While the proceedings for Gray's litigation against the compounded version of midazolam continue, a clemency case has been submitted to Virginia Gov. Terry McAuliffe.

"More than 50 mental health professionals and child advocates, including the two immediate past Commissioners of the Virginia Department of Behavioral Health and Developmental Services, have submitted a letter to Governor Terry McAuliffe expressing their support for commuting the death sentence of Ricky Jovan Gray to life imprisonment without parole," Jonathan Sheldon and Rob Lee, attorneys working on Gray's clemency case, wrote in a press release.

The letter submitted by the mental health professionals to McAuliffe on Jan. 10 acknowledges Gray's "horrible" crimes that required a "strong punishment." Gray was convicted of killing four people in 2006*. Gray was given the death penalty specifically for the deaths of two children under the age of 10. He was given a sentence of life in prison for the death of their parents.

Those who signed the letter also acknowledged the neglect, sexual and physical abuse Gray suffered as a child, which later contributed to his drug abuse.

"In Mr. Gray's case, his abuse and trauma were left unaddressed and predictably led to profound despair and other serious trauma symptoms, drug addiction, and the drug use that resulted in the tragic crimes he committed with Ray Dandridge," the letter states.

Dandridge — Gray's nephew — was similarly tried for the murders but was sentenced to life in prison without parole in return for pleading guilty to the charges.

In addition to the letter, Gray's legal team have submitted evidence that was not presented during his initial trial and sentencing.

"This evidence should have been presented to the jurors deciding whether to sentence Gray to death. Gray was under the influence of powerful drugs, including psychosis-generating PCP, at the time of the crimes. He was introduced to the drug as a child, and became addicted as a way to try to block out the effects of the physical and sexual abuse he suffered for years at the hands of his family members. Ever since he has been free from PCP, Gray has exhibited no violent behavior, and has been a model inmate," according to Sheldon and Lee's press release.

Included in the press release was a statement from Gray who reports he has "never had a clear memory" of the crimes because of his drug usage at the time.

"Remorse is not a deep enough word for how I feel. … It's never left my mind, because I understand exactly what I took from the world by looking at my two sisters. I'm reminded each time I talk and see them that this is what I took from the world. You know, the potential for greatness in those kids. I'm sorry they had to be a victim of my despair," Gray was reported as saying.

Also joining the appeal for clemency is the Virginia Catholic Conference.

"In Virginia, the Governor has the authority to commute death sentences to life in prison. We ask Governor McAuliffe to exercise this authority in Ricky Gray's case, just as we make this appeal in every instance when an execution is scheduled in Virginia," the conference's executive director Jeff Caruso told NCR in a statement last month.

*Editor's Note: An earlier version of the story reported that Gray was convicted of killing seven people in 2006.