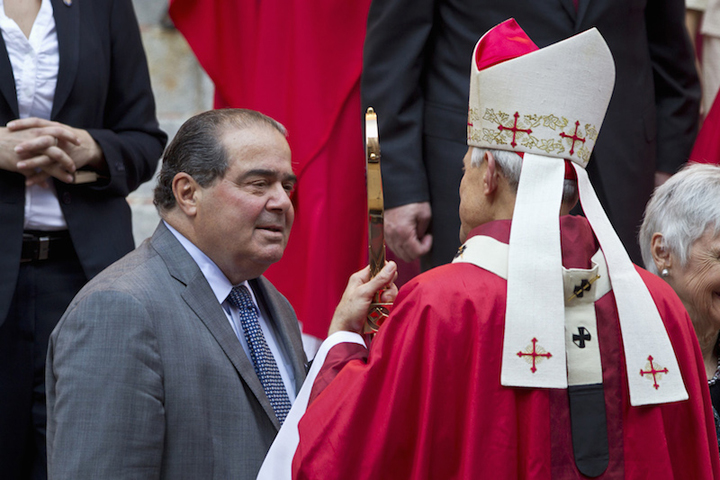 Supreme Court Justice Antonin Scalia, left, talks with Cardinal Donald Wuerl, the archbishop of Washington, at the conclusion of the annual Red Mass held at the Cathedral of St. Matthew the Apostle in Washington, Sept. 30, 2012. (Reuters/Benjamin Myers)

Supreme Court Justice Antonin Scalia’s funeral will be held Feb. 20 at the Basilica of the National Shrine of the Immaculate Conception, the largest Roman Catholic church in North America, according to media reports.

The late justice will lie in repose at the Supreme Court on Friday, following in a tradition last observed after the death of Chief Justice William Rehnquist in 2005.

CNN, National Public Radio and NBC News were among the first to report the funeral arrangements Tuesday.

The court’s senior justice, Scalia, 79, was found dead Saturday at a West Texas ranch during a hunting trip. His death has touched off a political battle over President Obama’s intention to nominate a successor.

Senate Republican leadership and GOP candidates for the 2016 election insist that Obama should hold back and that the next president should choose the nominee.