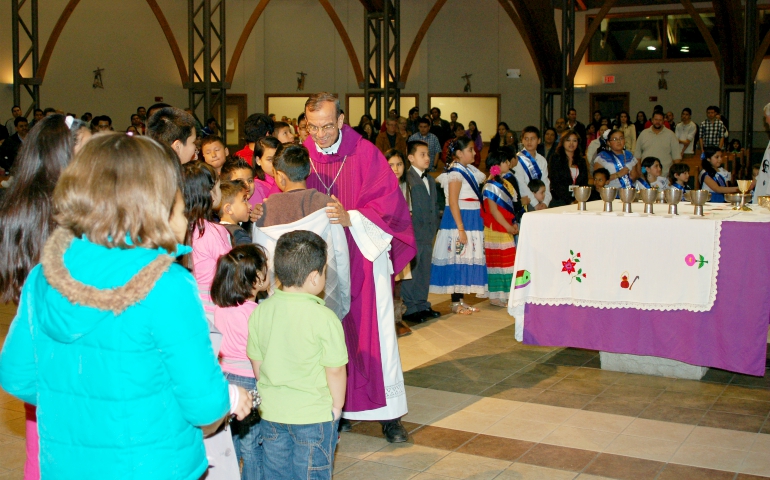 "Everybody was excited to hear the news, even my family in Soyapango," said Alvarado, a Salvadoran native who now lives in the greater Kansas City metropolitan area.

Rosa Chávez, who will assume his new role on June 28, is well-known in El Salvador and among Salvadoran communities in the United States for following the footsteps of Blessed Archbishop Oscar Romero.

"A man who can walk in Romero's footsteps — like Rosa Chávez — and has an authority of the church as a cardinal ... that's miraculous. It's remarkable," said Jim Caccamo, a member of Kansas City's St. Peter's Parish, which has a sister parish in El Salvador that parishioners have regularly visited since 1989.

Alvarado was an 11-year-old girl living Soyapango, El Salvador, when Romero was assassinated less than 30 minutes away in San Salvador on March 24, 1980. Romero was celebrating Mass at a chapel inside the Divine Providence Hospital when an anonymous gunman emerged from a vehicle and shot the archbishop in the heart before driving away.

Six days later, more than 250,000 mourners from all over the world attended Romero's funeral Mass at the Metropolitan Cathedral of San Salvador, including Alvarado's mother and older sister. During the Mass, smoke bombs went off in the streets and unknown riflemen began shooting service attendees. Reports estimate more than 30 people were killed in the massacre.

Alvarado's mother and sister became separated amid the stampede.

"I remember my mom coming home without my sister and my grandma was so, so upset and told her, 'You need to pick her up,' " Alvarado said. "Fortunately, people from the Red Cross found [my sister] and brought her home. ... People helped her jump the cathedral's fence and kept her safe inside."

Alvarado's story isn't unique. Romero's assassination was part of the 12 years of civil war that left tens of thousands of people dead.

In 2015, Francis beatified and declared Romero a martyr for dying at the altar in response to speaking out against the Salvadoran government oppressing its people and violating human rights.

Rosa Chávez was one of Romero's closest collaborators when he was alive.

Every March since 2008, St. Sabina Parish in Belton, Missouri, a suburb of Kansas City, has commemorated Romero's death anniversary with a special Mass and celebration of his life that includes live music and homemade Salvadoran cuisine. About 300 people from the Kansas City metropolitan area attend the event every year.

Since the Romero celebration's inception, Rosa Chávez has visited St. Sabina four times, most recently in 2016. Over the course of his visits, he has established a close relationship with the St. Sabina community, including the 50 Salvadoran families who are part of it and nearby parishes.

Alvarado, who serves on the Romero celebration committee, said naming Rosa Chávez a cardinal is a big step in the right direction for the Catholic Church.

"When I heard the news, I was so, so happy because sometimes people don't recognize your efforts and everything you're giving people from God," she said. "But Pope Francis found out [Rosa Chávez is] a good person. I think you can feel the Holy Spirit in Rosa Chávez. He supports poor people and he makes the Gospel real in his life and he follows Jesus. This is an incredible blessing."

Fr. Jeff Stephan, pastor of St. Sabina since 2012, said naming Rosa Chávez the first cardinal from El Salvador is the pope's way of emphasizing the need for social justice and taking care of the poor within the Catholic Church, and also solidifying Romero's legacy.

"This is tremendous news because [Rosa Chávez] was instrumental in the beatification of Oscar Romero," Stephan said. "We need cardinals and bishops that can relate to the poor, and Pope Francis is instructing all bishops, priests and laity to go out and smell like the sheep — love and help those in need. That is Bishop Chávez."

"Making [Rosa Chávez] a cardinal, I think, was such a strong statement by the pope about preferential treatment to the poor," he said. "He could not have it done in my mind much better than to do what he did in making Rosa Chávez a cardinal. It speaks volumes about what the pope is trying to do."

José López moved to Los Angeles from his hometown of Departamento de San Vicente, El Salvador, in 1990 to stop running away from the guerillas and to avoid mandatory military service. He moved to Kansas City eight years later and is now a parishioner at St. Sabina.

"Back then, it was a very abusive government. We had a lot of family members that got tortured and killed by the military," he said. "A lot of times, they forced their way into our houses, breaking in looking for guerillas or anything to blame us and claim we were connected with guerillas. ... They just killed people and threw bodies anywhere, and Monseñor Romero helped people find relatives who were abducted."

López said he still has family in El Salvador who update him regularly about the current gang violence in the country.

"They just adjust to the situation," said López, who most recently went back to El Salvador for a month last year. "But making [Rosa Chávez] a cardinal gives us great hope."

Caccamo, Stephan and Alvarado expressed the same feelings of hope for El Salvador and the Catholic Church with Rosa Chávez becoming a cardinal.

"There is for me an aura of the Holy Spirit around [Rosa Chávez]," Caccamo said. "He is so gentle yet so firm. ... He is the embodiment of speaking the truth with love."