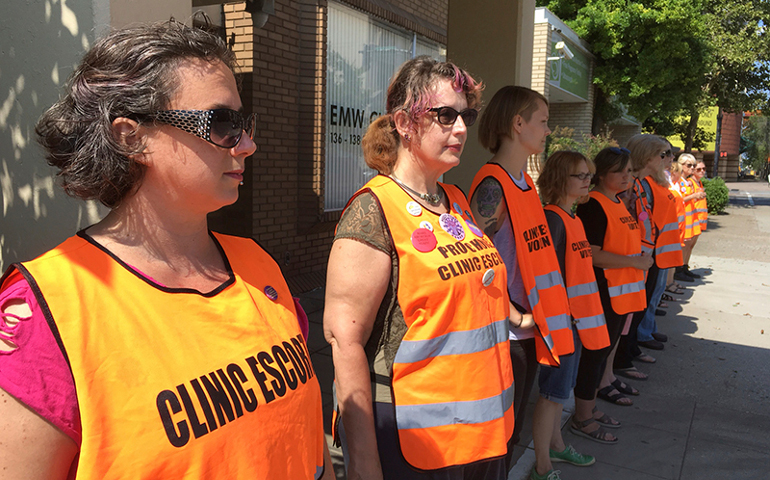 In this Monday, July 17, 2017 photo, Meg Stern, left, and other escort volunteers lined up outside the EMW Women's Surgical Center in Louisville, Ky. (AP Photo/Dylan Lovan)

Both sides in the abortion fight raging in Kentucky agree on one thing: The stakes are as high as ever in a state that could become the first in the nation without an abortion clinic.

Political pressure has intensified since the Kentucky GOP took control of state government and moved quickly to pass new restrictions on abortions. And Republican Gov. Matt Bevin makes no apologies for waging a licensing fight against a Louisville clinic that is the last remaining facility performing abortions in the state.

Another battle-tested participant joins the fight this weekend. Operation Save America, a Christian fundamentalist group, plans to mobilize hundreds of activists to protest against EMW Women's Surgical Center.

The group's leaders state their purpose unequivocally: to rid Kentucky of its last abortion clinic. Some of the group's followers were arrested during a protest outside EMW in the spring. The group has said it won't use those same tactics in the coming days, but a federal judge on Friday ordered the creation of a "buffer zone" to keep protesters out of an area in front of the clinic. The pre-emptive move was requested by federal prosecutors to prevent protesters from blocking access to the surgical center.

"We have never been under siege like this," Dr. Ernest Marshall, a co-founder of the clinic open since the early 1980s, recently told The Associated Press. "We have never had any question as to whether we would exist."

For years, protesters have been a fixture outside Marshall's clinic, a plain brick building in Louisville's bustling downtown. Blinds are drawn to keep people from peeking inside.

Volunteers in bright orange vests stand watch near the clinic, walking patients past sign-waving activists. On a recent morning, as a demonstrator held a sign that said: "Abortion an American Holocaust," a child walking nearby asked a woman what holocaust means.

As a volunteer whisked another woman past a handful of protesters, a demonstrator clutching a rosary told the patient's male companion: "Men don't kill their babies. Man up." The man turned and glared but said nothing.

"This is the last chance we'll get to talk to them before they go in," the retired sheet-metal worker from Indiana said. "I just wanted him to think about what he's doing. If anybody believes in God, they can't be for abortion, in my opinion."

The 66-year-old Marshall — the father of three grown children and grandfather of eight — said he attends church every Sunday and is a former Sunday school teacher. He said abortion protesters don't have a "monopoly on morals." He condemned their tactics as "very harassing, very judgmental," taking a toll on patients and staff.

"Some of the things I see out in front of our clinic, to me, by the pro-life people, don't represent good Christianity," Marshall said. "I just don't think Jesus would harass people or name-call people or call doctors murderers."

The number of protesters is expected to surge this weekend when Texas-based Operation Save America converges on Louisville for a weeklong vigil, with the long-term goal of making Kentucky a national model in its push to end abortion. The group urges state officials to ignore the Supreme Court's Roe v. Wade decision in 1973 that legalized abortion.

Its activists plan to demonstrate outside the clinic, elsewhere downtown and in the neighborhoods where the clinic's doctors live, organizers said.

The buffer zone in front of the clinic won't deter those vigils, said Rusty Thomas, the group's national director.

Brigitte Amiri, an attorney for the ACLU Reproductive Freedom Project, said the buffer zone gives patients a "small measure of relief," ensuring they can enter.

The clinic has been on the defensive since Bevin's election in 2015 put a social conservative and ardent abortion foe in the governor's office. Early this year, abortion opponents pushed through two bills signed by Bevin. One measure banned abortions in Kentucky after 20 weeks of pregnancy unless the mother's life is in danger. The other requires the abortion doctor or a "qualified technician" to perform an ultrasound and then try to show fetal images to the pregnant woman before she consents to an abortion.

The law is being challenged in federal court, along with another case in which abortion rights supporters say Bevin's administration tried to shut down EMW earlier this year. State officials said the clinic was out of compliance with its hospital and ambulance service agreements. EMW sued, and Bevin's administration agreed to renew the clinic's license until after the lawsuit is resolved. A September trial is scheduled.

EMW's legal team believes the case "falls squarely" within a 2016 U.S. Supreme Court ruling that struck down Texas regulations that required doctors who perform abortions to have admitting privileges at nearby hospitals and forced clinics to meet hospital-like standards for outpatient surgery, said Heather Gatnarek, an attorney with the American Civil Liberties Union of Kentucky.

The Supreme Court has found that access to an abortion must be guaranteed, but it remains to be seen whether eliminating every clinic in a single state would pass that test.