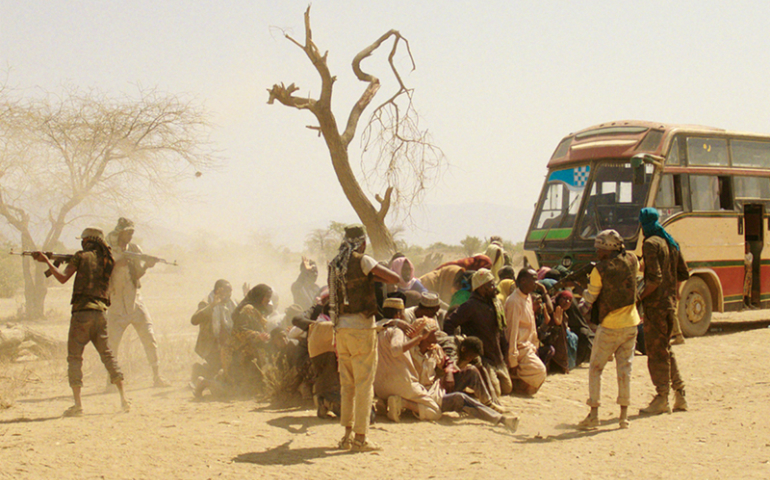 A scene from the "Watu Wote" film, based on the militant ambush of a Mandera, Kenya, bus in December 2015. (Hamberg Media School)

A bus attack in northern Kenya during which Muslims shielded Christians from al-Shabab militants is the subject of a fictional film adaptation that focuses on religious integration and coexistence.

"Watu Wote," Swahili for "All of Us," is based on the militant ambush of a Mandera bus in December 2015.

Gunmen sprayed the bus with bullets, killing two passengers. But when they asked the 62 Muslims to identify the Christian passengers, the Muslims refused, telling the militants to kill everyone or leave.

Salah Farah, a teacher who was shot during the incident and died weeks after, became a symbol of unity.

"We were touched by the story … that in a situation like this one humanity could win," said Katja Benrath, the film’s director and a student at Hamburg Media School in Germany.

"In this life-threatening moment, people stood up for each other — not caring about the religion of the next person because they wanted to save and shield human beings," Benrath said.

That message is especially important during this time when Muslims are being viewed with suspicion or fear, she added.

While in Kenya, the producer said she encountered many Christian-Muslim friendships.

Although the three German students filming the 20-minute documentary conducted their research in Mandera, the film was shot in other regions with a similar landscape.

"Even when we travelled to Mandera and talked to people, they showed respect for each other and were aware that they needed one another to build a strong community," Benrath said.

"It is very positive development," said Salat. "Once it is released, it should be distributed and showed across the country to boost Christian-Muslim relations."

The Rev. John Musyoka, a Roman Catholic priest in Mandera, said the film will help change the narrative that Muslims are terrorists.

"Anything that works to advance further this positive gesture is very welcome," he said.

The film is due for release next month.