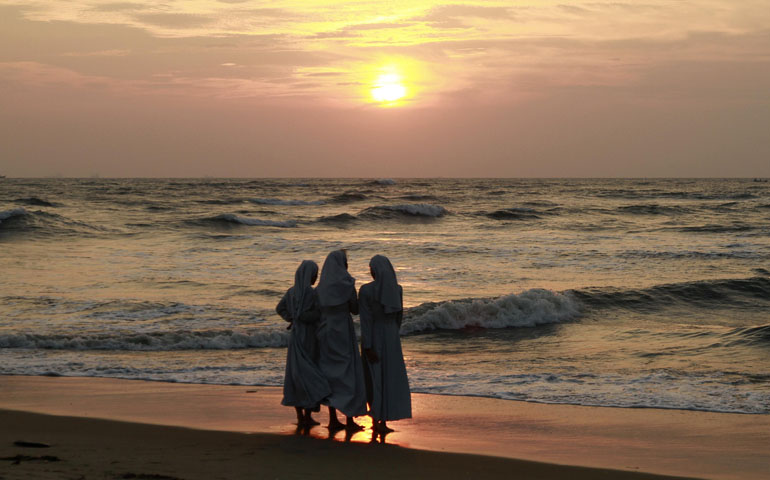 Nuns stand on a beach in Cochin, India, in this 2014 file photo. (CNS/Sivaram V, Reuters)

In the wake of an Associated Press article that detailed accounts of sexual abuse of Catholic sisters by clergy in several countries, the Leadership Conference of Women Religious urged women religious to report such incidents to civic and church authorities, and called upon church leaders to "end a culture of silence, hold abusers accountable, and provide support to those abused."

LCWR, the largest leadership organization for U.S. Catholic sisters, released a statement responding to an inquiry from an AP reporter investigating instances of sexual abuse of Catholic sisters by clergy in the United States.

"LCWR does not have data on incidents of sexual abuse by clergy of Catholic sisters in the United States," the statement said. "If sisters have endured sexual abuse, we would urge them to report the abuse to civic and church authorities, and to seek appropriate assistance since no one should have to suffer the long-term effects of abuse alone. We understand that reporting abuse requires courage and fortitude, however, bringing this horrific practice to light may be the only way that sexual abuse by those in positions of trust in the church community will be put to an end."

The AP article said its "examination has found that cases have emerged in Europe, Africa, South America and Asia, demonstrating that the problem is global and pervasive, thanks to the universal tradition of sisters' second-class status in the Catholic Church and their ingrained subservience to the men who run it."

Some nuns are now going public, the AP article said, gaining courage from the #MeToo movement, the recognition that adults can be victims of abuse when there is an imbalance of power in a relationship, and inaction by church leaders "even after major studies on the problem in Africa were reported to the Vatican in the 1990s."