Skip to main content
Spirituality
A version of this story appeared in the Dec 4-17, 2015 print issue under the headline: "Lebanese interfaith group grounds work in 'spiritual solidarity' with the other". 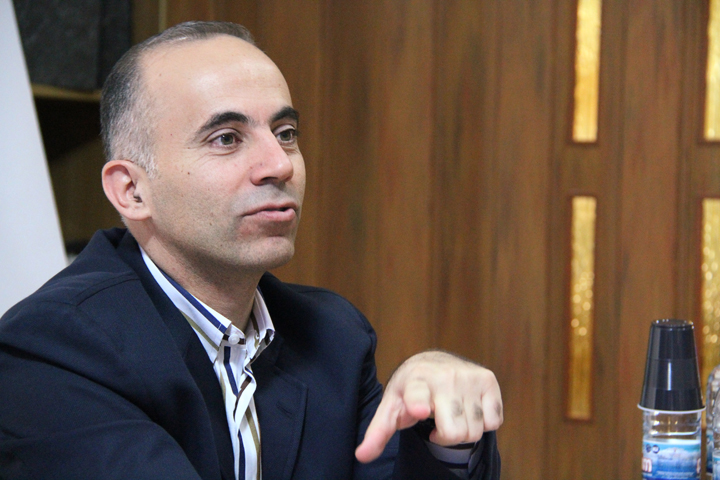 Fr. Fadi Daou: "We are talking about ... recognizing, in Christian terms, that the Holy Spirit is working in the experience of others." (CRS/Kim Pozniak)

It is a common paradox that one can find remarkable examples of interfaith cooperation within the most sectarian, conflict-ridden corners of the world. Such is the case with Adyan, a Lebanese foundation promoting interreligious engagement in a region where religious identities are often a source of division. Established in 2008, Adyan’s educational efforts include courses in cross-cultural studies, curriculum development in co-existence, media training, and annually hosting a national day of interfaith prayer.

Adyan’s concept of “spiritual solidarity” undergirds all these efforts. Adyan co-founders Fr. Fadi Daou, a Catholic priest and theology professor, and Nayla Tabbara, a Muslim professor of science of religions and Islamic studies, explain. This interview has been edited for length and clarity.

Tabbara: The expression itself is not an invention of Adyan. It is taken from the 1994 pastoral letter of the patriarchs of the Orient, “Called Together in Front of God.” The document’s definition of spiritual solidarity is “including the other in my prayer.”

Spiritual solidarity recognizes the richness and authenticity of the other’s spiritual experience. It is including the other in my theology. When I think of Islamic or Christian theology, I cannot develop this theology as if I lived on an island, as if only my community lived with me. I can only develop it while taking into consideration the other, that together we constitute society. So I cannot think of a political theology, a social theology without including the other.

NCR: What do you mean “the other becomes a part of my mind”?

Tabbara: When we stop at dialogue only, it is me and the other. We are just facing each other at a table, discussing. Then when we finish, each one goes back home, maybe with some questions. But I am me. I am fully me. The other is fully him, and each goes their own way.

But when we move beyond more than dialogue to real encounter, that leads to spiritual solidarity. I believe that when I go home, there is a space I gave within myself where the other dwells. I do not think anymore as if the other is outside. It’s as if I am carrying the other’s memories, the other’s history, the other’s hopes and fears with me.

To give you an example, in a country like Lebanon, where you have these communities that have hurt each other in the past, when I think about the other, it is not only the religious other, it is the other who has suffered from my group, or that my group suffered from during armed combat between the different groups.

When I allow the other space to be there, to be in me, it means I am no longer on the defensive, I am no longer legitimizing the violence that has been done toward the other group. On the contrary, I am in a place where I take on the responsibility of what has happened in the past from my own group, what my group has inflicted. I carry the hurt of the other with me, so that together we can build.