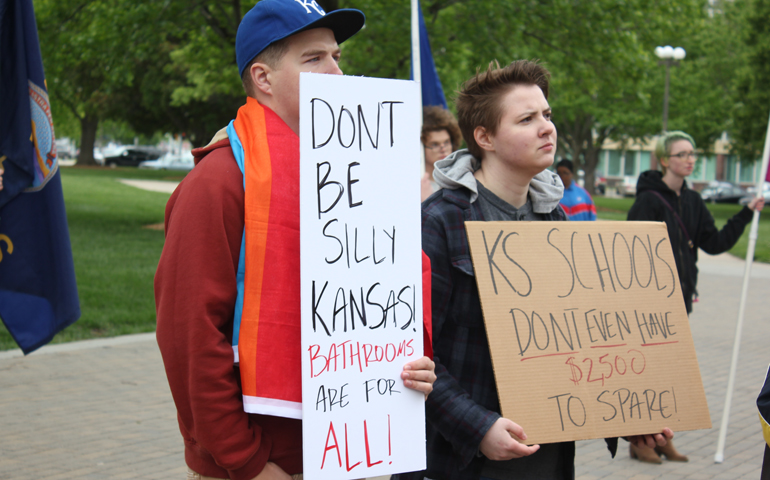 Protesters rally April 29 in Topeka, Kan., against bills that would require students in public schools to use bathrooms according to their gender at birth. (NCR/Traci Badalucco)

LGBT advocates April 29 hit the capitol steps in Kansas to protest identical bills recently introduced in the House and Senate that would require students in public educational institutions to use bathrooms according to their birth identity.

The bills come on the heel of legislation recently passed in North Carolina that bans transgender people from using the bathroom based on the sex for which they identify -- a move that has attracted national attention. Singers Bruce Springsteen and Ringo Starr both recently cancelled concerts in the state due to the law.

The Kansas bills SB513 and HB2737 -- also known as the student physical privacy act and what many refer to as the bathroom bill -- would require Kansas students on K-12 and college campuses to use the bathroom affiliated with the sex indicated on their birth certificate. The bill defines sex as "a person's chromosomes, and is identified at birth by a person's anatomy."

If passed, institutions would be fined $2,500 every time someone encounters a person of the opposite sex in the bathroom.

"This is not legislation for the governance of people of love and faith that they claim to be," said Tom Witt, executive director at Equality Kansas and the event's organizer. "This is legislation brought to us by bigotry, by fear, and by revenge," he added, calling the bills, a "horrible nightmare of legislation."

"Children and young adults have natural and normal concerns about physical privacy when they are in various states of undress, and most wish for members of the opposite sex not to be present in those circumstances," the bills state.

Almost 100 people stood in the cold and rain, many holding signs that said, "Flush the bathroom bill," and "KS schools don't even have $2,500 to spare," and chanting, "Stop this bill." Many traveled two hours from Wichita, Kan., and others 90 minutes from the Kansas City area to offer support. Some shared personal stories with NCR.

"If laws like this are enacted, and it makes children have to use restrooms based on their birth certificate gender markers, suddenly kids who are seen as complete equals by their peers are going to be outcasts and ostracized," said Debi Jackson, a Kansas City native.

Jackson, who brought her 8-year-old transgender daughter to the rally, said her family has received "a lot of backlash" from their Southern Baptist community since her daughter transitioned at the age of four. "It's something that is hard for people to understand and I understand that," she said. "But if people could just see the before and after, I don't think they would be quite as afraid."

Jackson said her daughter dealt with depression before her transition, and has since thrived.

According to The Topeka Capital Journal, supporters of the bills said they were "necessary to protect dignity, health and welfare of students when they may be in states of undress."

"Most of them wish not to be around members of the opposite sex in those circumstances," said bill supporter Sen. Mary Pilcher-Cook, R-Shawnee, according to the newspaper. "I think parents should have a reasonable expectation that children have that privacy."

But at the rally April 29, State Rep. John Carmichael, D-Wichita, compared the bill to requiring African-Americans to use separate bathrooms because of the color of their skin.

"If it didn't involve people's civil rights, it would be absurd," he said to the crowd. "And I would like to stand here and make fun of this bill, but it's too serious a matter to make fun of."

Carmichael said the bill is meant to "denigrate, to make fun of, and to abuse people because of the way they are born."

"It's wrong under my religion, it's wrong under every religion that I know of, but we have people who want to persist and prey upon the fears of others for political advantage," he said.

The day before -- on the same capitol steps -- more than 4,000 people cheered on evangelist Franklin Graham – son of televangelist Billy Graham, on his Decision America Tour 2016, according to The Wichita Eagle. Topeka was Graham's 19th stop on the 50-state tour.

Graham praised North Carolina -- his home state -- for passing its own bathroom law, according to the site.

"I understand transgender people need to go to the bathroom," he said. "But I can tell you this right now, that a man pretending to be a woman has no business in a women's bathroom or a girls' locker room," the newspaper quoted Graham as saying.

Topeka Public Schools currently allow students to use the bathroom that corresponds with their gender identity, according to Misty Kruger, director of communications. Kruger, who has been in the position for four months, told NCR there have been no complaints from parents or students with the system that's currently in place.

Witt told NCR he sees no reason for a new system. He said the issue is currently resolved on a case by case basis in Kansas, and accommodations are made accordingly at schools. "At the end of the day, everybody seems to be satisfied with the solutions that are worked out." The money incentive would exacerbate violence towards the transgender community, he said. "They'll shove each other in the bathrooms just to get the 2,500 bucks," he said. "This is something that doesn't end well. It ends with kids getting hurt or killed."

"Bathrooms are a big deal," Cameron Broyles, 26, a transgender male who drove an hour from Fairview, Kan., told NCR. "I don't go by myself and I don't go unless someone scopes them out for me already." Broyles said he has been both physically and sexually assaulted because he's transgender.

The Kansas Legislature adjourned May 2 for the year without further action on the bills.

[Traci Badalucco is an NCR intern. Her email address is tbadalucco@ncronline.org.]