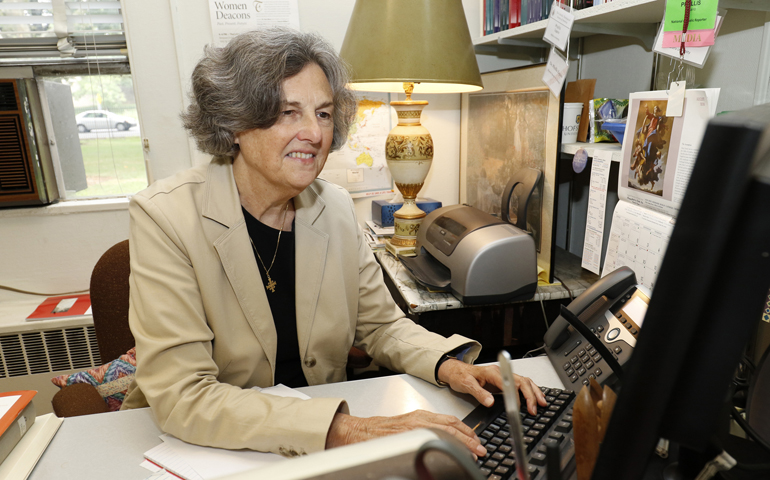 Phyllis Zagano, a senior research associate in the religion department at Hofstra University in Hempstead, N.Y., seen in her office Aug. 2. (CNS/Gregory A. Shemitz)

The members of Pope Francis' new commission to study whether women might serve as deacons in the Catholic church have expressed a wide range of views on the subject in the past, with some clearly supportive of the possibility while others say there is no firm historical precedent to follow.

Very few members of the commission -- comprising six men and six women and led by Vatican Archbishop Luis Ladaria -- have made public comments since their appointments were announced in a brief press release Aug. 2.

But as many of the appointed experts are theologians or other kinds of academics, some -- like member and NCR contributor Phyllis Zagano of Hofstra University -- have written extensively on the subject in the past.

Jesuit Fr. Bernard Pottier, a commission member and theologian at the Institut d'Études Théologiques in Brussels, co-authored a book on the diaconate in 1998 with Fr. Alphonse Borras, a priest of the Belgian diocese of Liege who is a theologian at the Catholic University of Louvain.

The book, La grâce du diaconat, Questions actuelles autour du diaconat latin ("The grace of the diaconate: Current questions around the Latin diaconate"), is now out of print.

But a summary of its contents that contains some quotations from its pages was published in a 2001 volume of the French journal Recherches de Science Religieuse ("Religious Science Research") and is available online.

The summary indicates that the authors argued that historical evidence of women serving as deacons in the early church pointed to those women receiving ordination to the diaconate in a similar way as their male counterparts.

The summary states that the book's authors cite a 1972 work by another French author -- The ministry of women in the early church by Roger Gryson -- to indicate that in the time of the early church, women deacons "indisputably make part of the clergy. They receive an ordination conferred by the imposition of hands and a prayer of the bishop."

The summary says that the authors note that the Latin-rite church preserved the formulae for the ordaining of women deacons until 1962, and that the authors refer to renowned Dominican theologian Fr. Yves Congar's argument that the ordination of women to the diaconate "possessed a sacramental quality."

The summary continues to say that the authors criticize Pope John Paul II's 1994 apostolic letter Ordinatio Sacerdotalis, which said the church had "no authority" to ordain women, and the 1974 document Inter Insignores from the Vatican's doctrinal congregation, which explained the congregation's earlier position against women's ordination.

The authors say those documents are a "contradiction in terms," according to the summary, as the Magisterium "cannot declare the infallible character ... of a doctrine that has already been in the possession of the Church."

The summary states that the authors conclude their work by stating that the question of sacramentally ordained women deacons is "yet to mature" and "does not fall into the category of causa finita," or case-closed.

Fr. Karl-Heinz Menke, a commission member who is also a member of the Vatican's International Theological Commission and a theologian at Germany's University of Bonn, has argued the opposite case: that historical evidence shows women deacons in the early church did not fill a "sacramental office."

In a 2013 paper in the Frankfurt-based journal Theologie und Philosophie ("Theology and Philosophy"), Menke stated: "There is clear evidence that from the third century onwards there were deaconesses. But it is equally incontestable that they were never regarded as having a sacramental office."

The German theologian cited many scholars on the subject, including: the late Fr. Aimé Georges Martimort, a French theologian who participated in the Second Vatican Council; Cardinal Gerhard Muller, the head of the doctrinal congregation; and the late Hans Jorissen, a German theologian.

Menke identified Jorissen as pro-women's ordination, and quoted from one of his works to argue that the women's diaconate in the early church was not considered at the same level as the men's diaconate.

"Even where women deacons are ordained by laying on hands and epiklesis [an invocation of the Holy Spirit] analogous to the ordination of men deacons as in the Apostolic Constitutions and above all in the later Byzantine rite, the historical findings do not allow one to speak of the two ordinations as the same," Menke quoted Jorissen.

While Menke appeared to conclude that historical evidence of women deacons does not support ordaining women into the present-day diaconate he also argued for better inclusion of women in decision-making roles in the church, stating: "Gender equality is essential."

"It may sound utopian, but a Pope could -- without infringing on sacramental ordination -- change church law in such a way as to enable church bodies which were composed equally of men and women to elect bishops and also the Pope, make it possible for women to become vicar-generals and to take on other senior church offices, and involve women in decision-making at all levels," Menke stated.

Menke reiterated several of the points he made in his 2013 paper in an Aug. 4 interview with the German daily Die Welt, stressing in particular that Francis could include women in leadership without ordaining them deacons by deciding the cardinalate "should be open to women and not only to ordained men."

The theologian also told the German paper that the members of the commission had not yet been briefed on the scope of their task, but he assumed the pope wanted the group to determine whether reintroduction of the women's diaconate would serve the church's mission today.

Franciscan Sr. Mary Melone, a commission member and the first woman president of the Pontifical University Antonianum in Rome, spoke about the possibility of women deacons in an interview with the Italian daily Corriere della Sera in May.

She spoke to the paper following Francis' promise to the International Union of Superiors General (UISG) to create a commission studying the subject.

"I believe it would be an important sign even beyond the diaconate in itself," said Melone. "Francis' affirmation expresses yet again his serious desire to guarantee women an effective, decision-making role in the church."

"It is not a question of power," she continued. "Francis does not understand the ordained ministry in the sense of power, but as service to the community."

"When we women say it is important to be at the decision-making level, where the church consults about itself, it is not to occupy spaces of power," said Melone.

"Being present in the Vatican congregations is an important objective, but it is not the only result that women desire," she said. "The essential thing is the awareness that women's authority helps the church grow."

Asked about people who will resist the idea of women deacons for fear of it leading to women priests, Melone responded: "The important thing is that there not be an excuse to exclude women from the possibility of working towards decision-making roles inside the church."

"I do not think that the ordained priesthood must be the only condition to guarantee a significant role to women," she continued. "On the other hand, it is clear that ministry guarantees forms of power precluded from others."