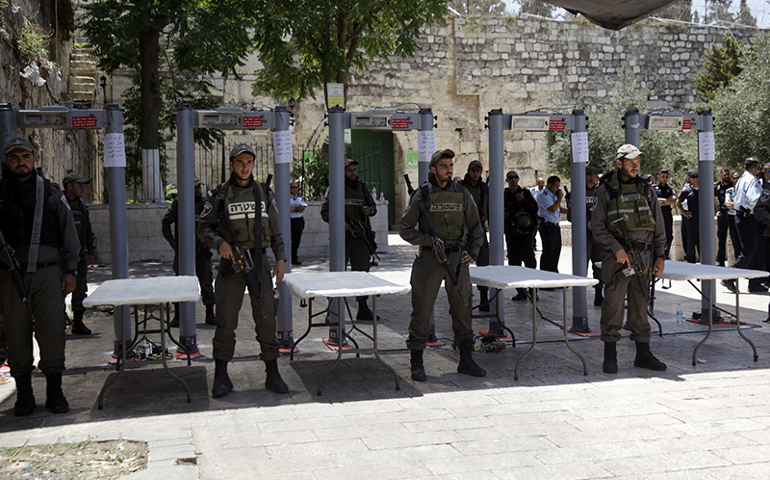 In this Sunday, July 16, 2017, file photo, Israeli border police officers stand guard near metal detectors at the entrance to the Al Aqsa Mosque compound in Jerusalem. A dispute over metal detectors has escalated into a new showdown between Israel and the Muslim world over a contested Jerusalem shrine that has been at the center of violent confrontations in the past. (AP Photo/Mahmoud Illean, File)

A dispute over metal detectors is escalating into a new showdown between Israel and the Muslim world over a Jerusalem shrine that has triggered major Israeli-Palestinian confrontations in the past.

Israel says installing the devices at the gates to the walled compound after Palestinians launched an attack there last week is a routine security measure. Palestinians claim Israel is trying to expand control over the Muslim-run site that is also revered by Jews.

Muslim worshippers have stepped up protests following an appeal from clerics to pray in the streets rather than submit to the new procedures. The confrontation could come to a head Friday, the highlight of the Muslim religious week, when tens of thousands typically converge on the holy site for prayers.

What caused the latest tensions?

Three members of Israel's Arab Muslim minority fired from the sacred compound at a police post near one of the gates on Friday, killing two Israeli officers before being shot dead. Israel's police chief said they had hidden weapons in the compound beforehand and ordered it closed for two days of searches. The closure marked only the third time the shrine had been closed since Israel captured Jerusalem's Old City and its holy sites, along with other territories, in 1967.

Why is the shrine important?

The Jerusalem landmark is the centerpiece of the Israeli-Palestinian conflict, looming large in rival national and religious narratives.

Jews revere it as the Temple Mount, or home of biblical Temples destroyed two millennia ago. It is the holiest site of their religion. For now, Jews worship at the Western Wall, a retaining wall of the compound.

Muslims believe the hilltop compound marks the spot from which Prophet Muhammad ascended to heaven. Known to them as the Noble Sanctuary, it is the third holiest site of Islam and houses the Dome of the Rock and Al-Aqsa mosques.

After capturing east Jerusalem, including its Old City, and the West Bank in 1967, Israel sought to avoid a confrontation with the Muslim world. It allowed Muslims to keep administering the Jerusalem compound. Jews could visit, but not pray there.

For decades, the status quo held, in part because leading rabbis, citing religious purity laws, banned Jews from entering. In recent years, religious opinion has shifted, and growing numbers of Jews are visiting the compound, with Israeli police and Waqf guards enforcing the no-prayer rule.

This shift has stoked Muslim fears of a purported Israeli plan to expand Jewish control there. Israel has denied this, most recently after the weekend attack when Israeli Prime Minister Benjamin Netanyahu said that the "status quo will be preserved."

Who is the gatekeeper?

Jordan and the Waqf have said that after 1967, the Waqf remained in charge of who can enter the compound. They said this rule was in place until 2000, when a provocative visit to the site by then-Israeli opposition leader Ariel Sharon helped trigger a Palestinian uprising that only ebbed in 2005.

Israel says it has always been in charge of security at the compound, including the gates.

In recent years, Israeli security forces have typically been posted outside the gates, conducting spot checks of some of those entering or holding the ID cards of suspected troublemakers until the end of prayers. At times of heightened tensions, police enforce Israeli access restrictions, such as an entry ban for men below a certain age.

Waqf guards are posted inside the gates and have the right to turn any visitors away.

Israel says the metal detectors are a routine security measure.

"Two Israeli police officers were just murdered on the Temple Mount by terrorists who smuggled in guns," government spokesman David Keyes said Tuesday. "Magnetometers are vital for security. That's why they are at the Western Wall and at holy sites around the world."

Police would not say what was found in the search of the compound. On Sunday, Israel's Army Radio quoted the Jerusalem police chief as saying officers found dozens of knives as well as slingshots, stun grenades and binoculars, but no guns or live ammunition.

Israel previously accused Waqf officials of allowing Palestinian protesters to hoard stones, sticks and firecrackers for use in confrontations with police.

Muslim clerics and Palestinian politicians contend Israel is changing the status quo under the guise of security.

Ikrema Sabri, a top Muslim official, said installing the detectors "is an attempt to impose Israeli sovereignty over the mosque" compound.

Rami Hamdallah, the prime minister of the Palestinian autonomy government in the West Bank, expressed his "absolute rejection of Israel's security pretexts in changing the status quo." He also warned of a "deterioration of the security situation" if the measures continue.

The local Muslim leadership and the Jordanian-run Waqf have urged the faithful to pray in "streets and alleys" rather than pass through the metal detectors.

Since Sunday, there have been sporadic clashes between small groups of Palestinian stone-throwers and Israeli security forces in and near the Old City. Meanwhile, worshippers have lined up in the streets, dozens at a time, to perform prayers in the streets.

The Arab League, an umbrella group of Arab countries, and the Organization of Islamic Cooperation have issued separate statements calling on Israel to lift the security measures.

Jordan's King Abdullah II spoke by phone with Netanyahu on Saturday, before the reopening of the shrine, to condemn the attack but also call for de-escalation. The two countries have discreet security ties, but frequently clash over Israel's policies at the Jerusalem site.

Jordan's ruling Hashemite dynasty, with ancestry said to go back to Prophet Muhammad, derives much of its legitimacy from custodianship over the shrine.

Safadi called for "fully and immediately reopening the holy site to worshippers without hindrances," the agency said.