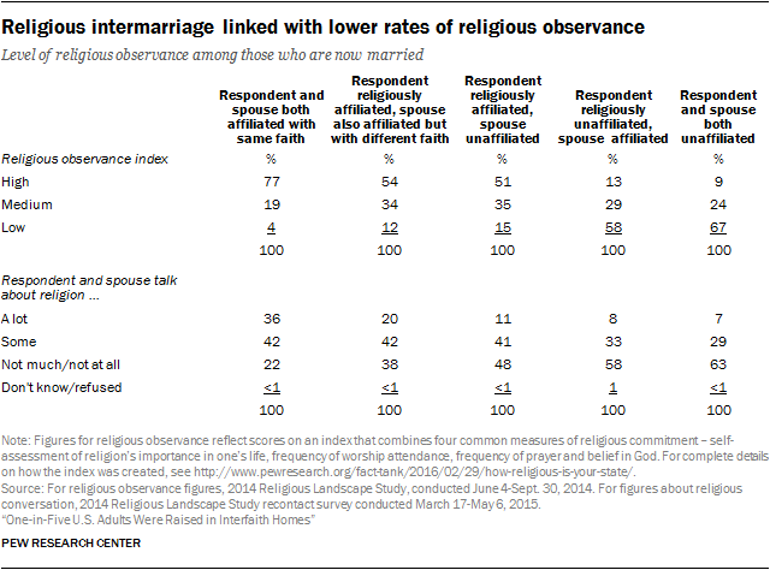 Your grandmother was right. If you marry a non-Catholic, your children are less likely to end up Catholics than if you marry a Catholic.

This was one of the findings of an examination of religious mixing in American families by the Pew Research Center.

The odds are equally bad if a Catholic marries a person of no particular faith. In this case, 32 percent of the children are Catholic, while 42 percent become unaffiliated and 20 percent become Protestant. In most of these marriages, it is the father who is unaffiliated.

The odds are better if the wife in the mixed marriage is Catholic. The children of mixed marriages are more likely to follow the religion of their mothers (48 percent) than their fathers (28 percent). Mothers pay a key role in handing on the faith. While 58 percent of adults say that both parents were equally involved in their religious upbringing, another 33 percent say their mother was more responsible. Only 5 percent say that the father was more responsible than the mother in their religious upbringing.

Almost one-in-five adults were raised in mixed marriages in the United States, but it is a growing phenomenon. Millennials are much more likely (27 percent) to have been raised in a religiously diverse family than those born before 1946 (13 percent). Nearly a quarter of Millennials had at least one parent who was unaffiliated.

One good finding in this report is that there appears to be little fighting over religion in mixed families. Only 21 percent of those raised in religiously diverse families report “a lot or some” disagreement about religion between their parents. Likewise, only 26 percent of families with a believing parent matched with an unaffiliated spouse experienced some or a lot of disagreement. Since 11 percent of spouses sharing the same beliefs also disagree about religion a lot or some, this is not a significant burden on children.

Perhaps there are no fights because religion is simply not that important. Having shared beliefs is not considered essential to a successful marriage by today’s couples. Only 44 percent of married couples say that shared religious beliefs are very important for a successful marriage. More important are “having shared interests” (66 percent), “satisfying sexual relationship” (63 percent), “sharing household chores” (61 percent), and an “adequate income” (44 percent).

The pastoral implications of the study are not to force Catholics to marry Catholics. That day is over. But special attention needs to be paid by the church to children of mixed marriages so that Catholicism is presented in an attractive way that does not alienate the child by belittling the faith or lack of it of the other parent.