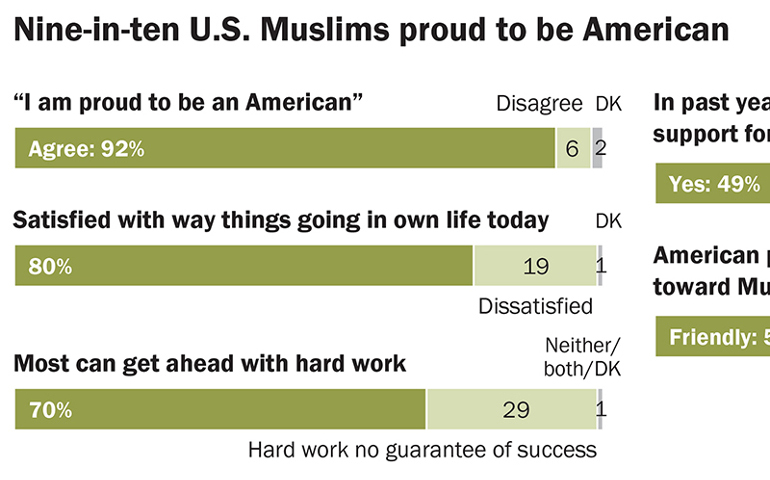 Three-quarters of the nation’s Muslims say they sense a lot of discrimination against their faith group and half say being Muslim in this country has been more difficult in recent years, a new Pew Research Center survey shows.

But even more Muslims — 89 percent — say they are proud to be both American and Muslim. A significant majority also profess a continuing faith in the American dream.

“The survey makes clear that the early days of the Trump administration have been an anxious time for many Muslim Americans,” said Greg Smith, one of the lead authors of the new survey of 1,001 Muslims conducted for several months after President Donald Trump's inauguration.

“At the same time, however, the survey also shows that Muslims express a persistent streak of optimism and positive feelings about their own lives and their place in American society.”

In the last decade, an increasing percentage of Muslims say they have experienced support from others because they are Muslim —  49 percent in the most recent survey, up from 37 percent in 2011 and 32 percent in 2007.

“In a sense, with rising Islamophobia has come more support from the general public, so I think that’s one of the reasons why Muslim Americans feel more comfortable in their place in the U.S. today,” said Amaney A. Jamal, a Princeton University professor of politics who served as an adviser on the survey.

But even as Muslims have a growing sense of American support, they report increasing instances of religious discrimination in the past year — from being treated with suspicion to physical attacks. Almost half — 48 percent —  say that was their experience, compared to 43 percent in 2011 and 40 percent in 2007.

The study also pointed to some clear divides in gender.

“Muslim women are more likely than men to say that Muslims face a variety of challenges,” said Farid Senzai, a political science professor at Santa Clara University and a survey adviser.

Researchers report a growing U.S. Muslim population — increasing from an estimated 2.35 million in 2007 to 3.35 million people of all ages today — with almost 6 in 10 born outside the U.S. The vast majority of Muslims living in the U.S. (82 percent) are American citizens.

While respondents came from at least 75 nations, their diversity extended beyond the place of their birth.

More than half (55 percent) identify with the Sunni branch of Islam; 16 percent say they are Shiite; 4 percent associate with other groups (such as Ahmadiyya or the Nation of Islam); and 14 percent don’t specify a tradition.

Respondents were young, with 60 percent of Muslim adults under the age of 40. Only 38 percent of the overall U.S. adult population is that young.

They were also racially and ethnically diverse: 41 percent were white, 28 percent Asian and 20 percent black. Eight percent were Hispanic and 3 percent were other or mixed.

“Regardless of how you split it up, there’s not a single racial or ethnic group that’s dominant within the Muslim community,” said Besheer Mohamed, a senior researcher at Pew and a lead author of the study.

Ihsan Bagby, an Islamic studies professor at the University of Kentucky, said the American ideals expressed by U.S. Muslims reflect a change from the 1980s and ’90s.

“This idea of being both American and being Muslim obviously is now the clear consensus view of Muslims,” said Bagby, another adviser on the study. “And to me it’s actually quite remarkable that we’ve come that far.”

The findings of the survey, conducted between Jan. 23 and May 2, had a margin of error of plus or minus 5.8 percentage points.

Here are a dozen other findings about U.S. Muslim adults: