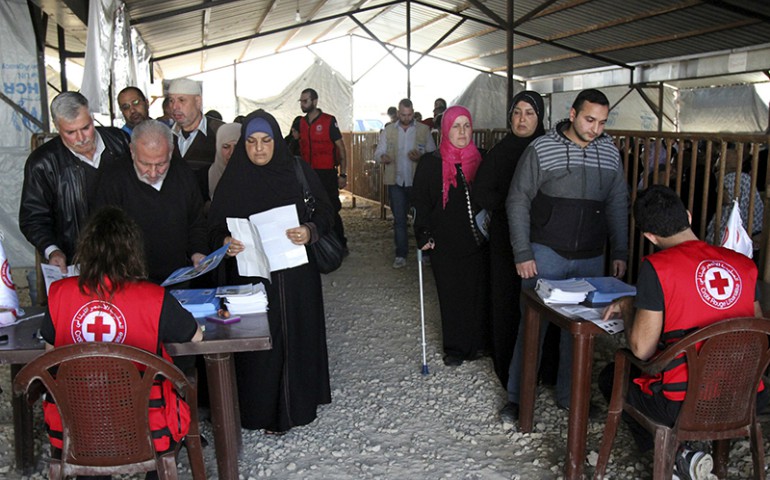 Syrian refugees line up to receive aid for the winter from the U.N. refugee agency (UNHCR) in Tripoli, northern Lebanon, on Nov. 18, 2015. (Omar Ibrahim/Reuters)

Christians made up the majority of refugees admitted to the U.S. in the first five full months of the Trump administration, reversing a trend that saw Muslims entering the country at higher numbers under President Obama, a new Pew Research report shows.

Out of all the refugees who arrived between President Trump's inauguration and June 30, about half were Christians and 38 percent were Muslims, according to data released July 12.

But when monthly figures are viewed, the data (originally from the U.S. State Department) reveals a steady decline for Muslims, from about 50 percent of refugees in February to 31 percent in June. 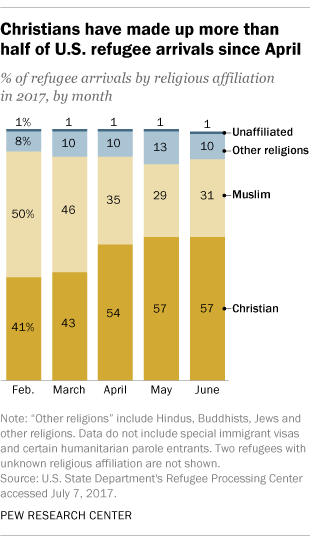 This comes at a time when the origin of most of the world's refugees continues to be Muslim-majority countries. According to the U.N. Refugee Agency, Syria continues to account for a significant proportion of newly displaced refugees, with more than half of all new refugees worldwide fleeing the conflict in that country. Afghanistan and Somalia also top the list.

Not so in America.

"As whole, we look at fiscal 2017 since October, and Muslims and Christians are about the same number," said Phillip Connor, a co-writer of the report. "But seeing the shift month to month was somewhat surprising. … It is a growing increase. It's not just that there was an immediate shift."

In the wake of Trump's executive orders restricting travel to the U.S. from seven — and under the revised travel ban, six — Muslim-majority countries, the report said, "the religious affiliation of refugees has come under scrutiny."

Yet the specific cause of this year's changes can't be fully explained.

Some refugees now arriving on U.S. shores likely applied for resettlement when Obama was still in office.

And their refugees' countries of origin have changed.

Of the top six countries of origin for U.S. refugees, three (Iraq, Somalia and Syria) are Muslim-majority. But beginning in April that changed. Now only Iraq remains among the top six nations, in addition to the Democratic Republic of the Congo, Burma, Ukraine, Bhutan and Eritrea.

Refugee admissions to the U.S. in fiscal 2017 (which ends Sept. 30) are on pace to fall below the 85,000-person ceiling established by the Obama administration for fiscal 2016, the report said.