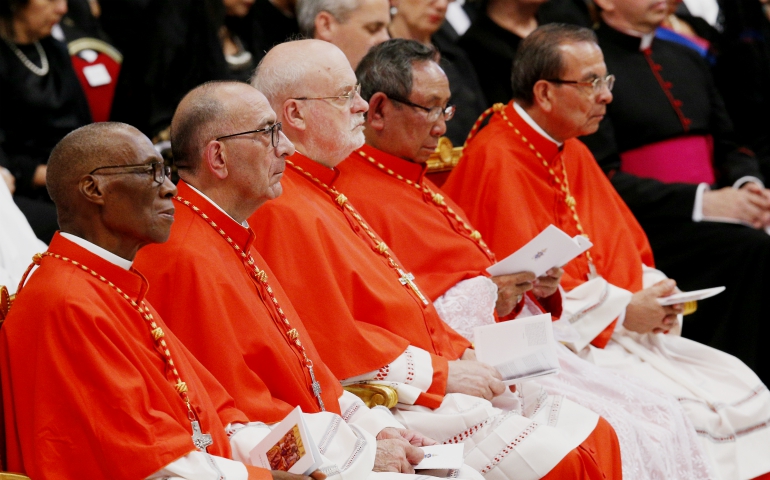 One of the five prelates Pope Francis just made a new cardinal of the Catholic Church has suggested the pope consider creating a special advisory body of women akin to the College of Cardinals to offer more opportunity for women's leadership in the church.

Stockholm Cardinal Anders Arborelius, whom Francis made Sweden's first cardinal in a consistory Wednesday, June 28, said he thinks "it's very important to find a broader way of involving women at various levels in the church."

"The role of women is very, very important in society, in economics, but in the church sometimes we are a bit behind," Arborelius said in a June 28 NCR interview. The new cardinal mentioned that Pope John Paul II had often sought counsel from Mother Teresa and Chiara Lubich, founder of the Focolare movement.

"Maybe it could be made more official," he suggested, adding: "We have a College of Cardinals, but we could have a college of women who could give advice to the pope."

The College of Cardinals is the body of all the cardinals of the Catholic Church. Cardinals are usually senior Catholic prelates who serve as bishops in dioceses or in the Vatican's central bureaucracy and have a special tie to the pope as the symbolic heads of Rome's parish churches.

While Francis has said frequently that he wants the church to have a more "incisive" presence of women in leadership in the church, he has not offered any examples of what that might look like and has reaffirmed the ban on women's priestly ordination. Church reform organizations have proposed in the past that the pope create a high-level advisory body of women.

In a half-hour interview at Casa di Santa Brigida, a pilgrim house attached to Rome's St. Bridget of Sweden Church, Arborelius also spoke about what reforms he hopes to see Francis enact at the Vatican, how he would like to see the church decentralize some authority, and the significance to Sweden of his appointment as a cardinal.

In terms of women's leadership in the church, Arborelius said he was also waiting to get more information about the history of women deacons in the church from the commission Francis has created to study that issue.

"I think it's above all a historical question to see was it really a sacramental ministry or was it something like nuns or sisters," said Arborelius. "I think that question has to be clarified.

"But I would say that's not the essential thing, but to find ways for women to really transmit the faith on various levels, whether they be deacons ... or it's more a kind of personal charism or work," he said.

Arborelius, 67, has led Sweden's Stockholm Diocese, the country's only Catholic diocese, since 1998. He said he did not know why Francis chose him to become a cardinal, but noted that Catholics in Sweden are a minority of about 150,000 in a country of some 9.8 million.

"I cannot read his heart," the bishop said of Francis' choice of him as cardinal. "But when you think about his way of acting, he has this love for the small, poor little communities ... and also for those who live far away. In the Catholic world, Sweden is a very distant reality, [a] very small Catholic community with people from all over the world."

Arborelius also mentioned the pope's trip to Sweden last October for an ecumenical event marking the 500th anniversary of the Protestant Reformation, during which Francis praised the country's acceptance of hundreds of thousands of migrants and refugees escaping violence in the Middle East.

"I know from before that the pope has appreciated the way that Sweden has received refugees," said the cardinal. "And of course the church was built up by all those people who came from all over the world. So, in a way, it's a mini-church of the universal church."

"Maybe that's one of the reasons why he wanted to encourage our little Catholic community in Sweden," he continued.

Arborelius said he had previously had brief contact with the pope when he was Cardinal Jorge Bergoglio, archbishop of Buenos Aires, Argentina. Arborelius said the two had exchanged letters some years ago when a priest of the Stockholm Diocese who was originally from Uruguay decided to retire in Buenos Aires to be closer to his family.

Arborelius said his appointment as cardinal also has an important ecumenical dimension, as most Swedes are members of the Church of Sweden, an Evangelical Lutheran denomination that used to be the official state church.

"I think it was also an encouragement for all Christians, because in a way we are all a bit marginalized in a secular society," said Arborelius. "And I think many took it as an encouragement to all Christians because we have a very good human relationship on the ecumenical level. We can work together in many fields."

"We try to work with those things where we are one in thought, one in conviction," he said. "In many issues, for instance the issues of refugees and migration, we can speak with one voice and that's very important."

He said that while Sweden is known for having a secularized culture, there are things the Catholic Church might learn from his country.

"Sweden has an open heart for questions between justice, peacemaking, [and] reconciliation," he said. "On many issues there is a common outlook, I would say. Of course there are other issues that are more difficult, abortion and so forth, but there are issues where the Swedish society can show something beautiful."

Arborelius said that he has so far not been following Francis' efforts to reform the Vatican bureaucracy closely. But he said he thinks the pope wants more "evangelical simplicity" from those who work at the Vatican.

He said he saw an example of such simplicity in the letter he received formally informing him of his appointment as cardinal, in which Francis used the word "service" three times.

"I think that's very typical," Arborelius said of the letter and Francis' style. "It's typical of the Gospel, of course, but in administration at the Vatican it's very important not to forget that everyone is there to serve God, to serve the people, to serve the church and not to make a career."

"I think that's one of [Francis'] main points in reforming the Curia, that they are there to serve and not to get privileges of any kind," Arborelius said.

Asked about recent news that the Council of Cardinals has suggested to Francis that the Vatican could decentralize some of its authority to local bishops' conferences, Arborelius said he agreed that more decisions in the church could be taken at the local level. He gave liturgical translations as an example.

"For us, it's a bit strange that we send all our translations of Swedish to the Vatican and we don't know who speaks Swedish there," he said. "There are some issues that could be handled at the local level, I think."

Amoris Laetitia and role of conscience

Arborelius also spoke about how the Scandinavian Bishops' Conference is implementing Francis' 2016 apostolic exhortation on family life, Amoris Laetitia ("The Joy of Love.") He said the exhortation and Francis' reforms of the annulment process have addressed an issue that some of the bishops had raised in their ad limina meetings over the past decades.

"One of our main problems is that when someone wants to become Catholic, he or she may have been married several times because they come from a totally different background where marriage is regarded very differently," Arborelius explained.

"It can be very hard for them to pass through a process of annulment, so if it would be easier to see that those marriages were invalid it would be very helpful for us," he said.

"Up to now, the Vatican has been very reluctant because they say there are valid marriages in the Protestant churches; there are valid marriages on the level of natural law," he said. "And that's true, but we have the experience that so many are not valid because ... already from the beginning they have this intention that we try [our] best but if it's not successful we can always divorce."

He said that in instances when it has been difficult to prove whether a marriage was ever valid in terms of Catholic teaching, he and his fellow Scandinavian bishops have had to rely on the individual's understanding of the marriage.

"That's one of the points that we would perhaps bring forth, that we have to rely more upon what they say because it's very difficult to prove that people have this intention or this lack of intention," said the cardinal. "It can be very hard but it's there."

He also said that a person's conscience "has always been regarded as the highest moral principle" and that sometimes the conscience can call for an action that is different from what priests advise.

"In many cases, this process is successful but there are always circumstances," he said. He cited the example of Blessed Franz Jägerstätter, an Austrian Catholic and conscientious objector who was executed during World War II for refusing to serve in the German army.

"He felt deep in his conscience, 'I cannot take this oath to Hitler because it's blasphemy,' " Arborelius explained. "But priests and others said, 'But you have to think about your family, that's your main responsibility.' But in his conscience, he felt, 'No, I owe that to God not to deny him through this blasphemy.' "

"That's a typical example, that there are circumstances when the personal conscience has to be obeyed," Arborelius said.